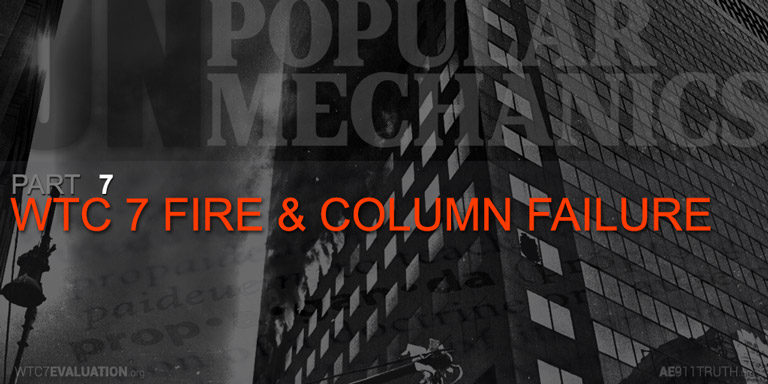 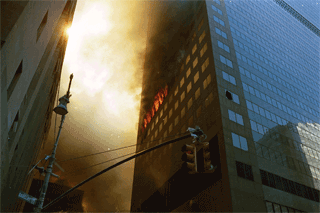 Although Popular Mechanics states the office fires in WTC 7 reached temperatures of 1,100°F, both critics and supporters of the official story with technical expertise have pointed out that there is no evidence for fires that hot.The Popular Mechanics chapter regarding the mysterious collapse of World Trade Center 7 (WTC 7) shows itself to be no more promising than its previous chapter on the Twin Towers.

PM begins this section by summarizing the history of the controversy surrounding WTC 7 and the numerous investigations carried out regarding its collapse. PM correctly notes that many agencies were located in the building as tenants, including the Secret Service, Central Intelligence Agency, Department of Defense, Internal Revenue Service, Securities and Exchange Commission, and New York City's Office of Emergency Management.1

The chapter discusses the initial FEMA investigation and how, after FEMA failed to provide an explanation for WTC 7's collapse, the task was then handed over to NIST. PM touts the NIST report on WTC 7 as having finally proved the building was not destroyed with explosives. Contrary to PM's assertion that the reason for WTC 7's collapse is “less complicated and even more remarkable” (pg 66) than controlled demolition, it is apparent that the cause of collapse is still demolition, and that the NIST WTC 7 report utterly fails to provide a reasonable explanation of what actually caused the collapse of the building.

The first section of PM's WTC 7 chapter mainly discusses the fire and damage to WTC 7 and how this supposedly caused the building to collapse. Here is a summary of what NIST claims caused the collapse of WTC 7:

However, each of these points in this fantastic scenario is problematic:

Concrete expands at 85% the rate of steel. Leaving this expansion out of the calculations in order to show failure of the shear studs is both unscientific and fraudulent.

David Ray Griffin noted in The Mysterious Collapse of WTC Seven: Why NIST's Final 9/11 Report is Unscientific and False:

[I]f NIST did engage in fraudulent science, this would not be particularly surprising. NIST is an agency of the US Department of Commerce. During the years it was writing its World Trade Center reports, therefore, it was an agency of the Bush-Cheney administration. In 2004, the Union of Concerned Scientists put out a document charging this administration with “distortion of scientific knowledge for partisan political ends.” By the end of the Bush administration, this document had been signed by over 15,000 scientists, including 52 Nobel Laureates and 63 recipients of the National Medal of Science.

Moreover, a scientist who formerly worked for NIST has reported that it has been “fully hijacked from the scientific into the political realm,” with the result that scientists work ng for NIST “lost [their] scientific independence, and became little more than ‘hired guns.'” Referring in particular to NIST's work on the World Trade Center, he said everything had to be approved by the Department of Commerce, the National Security Agency, and the Office of Management and Budget–“an arm of the Executive Office of the President,” which “had a policy person specifically delegated to provide oversight on [NIST's] work.”

1 For the full list of WTC 7 tenants, see: http://wtc7.net/background.html