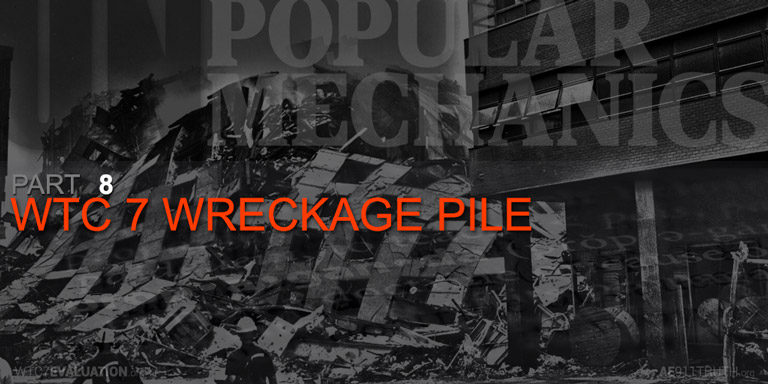 Popular Mechanics' (PM's) next section discusses the actual collapse of World Trade Center 7 (WTC 7) and the condition of the wreckage pile after it collapsed. It creates the impression that both of these issues can be explained by natural means rather than demolition. As we shall see, this is simply not the case, as with virtually all of PM's arguments against demolition.

“Blanchard says that ‘conspiracy theorists' have misappropriated his example of felling a tree for multiple reasons. WTC 7 was 330 feet long at its maximum, and 140 feet wide. Unlike tipping a tree a few feet in diameter, tipping WTC 7 would have required deflecting the building more than 70 feet north or south before its center of gravity moved beyond its base — an incomprehensible margin, particularly because WTC seven sustained no external lateral forces. . . .

Secondly Blanchard estimates the interior of WTC seven some 80 to 90 percentage air. . . . Once thousands of tons of steel beams and concrete flooring began to collapse, Blanchard says, the structure had too much inertia to go any other direction. “Trees are inherently rigid monolithic structures,” Blanchard states. “A radio tower could be felled like a tree. You could begin a building's descent in a certain direction by cutting certain columns, but you cannot fell a building like a tree” (pg. 74-75).

After more than two seconds of free-fall acceleration, in which the building fell straight down for 100 feet (the key point presented by AE911Truth, which remains completely unaddressed by Blanchard), the upper part of WTC 7 may have had enough inertia to destroy the lower part of the building, but this free fall must be explained by Blanchard — without the use of explosives.

The two arguments that are presented are “red herrings”: a) there were no lateral forces to knock WTC 7 over and b) the building was mostly air by volume. Both of these arguments are problematic. 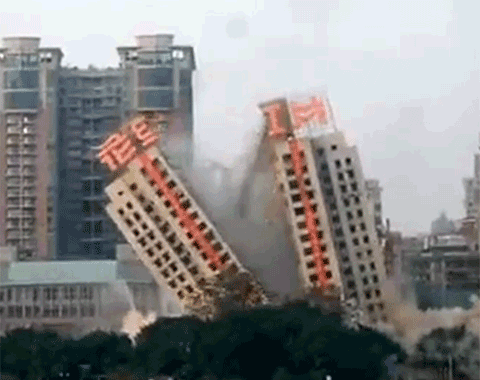 Compare these failed controlled demolitions to the complete destruction of WTC 7 on 9/11: WTC Building 7 “Collapse” video compilation. According to the NIST WTC 7 report, the demolition crews should have just set these buildings on fire if they wanted to completely demolish them.

If buildings that are [mostly] air — virtually all modern office buildings — can only collapse straight down, one has to wonder why demolition companies are paid millions of dollars to engineer straight down collapses with hundreds of carefully placed and precision-timed explosives.2

Clearly Blanchard's arguments fall well short of providing reasonable explanations for why Tower 7 collapsed the way it did. However, in order to further promote their case that there was nothing unusual about WTC 7's collapse, PM notes that the rubble pile was not exactly “neat,” since nearby structures such as the Fiterman Hall and the Verizon Building were structurally damaged by debris from WTC 7. While it is true there was damage to surrounding structures, this may have simply been due to the fact that WTC 7 was a particularly large structure. No building the size of WTC 7 had ever been demolished before, and the structures next to the building were very close. 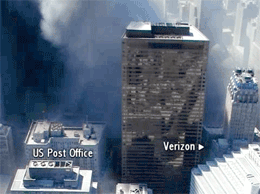 In fact the FEMA report had this to say about WTC 7's debris pile:

“The collapse of WTC 7 had a small debris field as the facade was pulled downward, suggesting an internal failure and implosion. . . . The average debris field radius was approximately 70 feet.”3 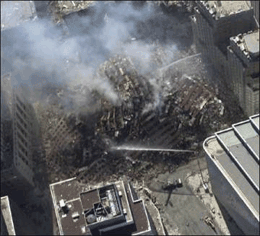 Just like in acknowledged controlled demolitions, most of the remains of WTC 7 landed inside the building's footprint.PM continues to criticize the 9/11 Truth movement's analyses of WTC 7's collapse by claiming that “conspiracy theorists count seconds on grainy news footage” (pg. 75), thereby misrepresenting the actual collapse time of the building. The chapter notes how NIST precisely measured the descent of the building using pixel analysis, and then explains NIST's findings:

NIST charted the building's collapse as it fell 18 stories, until the roofline disappeared behind neighboring high-rises. The agency separated the visible collapsed time into three distinct sections: Stage 1, which lasted 1.75 seconds, corresponds to the initial buckling of the outside columns and the start of the north face's descent. In Stage 2, lasting 2.25 seconds, the building's shell fell 8 stories, or 105 feet, in a “free fall drop.” NIST agrees that the exterior fell at gravitational acceleration during this stage, noting that “the columns provided negligible support to the upper portion of the north face.” In Stage 3, the upper section of the building encountered resistance from the debris pile below, and it took 1.4 seconds for the northwest corner to fall 130 feet and vanish from view. “The collapse time was approximately 40 percent longer than that of free-fall for the first 18 stories of descent, the report concluded. The detailed analysis shows that this increasing time is due primarily to stage one in which column buckling is just beginning and gradual increases in displacement and velocity were observed” (pg. 76-77).

Here we have PM finally acknowledging (after its initial public denial) that WTC 7 did fall at free fall for at least a portion of its collapse. However, the writers simply dismiss this fact without any analysis. They also fail to mention that a member of the 9/11 Truth movement, physicist David Chandler, had publically embarrassed NIST into this admission in the first place with a very precise analysis.4

Both PM and NIST claim that the buckling of the lower floors is what caused the 2.25-second period of free fall. However, this does not at all explain this anomaly of the building's collapse, as noted by mechanical engineer Tony Szamboti, who gives several reasons why neither the Twin Towers nor WTC 7 could have collapsed at the rate that they did without explosives:

The minimum resistance during buckling is a function of the plastic moment and the unsupported length of the column. In a one-story unsupported length of the Twin Tower box columns, it was approximately 25% of the yield strength of the column. For the wide-flange columns in the core it was lower, at about 14% of yield. The wide-flange core columns at the 98th floor of the North Tower had a minimum factor of safety against gravity of 3 and the perimeter box columns a minimum factor of safety against gravity of 5. The core columns would have to buckle over one story with their moment connected beams at each floor, so they would provide a minimum resistance during buckling of about 42% of their load. A case could be made that the perimeter columns initially buckled over two stories and thus their resistance would be 12.5% of yield, so they would have still provided a resistance of 65% of their load. The load split between the core and perimeter was 42% core and 58% perimeter. The resistance during buckling would thus be (0.42)(0.42) + (0.58)(0.65) = 0.55. So the resistance to the actual load during buckling would have been a minimum of about 0.55g. . . . Additionally, WTC 7 could not come down in freefall while its columns were buckling for the reasons I showed above, and it didn't start to tilt over until it was about 60% of the way down and well beyond that initial 8-story (100-foot) freefall.5

Thus, since the columns could not possibly have lost all of their strength from buckling, it is impossible that WTC 7 could have collapsed in a natural way in free fall at any time during the collapse. This clearly implies that some sort of external force was used to remove the column strength, which could only have been explosives, in a comprehensively placed and synchronistically timed controlled demolition.

To finish up this section of their book, PM claims that WTC 7 could not have been destroyed with explosives for two reasons: 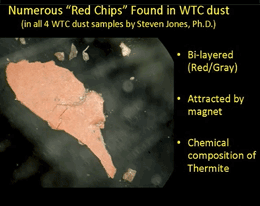 Move the video time slider forward to 21:09 minutes to watch the discussion of evidence for thermite.Both of these arguments are seriously flawed. In regard to the first point, NIST's simulations only cite RDX as the likely explosive that was used in the building. However, as many of the most prominent 9/11 researchers have pointed out, thermite was the most likely material used in the building, given that there was evidence for thermite found in the rubble pile (several tons of molten iron and melted steel beams that fire can't account for) and in the WTC dust (several tons of small iron spheres that jet fuel and fires can't account for). Also, thermite is not an explosive but a much quieter incendiary, so the cutting is done with heat rather than expanding gases. It means that fewer explosives would have to be used to bring the buildings down, making it a much quieter operation that is ideal for a covert demolition. However, as we previously saw, both PM and NIST dismissed the idea of thermite being used simply because they felt it would have been too difficult to secretly place enough thermite in the building. This is a thoroughly unscientific argument, and NIST's dismissal of thermite purely based on this argument is groundless. A real investigation would reveal that operatives could have had access to the core columns through the elevator shafts under the guise of elevator repairs in the months prior to 9/11 for instance — and access to perimeter columns via planned tenant vacancies — both of which are quite well documented in the Twin Towers.

[E]ven if NIST's argument were true, it would prove nothing. NIST's assumption that explosives would have been focused especially on Column 79 is based solely on its own argument. . . that this was the critical column, the failure of which would have caused the entire building to collapse. Prior to NIST's report, the notion that anyone planning to bring down WTC 7 would have concentrated the explosive material on this particular column had apparently not occurred to anyone. Accordingly, even if NIST's argument here is correct — that the windows that would have been broken if NIST's scenario had been enacted were not broken — it is a circular argument, based solely on NIST's own scenario, not that of people who claimed that WTC 7 was brought down with explosives. It is thereby a strawman argument, disproving an unlikely hypothesis of its own creation that diverts attention from the more likely hypothesis proffered by critics of the official account. NIST's argument does not, therefore, do anything to undermine the contention that the building was deliberately demolished.6

As such, window breakage did occur in WTC 7, suggesting that explosives of some type were used. As Griffin also notes:

[M]ore than one witness described windows as breaking at the time the building started to come down. Peter Demarco of the New York Daily News said: “The building's top row of windows popped out. Then all the windows on the thirty-ninth floor popped out. Then the thirty-eighth floor. Pop! Pop! Pop!” A New York University medical student said that “it looked like there was a shockwave ripping through the building and the windows all busted out. NIST's argument about window breakage is clearly bogus.7

As for PM's second argument, it fails for the same reason cited above, which is that NIST only posits explosives such as RDX being used (instead of thermite). Moreover, PM and NIST's entire reasoning goes against standard investigation practices, since the sound of an explosion is not the defining factor in determining whether or not explosives were used, as noted by the NFPA 921 Guide for Fire and Explosive Investigations:

Although an explosion is almost always accompanied by the production of a loud noise, the noise itself is not an essential element in the definition of an explosion. The generation and violent escape of gases are the primary criteria of an explosion .8

PM's appeal to NIST was evidently a major error on PM's part, as NIST utterly fails to show that WTC 7 could not have been brought down through controlled demolition.

1 See: “How WTC 7 might have fallen IF it were fatally damaged by fire - AE911Truth.org”

8 Quoted from: “WHY DOES NIST REFUSE TO TEST FOR EXPLOSIVES?” by Firefighters for 9-11 Truth