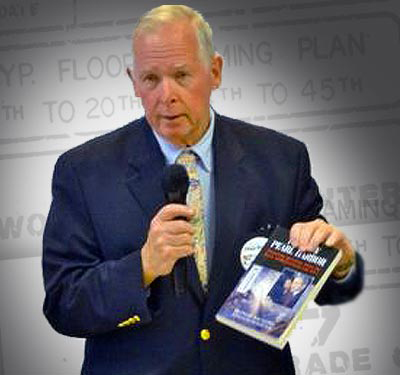 Stan Beattie holds up David Ray Griffin's book, The New Pearl Harbor, for his audience to see at a recent 9/11 Truth presentation tan also supports Firefighters for 9/11 Truth. In fact, he has visited fire stations in Farmington Hills, near Detroit, and in Brooklyn, New York, and talked with the firefighters about 9/11. One of the people who came up to thank him after his presentation in Brighton, Michigan, said that his son had been to a firefighters' gathering, where the general feeling was that "controlled demolitions brought the buildings down."

It's likely that no one has given more presentations on this subject than Stan other than AE911Truth founder Richard Gage, AIA, according to Daniel Noel, AE911Truth's Presenter Team leader. Noel is especially impressed with how many ways Stan finds to get the word out both in his own community (where he calls upon his broad range of contacts in the non-profit world, leaflets in various neighborhoods, and reaches out to people he doesn't know) and beyond his community. "Stan travels far away from home just to present AE911Truth to the public, and he systematically looks for presentation opportunities wherever he goes," recounts Noel.

Between when he joined the Presenter Team in 2010 and the end of 2012, Stan gave 12 presentations about 9/11 Truth. In the 18 months since then, he's made another 15 presentations in Michigan, Florida, and Washington, D.C. The wide variety of groups he has spoken to include Rotary Clubs, the Destroyer Escort Sailors Association, Mid-Michigan Atheists and Humanists, the Southeast Michigan Mensa organization, Grey Panthers, and Ann Arbor Science and Skeptics. Most recently, he was invited to give a presentation on July 25 at the Veterans for Peace Convention, which was held at the University of North Carolina in Asheville.

One time Stan presented the evidence to a group of 16 at a friend's home. Later his friend called and told him that several people who attended the gathering said they'd had trouble sleeping that night and wished there had been a follow-up meeting to discuss the 9/11 events.

Sometimes Stan isn't the presenter but organizes presentations for others. For example, in 2011 he secured a venue for Richard Gage to speak at Lawrence Technological University in Detroit. At the event was a Fox News reporter, who invited Richard to the studio to be interviewed on that night's 10 PM local news broadcast.

Stan's reward for all this volunteer work is simply the "satisfaction I get from fulfilling a mission," as he puts it. "I'm motivated by a quest for justice."

If you would like to help introduce the truth of 9/11 to fellow Americans — or citizens of any country — consider joining the AE911Truth Presenter Team. Simply fill out a volunteer form. Just think: You will have the opportunity of showing the evidence to people who have never been exposed to it before. This could well advance the cause of securing a real investigation. Stan Beattie, for one, is sure you won't have any regrets.