By Josef Hanji and Ted Walter

A watershed moment took place in Denmark on April 3, 2009. It was from this Scandinavian country that an international team of scientists announced the publication of an article in the Bentham Open Chemical and Physics Journal detailing the findings of their 18-month study on dust samples recovered from the World Trade Center after September 11, 2001.

Based on their discovery of red-gray chips found in the WTC dust and the properties of those chips, the group concluded that a high-tech nano-thermitic material was present in the dust. The earlier discovery of iron microspheres in the WTC dust, as well as other observations, supported the conclusion that wide-scale thermitic reactions were a primary cause of the World Trade Center’s destruction on 9/11.

The team of scientists was assembled by Dr. Steven Jones, then a physics professor at Brigham Young University. The article's main author was Danish nano-chemist Niels Harrit, at the time a professor of chemistry at the University of Copenhagen. Three days after the article was published, Dr. Harrit appeared on TV2NEWS in Denmark to discuss the team's discovery of nano-thermite in the WTC dust. Speaking for nearly 10 minutes to an intrigued national media news anchor, Harrit burst on to the scene as his country’s most vocal and iconic critic of the official 9/11 narrative.

Denmark, one of the five Nordic nations, is small in geographical size—less than 17,000 square miles—and in population—6.5 million people. It has a long tradition of peace; before the War on Terrorism, it had not attacked another country since 1848. That tradition ended when, as a member of NATO, it joined the alliance that went to war in Afghanistan following the 9/11 attacks. In 2003, Prime Minister Anders Fogh Rasmussen took Denmark to war in Iraq. Six years later, he became NATO's General Secretary, an office he held until September 2014. Denmark also participated in the war against Libya in 2011, and is currently involved in the war against ISIS in Iraq and Syria.

Denmark's active role in the War on Terrorism has given rise to an equally active 9/11 Truth Movement, whose members question the basis for their country's recent military aggression. The Danish 9/11 Truth Movement began organizing in September 2006, after a landmark lecture by Dr. David Ray Griffin at the Royal Library of Denmark. Six months later, Niels Harrit started giving lectures on the forensic evidence found at the World Trade Center. He has since given close to 225 lectures in Denmark and 15 other countries, making him the second most prolific 9/11 presenter after AE911Truth founder Richard Gage, AIA.

Denmark's grassroots activists have also been doing their part: Since 2008, members of the Copenhagen group have passed out more than 100,000 flyers and 10,000 DVDs at some 50 "street actions."

On March 12, 2015, Denmark will write another piece of 9/11 Truth history. On that day, a two-year dispute between Harrit and the Danish newspaper Weekendavisen is due to come to judgment in the Danish High Court.

The dispute began with the newspaper's December 2012 article, "Madness in the Library," which criticized the director of the Royal Library of Denmark for offering to host an exhibit featuring the Turkish government's take on the Armenian genocide. His offer was intended to balance the library's then-ongoing exhibit about the genocide, which had been organized with the help of the Armenian Embassy in Denmark.

In the article, journalist Søren K. Villemoes referred to Niels Harrit and his 9/11 Truth colleagues as "crackpots" and facetiously wondered out loud if they, too, should be invited to present their views at the Royal Library — the very venue where, ironically, Dr. Griffin had lectured six years earlier. Villemoes went on to group Harrit and other members of the 9/11 Truth Movement with creationists and Holocaust deniers.

As a scientist who had taught for 40 years at the University of Copenhagen, Dr. Harrit was appalled at being labeled a "crackpot" and likened to creationists and Holocaust deniers. So he filed a libel suit against Villemoes and the editor of Weekendavisen, Anne Knudsen. On August 16, 2013, the two parties appeared in City Court in Copenhagen. 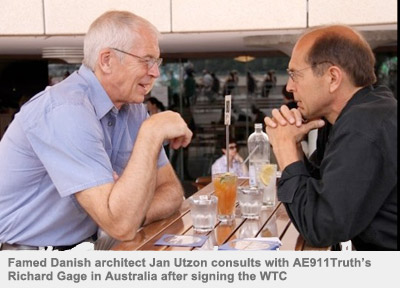 Representing himself in court, Harrit showed that Villemoes had minimal knowledge of the nano-thermite discovery and no factual basis for calling the chemist a "crackpot." Under Danish law, if Villemoes' reporting failed to meet the standards of good journalism and he could not demonstrate a factual basis for his claims, he would be guilty of libel. World-renowned Danish architect Jan Utzon was called as a witness. He spoke on behalf of the 1,975 architects and engineers at that time — of which he was one — who had signed the AE911Truth petition calling for a new investigation of 9/11, now over 2,300 signatories and growing.

However, the judge ruled that Weekendavisen acted within the limits of free speech, ignoring the fact that Villemoes did not meet the standards of "good journalism" and could not demonstrate a factual basis for his claims. Harrit appealed the ruling.

When he appears in front of three High Court judges on March 12, Harrit will bring with him evidence that will be difficult to defeat. 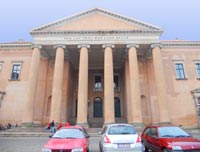 First, he will play for the judges a video of WTC 7’s destruction, which he will use to demonstrate the reasonableness of the controlled demolition theory. He will also submit a bag of WTC dust, the studies of which he will use to destroy the false accusation made by Villemoes in City Court that the collected dust samples were inauthentic.

As for witnesses, architect Jan Utzon will again speak on behalf of AE911Truth. In addition, Harrit will call upon colleague Per Hedegård, a professor of physics at the University of Copenhagen's Niels Bohr Institute. In City Court in 2013, Villemoes' lawyer had used a statement from Per Hedegård dismissive of Harrit as a way to substantiate the claim that Harrit was a crackpot. However, since Per Hedegård now supports Dr. Harrit's view that the official explanation for the collapse of the three WTC buildings is in violation of Newton's laws of physics, he has insisted on appearing in court to testify on Dr. Harrit's behalf.

Once again, Harrit will be representing himself in court, though this time he will have the assistance of legal counsel from Danish attorney Mads Krøger Pramming, who is chairman of the Danish whistleblower organization Veron.

You can help Niels Harrit

You can do your part to help Niels Harrit win his case by making a donation to a fund that will pay for his legal counsel.

Here's why your contribution is important: If he wins the case, it will be a major blow to the Danish mainstream media, which, ever since the City Court case in 2013, has been portraying Harrit as a lone crackpot. In all of the media coverage surrounding the first trial, only one article in the mainstream press has mentioned the presence of renowned architect Jan Utzon as an expert witness who shares Harrit's view. Moreover, there has been a total blackout on coverage of AE911Truth: Not a single member of the Danish media has asked to interview its American founder, Richard Gage.

Thus, your donation will show Denmark — and the world — that Niels Harrit doesn't stand alone. It will force the country's mainstream media to end its silence about the thousands of technical professionals who share Harrit's view of the WTC destruction.