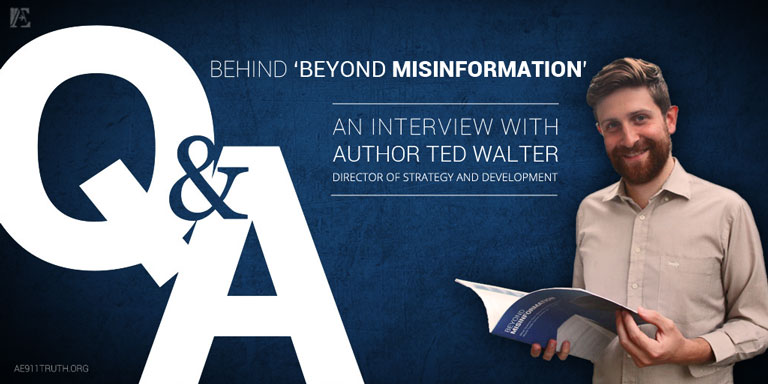 Beyond Misinformation: What Science Says About the Destruction of World Trade Center Buildings 1, 2, and 7 is AE911Truth's new, comprehensive guide to the WTC evidence. Since publishing it on September 8, 2015, AE911Truth has distributed more than 40,000 copies. Two weeks after the booklet's release date, we sat down with its author, Ted Walter, to get the full story on the creation of this document and what it means for AE911Truth.

AE: Where did you get this idea?

TW: In the past year or two, several of us at AE911Truth have felt, at different points, that we needed a written document that would tell the entire story of the destruction of the three World Trade Center buildings. Over the years we've produced several videos that have been very popular. We've also written a number of articles addressing specific areas of the evidence.
But we realized we didn't have one single document that comprehensively summarized all of the main evidence related to the WTC's destruction. We believed that a document like this could be useful in several ways, from doing mailings to architecture and engineering professionals, to being a key educational resource for people who visit our website for the first time. Being less expensive to produce than a book, we also thought a booklet could be an effective outreach tool that our supporters would buy in bulk and distribute on their own. 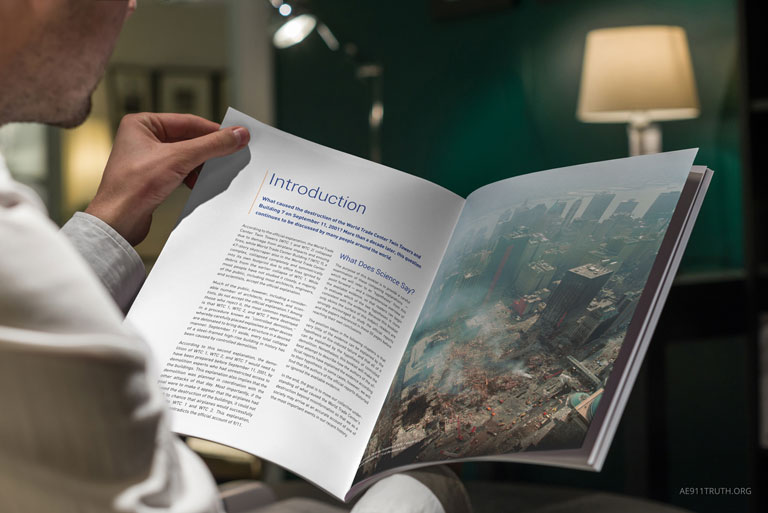 AE: When did AE911Truth decide to actually implement the idea?

TW: As we discussed various ways of creating one document, we had different formats in mind at different times. Finally, our plan for a booklet crystallized this past May. It dovetailed with our trip to the national convention of the American Institute of Architects and our desire to do further outreach to the architecture community. And we knew that if we worked efficiently, we would be able to publish it around the fourteenth anniversary of 9/11.
By the end of May, we had set the project into motion — first outlining the points the booklet needed to convey, then thinking about it from a design standpoint, then determining the specific content it should cover. We also began devising the mailing campaign, which involved deciding who we should mail the booklet to and researching how much it would cost to print and mail it to thousands of architects and engineers all over the United States.

AE: Why did you think this stand-alone document would be important to AE911Truth's mission?

TW: Our job, as I see it, is to make it as easy as possible for people who are new to this information to find it and consume it. These newcomers may be architects and engineers or other building professionals or scientists — or they may be everyday people. Whatever their field or level of expertise, we want them to be able to survey the entire landscape of scholarly research and scientific evidence by reading one source instead of having to search all over the Internet for different papers and not know which papers out there are more valid than others. We knew if we could distil the information into one document and ensure that it was accurate, we would be making it much easier for people to familiarize themselves with the evidence.

AE: Why do you believe the architecture and engineering communities, as well as federal and state officials, must be reached with this evidence?

TW: As we all know, 9/11 paved the way for our country's current national security policy. Immense public resources have been expended in a series of wars and in a multitude of national security measures at home and abroad. The events of that day provided the US government with a pretext for a permanent war on terrorism — a war that continues to be the paradigm for our national security policy and that will continue for decades unless we change our understanding of what happened that day.
The evidence presented in this booklet directly contradicts the very foundation of that ongoing national security policy. So it's hugely important that people look at it. In particular, our mission is to get it in front of thought leaders who can help this idea gain traction, as well as in front of policymakers who have a responsibility to make sound, rational public policy.

AE: What was the first step you took to implement the project?

TW: The first step was to establish a goal — that is, what we wanted to accomplish with the booklet. We determined that we wanted it to be an overview of the WTC evidence and an exploration of how proponents of two opposing hypotheses — controlled demolition and fire-induced failure — have interpreted that evidence. We felt the most scientifically responsible way of approaching it was to say to readers, in effect: "This is the evidence and this is how proponents of each hypothesis have attempted to account for it according to their hypothesis." From there, we evaluate which hypothesis better explains the evidence.
At the same time, we were also coming up with the title. We knew we wanted it to be unique — distinguishable from any other titles we had already used. And we wanted it to be succinct and bold.
One thing that prompted the title we eventually settled on — Beyond Misinformation — is what we encountered when we attended the AIA convention I mentioned earlier. At the convention, we had submitted a resolution calling for the AIA to support a new WTC 7 investigation. And we were astonished to hear opponents of the resolution argue in favor of the official reports, while being completely mistaken about what those official reports actually said. We realized that if the people who govern this national association of architects didn't even know the official explanation for the total collapse of a 47-story skyscraper, then there was truly a lot of misinformation out there — and it had to be corrected.
So, ever since the convention, one of our major goals with the booklet has been to educate readers about what the official hypothesis of fire-induced failure actually says, so we can accurately compare and contrast it with the controlled demolition hypothesis.
The subtitle we chose — What Science Says About the Destruction of World Trade Center Buildings 1, 2, and 7 — conveys the approach we wanted to take, which was to hew to the scientific method of investigation and trust science to tell us which of the two hypotheses is the most viable for explaining the destruction of these buildings.
We felt very strongly that if we simply presented the evidence and then described how that evidence has been interpreted by either side, it would be obvious that one side was examining the evidence scientifically and objectively — and the other side was not.

AE: How many people were involved in the project?

TW: Though I was the booklet's "architect," you might say, and the main author, it would never have come together were it not for our team of contributing writers — Craig McKee, Andy Steele, and Chris Sarns (Chris was also our technical editor) — and our review committee, which had three architects, three engineers, and the renowned 9/11 researcher Graeme MacQueen. The writers and I were tasked with generating the content, while it was the job of our technical editor and the review committee to ensure the booklet told the story effectively and that it had no factual inaccuracies. Besides our writers and reviewers, we had a professional editor/proofreader, who must have read every page at least five times, and a fantastic graphic designer. So, to answer your question, there were 13 of us in all.

AE: How long did the entire process take, from getting the organization’s approval for the idea to printing the first round of 40,000 booklets?

TW: From developing content and designing the layout to the last proofing, it took two-and-a-half months, starting in early June and ending in mid-August. The print shop did its part in the last two weeks of August, and the mailing began in early September.

AE: What were some of the challenges you encountered along the way?

TW: Well, the biggest challenge we faced was the minor differences we had in terms of the relevance of various facts. It's natural that once all the information is put on paper, you're going to run into issues, such as which set of facts are the most important ones to convey to readers, especially with limited space. We wanted to give people only the most significant facts, as well as the correct interpretation of them. In every case, we resolved the issues. As a result, the booklet gives, as far as we can tell, the most accurate and valid analysis possible.
If anyone has questions about certain facts or can't remember certain facts or doesn't know the significance of certain facts, chances are they will find whatever answers they're looking for in this booklet. And we can vouch that the information is correct, because it has been vetted by building experts and by highly accomplished 9/11 researchers.

AE: What impression do you hope the booklet leaves with readers?

TW: We hope that readers come away with the clear understanding that the official investigations either ignored, denied, or distorted every area of the relevant evidence — and that there is simply no evidence to support the hypothesis of fire-induced failure. At the same time, we hope that readers who perhaps hadn't given a fair shake to the controlled demolition hypothesis will be stunned to see that it readily accounts for all of the evidence, while the hypothesis of fire-induced failure depends completely on avoiding the evidence.

AE: What do you hope this booklet will accomplish?

TW: In the short term, we hope a large percentage of the 20,000 architects and engineers who receive our mailing will read all 50 pages with an open mind and will sign our petition. On top of that, we've mailed another 20,000 copies to supporters who will generally be sharing the booklet with their friends, family, coworkers, neighbors — anyone who is receptive. We hope all that exposure early on will help increase our number of supporters, and cement the place of this booklet as an effective educational tool.
In the long run, our goal is to have Beyond Misinformation — both the print version and the e-version — reach a brand-new audience and thus be read by hundreds of thousands and eventually millions of people. Like many books and videos about 9/11 — including the materials AE911Truth has put out — this booklet can play a vital role in educating countless numbers of people worldwide and inspiring them to support a new investigation of the World Trade Center's destruction.
Putting on my director of strategy and development hat for a minute, may I add that the e-version and print version can be purchased at BeyondMisinformation.org. 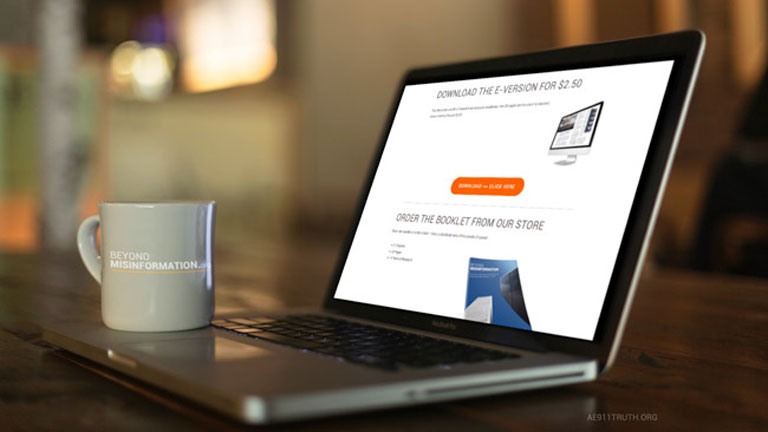