Pitching it as "an opportunity to shake things up in our city," architect Henry MacLean and 9/11 activist Chris Gruener convinced Architects & Engineers for 9/11 Truth to attend Architecture Boston Expo (ABX) last month. As an incentive, they raised the first $900 of the $2,700 booth space fee. From there, we were off to the races.

Chemical engineer Rich McCampbell, P.E., and architect Michael Blutt, AIA, and their crew quickly followed up with logistics. They amassed a total of 36 volunteers who were willing to serve at the AE911Truth booth in various time slots over a three-day period. Their goal was to educate as many architects and engineers as they could among the thousands who visited the exhibit hall of the largest building industry trade show in the Northeast, held November 17-19. The annual event is attended by 10,000-plus architects, engineers, builders, and other design professionals. 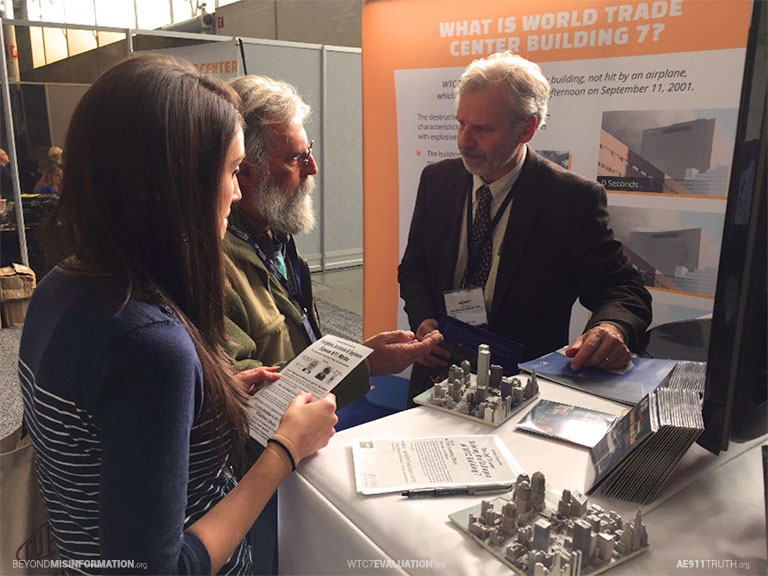 Henry MacLean, AIA, answers the deeper questions raised by two fellow AIA members who wanted to understand why they didn’t know about the third worst structural failure in modern history. Note the incredibly detailed 3D printed models of the WTC site, which were created by ABX volunteer David Munson

More than 1,000 of the attendees stopped at our booth, which was without a doubt the busiest booth among the hundreds of vendors exhibiting at the event.

We repurposed much of the display system from our booth at the American Institute of Architects annual convention in Atlanta last May. There, we had devoted ourselves to the mission of highlighting the collapse of World Trade Center Building 7 (WTC 7).

It was in Atlanta, in fact, that we had discovered the secret to getting a large percentage of the name-tag-wearing passersby to stop and listen to our message. We applied the same method at the ABX:

"Hi John," we addressed by name whoever strolled by our booth, "did you know that a third tower fell on 9/11?"

"No!" the startled architect would usually respond, stopping in his tracks. No matter what the answer, though, we would invite our visitor to "Take a look at it!" as we pointed to the video of WTC 7 on our large monitors. "What do you think is bringing down that tower? Fires? Or controlled demolition?"

"It looks like a controlled demolition," was the reply we heard hundreds of times.

"Yes!" we'd exclaim, validating their answer. "And more than 2,000 architects and engineers agree with you!"

We then elaborated by explaining that, a full seven years after the destruction of WTC 7 on September 11, 2001, the federal government's National Institute of Standards and Technology (NIST) had finally issued a report on the 47-story structure's collapse, which it blamed on "normal office fires."

Next we provided more Building 7 facts: "In the 100-year history of much larger, hotter, and longer-lasting office fires, not one has ever brought down a skyscraper! And the evidence [which we walked them through to a greater or lesser extent, depending on their patience level] overwhelmingly shows proof of controlled demolition."

We always encouraged our guests to sign the AE911Truth petition. "Will you join more than 2,400 architects and engineers who are calling for an independent investigation of the Building 7's destruction?"

Most of the by-now-intrigued architects told us they first wanted to study our materials — our tri-fold brochure, our 15-minute WTC 7 DVD, or our 90-minute Experts Speak Out DVD, which we offered, depending on their level of open-mindedness — before they committed to signing their name. Using this tried-and-true script, we obtained 110 new signatories at the ABX. Fully half of them were AIA members who agreed to simultaneously co-sponsor a resolution that we will present at the American Institute of Architects annual convention in Philadelphia next May. If the resolution passes, it will require the national AIA to call for a new investigation of the destruction of WTC 7.

When we asked our brand-new signatories why they had just signed our petition, their responses ranged from "We've got to get to the bottom of this" to "Something smells fishy about the official report" to "The AIA never looked closely at this building failure" to "It's obviously a controlled demolition, so why did they lie about it?" 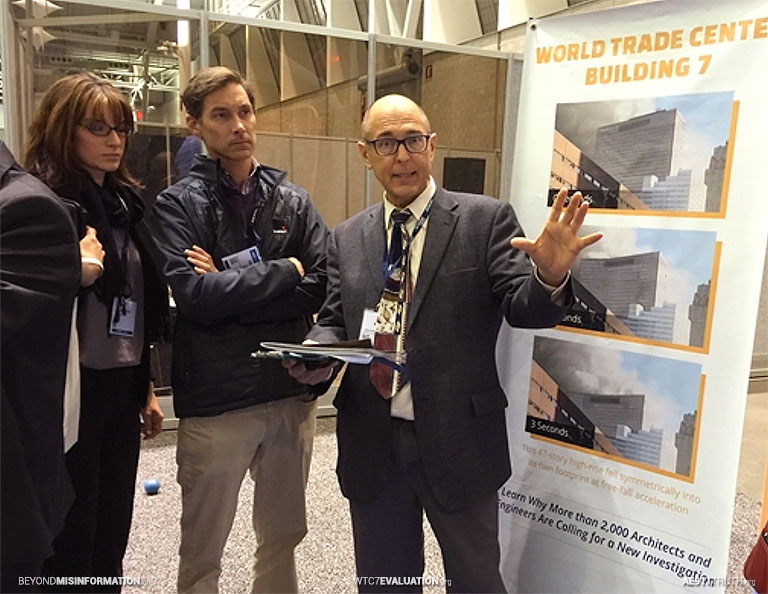 Richard Gage, AIA, founder of AE911Truth, answered tough questions from two fellow AIA members who dared ask, “What are you trying to accomplish here?” His reply: “Very few architects and engineers are familiar with the third largest structural failure in modern history. AE911Truth is simply trying to educate the profession with the facts — namely, that no plane hit WTC 7; that its sudden seven-second symmetrical free-fall by ‘normal office fires’ should have been the most studied structural failure in history; and that NIST did not include most of the evidence pointing to explosives in its final report.” He added that "architects everywhere should be demanding a real investigation that gets to the real cause of this building’s failure."

The Boston Society of Architects, which hosted the convention, had also invited AE911Truth to speak at the ABX Learning Stage. Our 40-minute presentation there gave us the unprecedented opportunity to offer continuing education credits to the architects who attended. 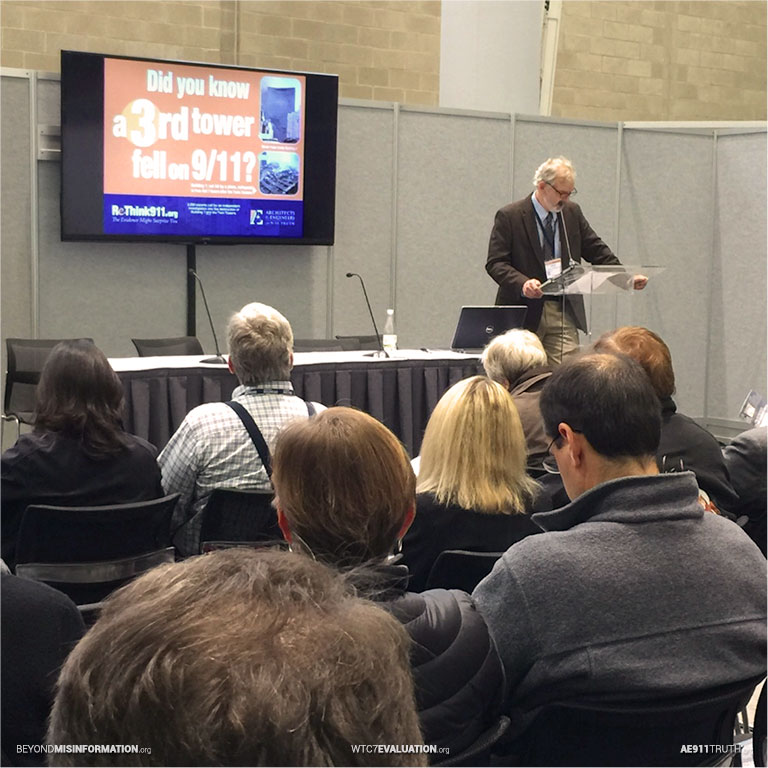 Henry MacLean's introduction put the WTC 7 issue in context for the 66 attending architects. 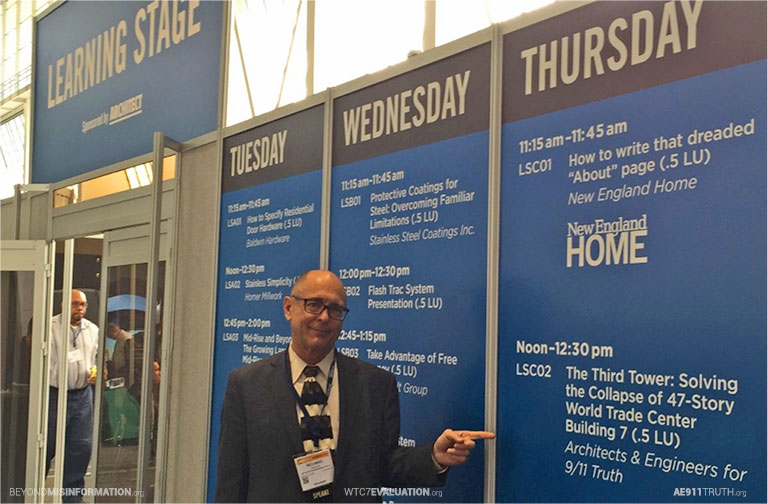 Gage is hopeful that AE911Truth will be able to leapfrog from this Boston Society of Architects-sponsored ABX Learning Stage experience and present the educational evidence of WTC 7's collapse at future AIA conventions.

On the ABX's Learning Stage, Gage presented the 30-minute version of 9/11: Blueprint for Truth, which highlights the essential information contained in the Ed Asner-narrated DVD, Solving the Mystery of WTC 7, seen by more than 1 million people. 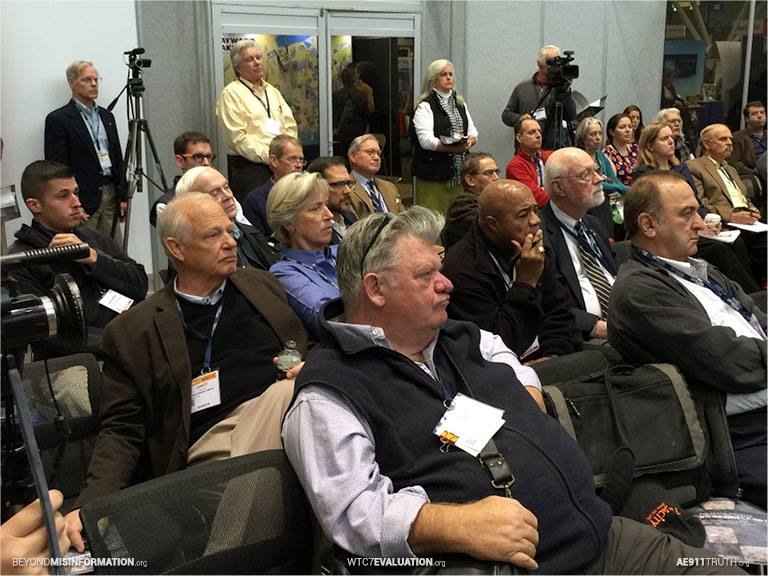 Gage's talk was filmed by a number of videographers, including the host, the Boston Society of Architects, which has been made available online by videographer  John Abrahamson for those who missed the rare opportunity to see an officially sanctioned presentation of the WTC 7 evidence.

The opportunity to attend the Boston convention spurred us to form an AE911Truth Northeast Tour on the same trip. At each stop, we screened our latest film, Firefighters, Architects & Engineers: Expose 9/11 Myths. The only place we didn't show the film was the New Jersey Institute of Technology, where, instead, mechanical engineer Tony Szamboti and architect Richard Gage spoke to engineering students and faculty about the WTC 7 destruction.

Before we left Boston to conclude our tour, we had occasion to meet with distinguished MIT professor and vociferous opponent of 9/11 Truth Noam Chomsky. We hope this smart scholar will one day allow himself to see past his world view just enough to open-mindedly review the evidence of controlled demolition that the 9/11 Truth community has peppered him with for many years now.

During our historic visit with Prof. Chomsky, we presented him with more than 70 peer-reviewed papers on the subject of 9/11 in an effort to show him that we have indeed done our work in the academic community. Many of the papers include the explosive evidence of the destruction of the three WTC skyscrapers. 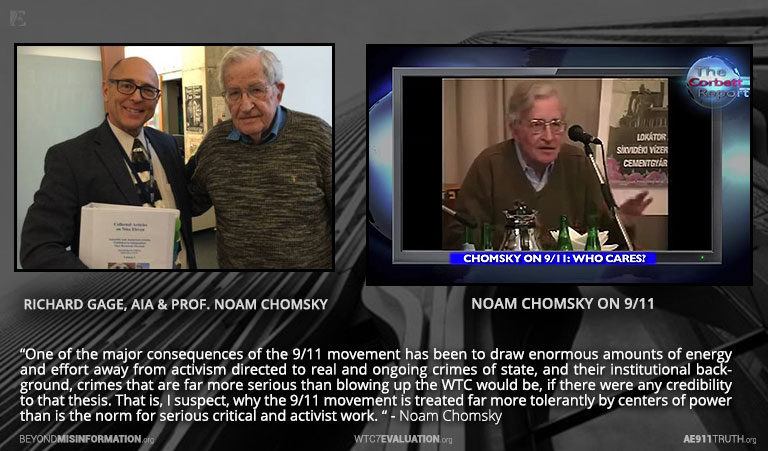 Though from opposite sides of the 9/11 fence, Richard Gage and Noam Chomsky finally met in person. AE911Truth maintains that Chomsky cannot form a cogent opinion of the WTC evidence as long as he refuses to review it.

Never let it be said that the energetic, determined Boston 9/11 Truth group lets go to waste a single opportunity to wake up the public. When Gage was in town, the local organization hosted yet another successful event: the showing of the latest film in AE911Truth's arsenal of myth-busting DVDs, the aforementioned Firefighters, Architects & Engineers: Expose 9/11 Myths (FAE).

See the Boston911Truth.org write-up that describes what these 75 attendees experienced during and after the presentation of our FAE film. For those who can't get enough of hearing 9/11 Truth facts, it was a soul-satisfying event. 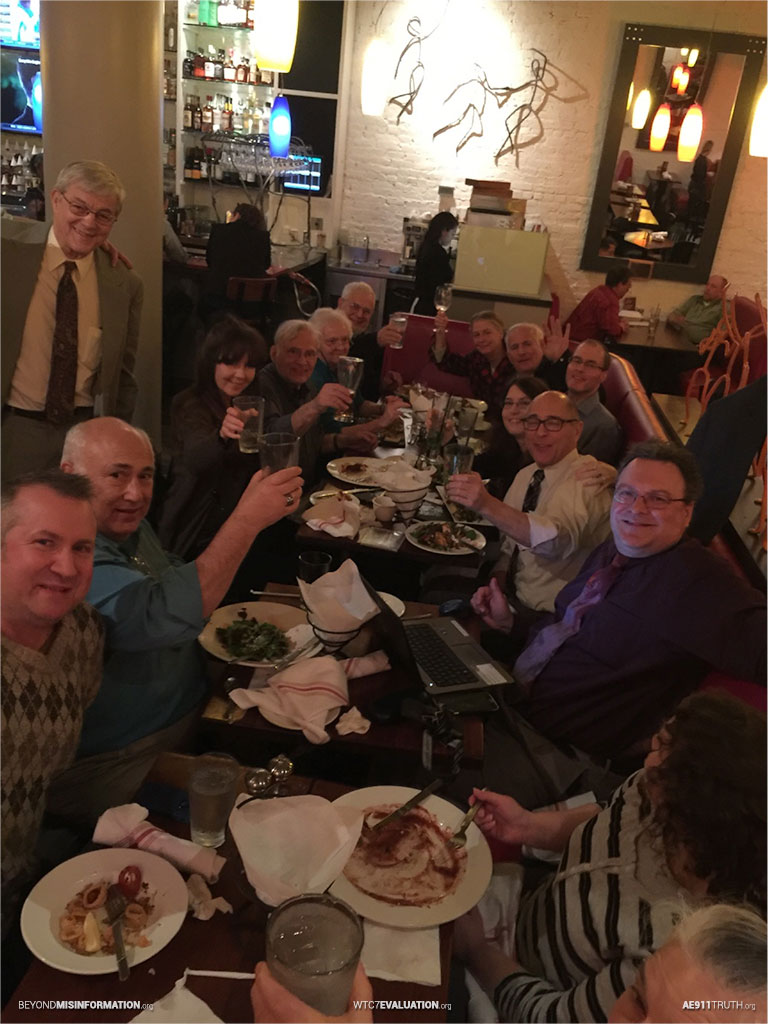 Nobody celebrates like the 36 ABX volunteers, and nobody deserves greater heartfelt thanks for all the hard work they did in coordinating and working the series of events that took place in Boston November 17–19.