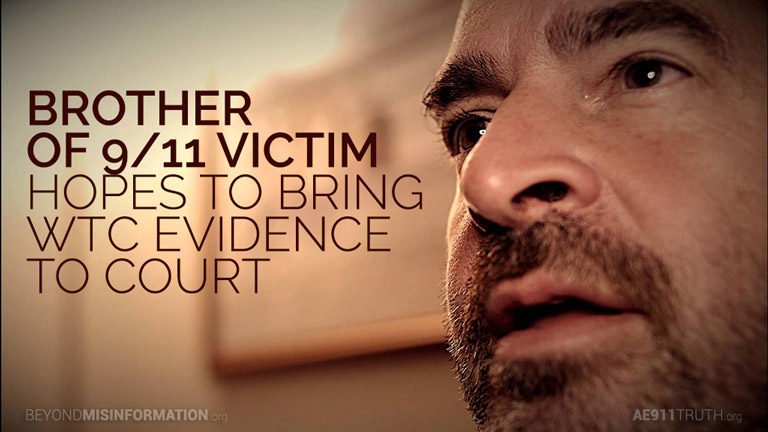 911TruthOutreach and Other Contributors
January 29, 2016

UK citizen Matt Campbell lost his brother, Geoff, in the North Tower of the World Trade Center on September 11, 2001.

In the ensuing years, Matt has been on a quest to find a route to justice for his brother's murder. He has helped expose the fact that the official story is incontrovertibly wrong — that hijacked planes and fires could not possibly be the sole reason for the destruction of the Twin Towers.

Specifically, he has educated government officials and the media by introducing them to the evidence supporting the theory of controlled demolitions. This evidence has been outlined by Architects & Engineers for 9/11 Truth in its documentary, 9/11: Explosive Evidence — Experts Speak Out, and in its booklet, Beyond Misinformation: What Science Says About the Destruction of World Trade Center Buildings 1, 2, and 7. Explosives explain the observed high-speed ejection — outside the footprint of the Twin Towers — of not only structural material, but also the remains of his brother.

Now Matt is pursuing a legal strategy to force a correction to the official story and bring some semblance of justice to his brother. 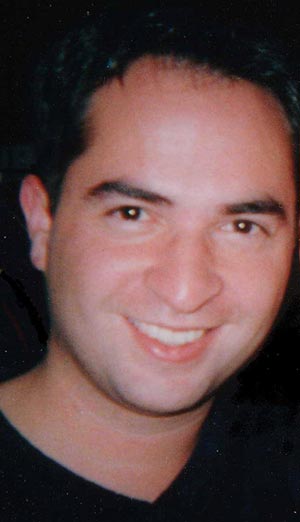 Geoff Cambell Geoff Campbell was on a floor near the top of the 110-story North Tower that morning. His fragmented remains were identified by DNA in 2002, 2004, 2008, and, most recently, in 2013. Matt's tireless efforts on both sides of the Atlantic have gone far to show that the US and UK governments have covered up the evidence of explosives with the cooperation of the media. The only avenue that remains open is legal action through the courts.

On March 23, 2015, Matt went to court in Hastings, UK, for refusing to pay his TV license fees on the basis that the BBC has deliberately covered up incontrovertible evidence relating to how his brother was murdered. (You can read AE911Truth's recent review of Tony Rooke's film Incontrovertible about that very evidence.)

In his court appearance, Matt claimed that because the BBC is concealing the evidence about 9/11, it is supporting terrorism by protecting the true perpetrators. Consequently, his paying a BBC license fee would put him in breach of Section 15 of the 2000 Terrorism Act (UK), which makes it illegal to provide financial support to any organization that supports terrorism. Therefore, by paying his TV license fee he would be committing a serious crime. A summary of that effort was outlined in the March 2015 9/11 Truth Outreach Newsletter.

Matt's brother Geoff appears to have been one of the people who showed up on time for Risk Waters Group's inaugural Waters Financial Technology Congress at the “Windows on the World” on the 106th floor of the North Tower. About 150 people were expected at the event, and conference hosts estimated that 65 of them had actually arrived when American Airlines Flight 11 struck the building about 15 floors below the conference location.

Of the 67 British victims of 9/11, ten were at the conference (eight were staff and two were attendees). Four victims had some of their remains found and identified — including Geoff’s.

“The amount of the remains identified for the victims,” Matt says, “showed that for one victim, most of a body was recovered (about 86%), three victims were identified with a much smaller range of recovered body material (2-3%), and six people had so little remaining body material that the amount of identified remains was rounded to zero percent recovered (0%) and a DNA match was the only way to prove a victim’s identity. This is an interesting range of percentages.”

Matt asks, "What could cause this range of recovered body parts from nearly complete to essentially 'vaporized'? Perhaps it was proximity to explosives?" 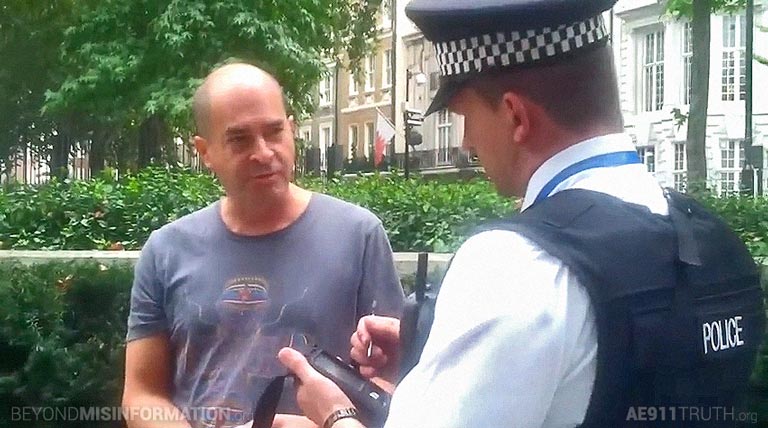 9/11 Commission Report burned at US Embassy in the UK by victim's brother, Matt Cambell, then gets questioned for doing so.

A January 2013 inquest into Geoff's death concluded: “At 8.46 am on 11 September 2001 the deceased was on the 106th floor of the North Tower of World Trade Centre when an aircraft (AA11) was deliberately flown into the building, causing its collapse at 10.28am. This event was part of a coordinated attack by the Islamist militant group Al-Qaeda."

No evidence has been produced to back up any of this narrative's conclusion. The FBI refused to provide authenticated evidence of the alleged hijackers boarding flight American Airlines Flight 11. The National Institute of Standards and Technology was tasked only with investigating up to "collapse initiation" — a limited scope that did not include reconciling its findings with the observations of the actual "collapse" of the towers.

According to Campbell, the inquest relied heavily on the widely discredited 9/11 Commission Report, which should have been considered hearsay from a legal perspective. The testimony before the 9/11 Commission was not testimony taken under oath and therefore never should have been allowed as evidence in an inquest, he believes. This is especially egregious, in his view, because the UK authorities did not perform an independent investigation to substantiate its validity. The inquest did not acknowledge that the alleged involvement of Al-Qaeda was only established under "harsh" interrogation techniques, the records of which were destroyed and never reviewed by members of the 9/11 Commission.

Petition for a Fresh Inquest

After weighing possible next steps, Matt and his colleagues are planning to use the legal process available to them to petition the UK Attorney General to call for a fresh inquest. New evidence that will be used to support this renewed inquest is the announcement that further remains of Geoff were identified in May 2013. These additional remains, coupled with more evidence that has been compiled and documented of the controlled demolition of the Twin Towers, may be enough to bring the issue to a Coroner's court, according to Matt.

He and his team have a meeting with a QC barrister who is interested in taking on the case. (The designation "QC" stands for Queen's Counsel — a particularly eminent, learned jurist appointed as one of Her Majesty's Counsel.) The meeting will assess the merits of the claim and what, if any, further evidence is required.

Matt has initiated a crowd-funding effort to help defray the costs of this new legal route. He is asking for support from those who wish to help to: 1) obtain justice for Geoff, 2) get into court records the scientific evidence for controlled demolition, as documented by AE911Truth, and 3) expose the official narrative of 9/11 for what it is — a lie that, according to Matt, "started the mendacious, meretricious 'war on terror' which has killed thousands of servicemen and women and millions of innocent men, women, and children."

Here are three ways you can help Matt:

— Contribute to his crucial crowd-funding campaign — an initial step toward justice for his brother, Geoff.

This article was co-authored by Matt Campbell, Wayne Coste at https://www.911truthoutreach.org, and others contributors.