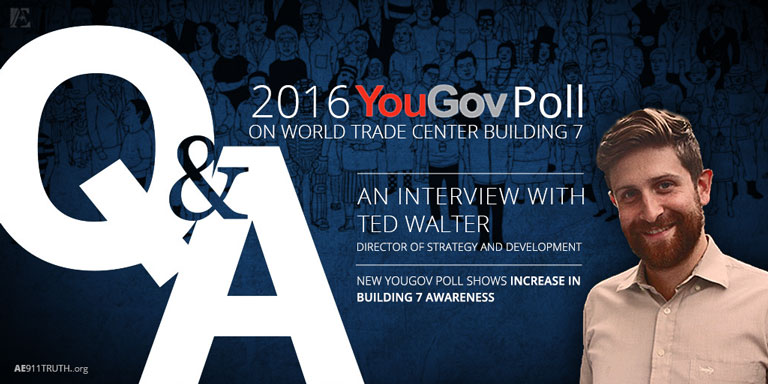 Editor's Note: The following is an interview with AE911Truth's director of strategy, Ted Walter, regarding the YouGov poll AE911Truth recently commissioned in order to gauge public awareness of World Trade Center Building 7 (WTC 7) as well as the public's impression of WTC 7's collapse after viewing footage of it. Similar to previous surveys AE911Truth has commissioned YouGov to perform, more than twice as many respondents in this survey suspected controlled demolition over fires as the cause of WTC 7’s collapse.

Architects & Engineers for 9/11 Truth: AE911Truth recently commissioned a survey by the online polling firm YouGov. Ted, can you talk to us about this survey?

Ted Walter: Sure! First of all, prior to this survey, we had done three other surveys with YouGov. The first was a national US poll in August 2013 during the run-up to our ReThink911 campaign. The second was in Canada during the ReThink911 campaign, which we commissioned because of all the media coverage we were receiving there. The third was in December 2014, also in Canada, after a petition was submitted to the Canadian Parliament asking the government to open its own inquiry into 9/11. 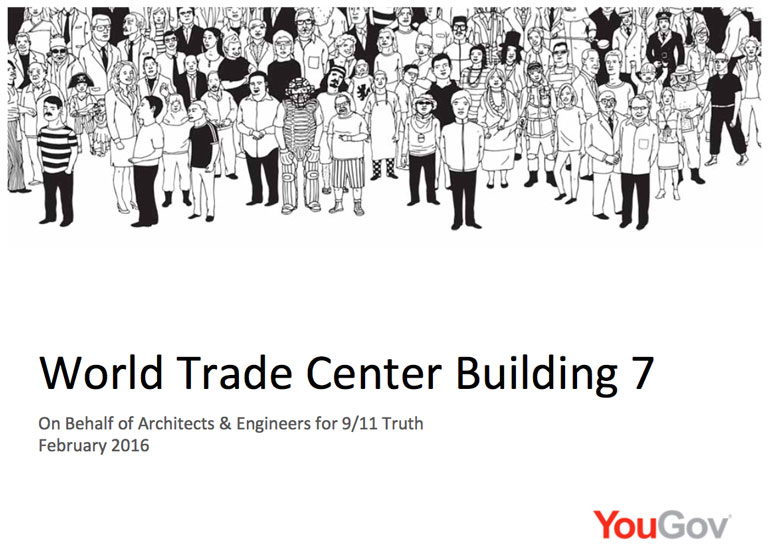 So this is our fourth YouGov survey — second in the US — and we did it at this time for two main reasons. First, we needed an update to our 2013 poll so we could reference more current results when discussing the public’s awareness and opinions surrounding Building 7. Secondly, we felt it was time to see if there had been any increase from 2½ years ago.

The survey itself measures two things: One, how much awareness is there of Building 7’s collapse? And, two, what are people’s opinions on the cause of the collapse once they've seen it? Having this information guides our strategy on how to go about educating the public. Depending on the results, it can also be a part of our case for opening a new investigation. Based on what we found, we think these results will be a major part of our communications strategy in the lead-up to the 15th Anniversary this September.

AE: And what did the survey find?

TW: It certainly reinforces what we found out from the first survey: Awareness of Building 7 is limited, but when people are shown video of its collapse, a majority suspect it was a controlled demolition and support for a new investigation far outweighs opposition. We were also very pleased to see small but significant increases both in awareness and in the tendency to suspect controlled demolition and support a new investigation. In other words, the needle has moved in the last 2½ years.

AE: How many people were polled? And how were they polled?

TW: The survey was conducted online with a sample of 1,098 respondents who were randomly selected from those who had already signed up to participate in YouGov's online polls. The great thing about working with an online polling firm is that it allows us to show the video of Building 7’s collapse and gauge peoples’ reactions, something that wouldn’t be possible with a telephone survey.

AE: How does YouGov ensure that it selects a representative sample of the US population?

TW: Well, it randomly selects a sample from its national panel of respondents to match a quota frame designed to be nationally representative, i.e., reflect the national population. It does this by setting 96 targets cells based on the age, gender, race and education level of people in the US (all interlocked with each other). They then weight to that sample frame. We know YouGov’s polling is accurate because it has been successful in predicting the results of elections for many years.

AE: Was the survey identical to the one done in the US 2½ years ago?

First, YouGov learned after conducting the earlier polls that some people were disturbed at seeing the video of Building 7. So this time YouGov wanted to add a question asking respondents if they would object to taking a survey that included a video of a building collapsing on 9/11. As a result of that new question, some 5% of respondents elected to skip the section with our questions. But we don't think the exclusion of those 5% pushed the results in one direction or the other.

AE: What was the second difference?

TW: This survey had only five questions. The previous survey had more questions relating to respondents' beliefs about 9/11. This time we omitted those questions both for cost reasons and because we didn't consider them as valuable in terms of what we wanted to find out.

Both YouGov and we believe that omitting those questions did not have any major influence on the way respondents answered the questions they were asked. So, in the end, we believe it's valid to compare the results of this survey to the one in 2013 and see if there have been any changes over time.

AE: Let’s go through the five questions and discuss the results question by question. What was the first question?

TW: The first question introduced the fact that a third building in the World Trade Center complex collapsed later in the day on 9/11. It then asked respondents if they were aware of it. 61% said yes. That compares to 54% from the last survey.

The size of that increase is worth highlighting. A 7 percentage point gain is definitely beyond the margin of error, and it translates to at least 15 million American adults becoming aware of Building 7 over the past 2½ years. 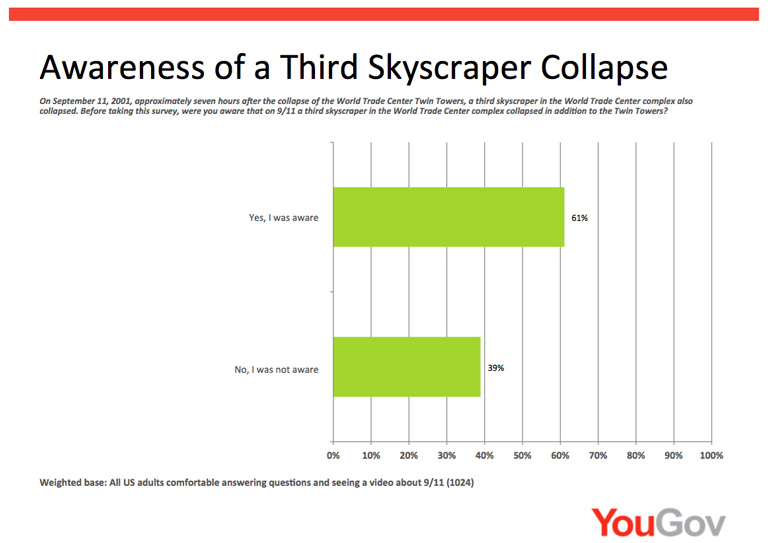 AE: And the second question?

TW: For those who were aware of a third building collapsing, we asked them to name the building. Here, they were instructed to type in the name of the building if they could recall it.

21% of those who were aware of the third collapse correctly named Building 7, which translates to 13% of everyone surveyed. Compared to 2½ years ago, it's a 3 percentage point increase, up from 10%. Given that it’s right on the edge of the margin of error, we can conclude there has probably been a small increase in the percentage of Americans who know the name of Building 7. That increase, if real, amounts to around 7 million people.

Ultimately, this means that only one out of 8 Americans knows enough about Building 7 to recall its name. That may seem discouraging, but the flipside is that there’s also huge room for growth. 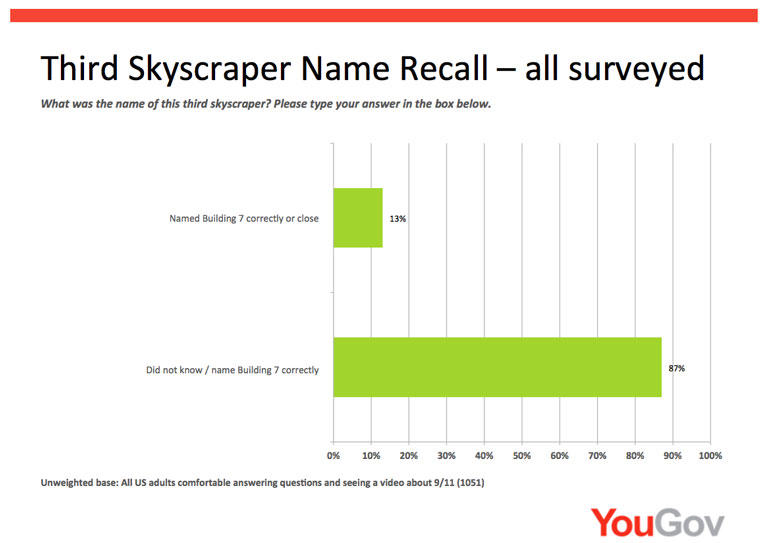 AE: And what did the third question ask?

TW: This is where we move from the “awareness” part of the survey to the “opinion” part. First, we showed them video of Building 7’s collapse from four different angles. The video lasts about 30 seconds and has no sound.

25% selected the last answer, “I don’t know.” That’s certainly understandable, as most people are seeing it for the first time and don’t have the knowledge to judge one way or the other.

But by far the most common answer was people who suspected it was a controlled demolition, which was 39% of respondents who agreed to see the video. When you group that together with the 15% of video viewers who said they were sure it was a controlled demolition, we get 55% (combining the unrounded percentages). By contrast, only 21% of video viewers said they suspected or believed it was fires (12% suspected, 9% were sure).

In other words, more then twice as many people suspect controlled demolition over people who suspect fires. That’s huge.

It's also a 9 point increase from the previous survey in terms of the percentage of people who suspect or are sure it was a controlled demolition. Again, that’s well outside the margin of error and translates to an additional 22 million Americans being more likely to suspect controlled demolition if they see the video of Building 7’s collapse — which, of course, is our goal. 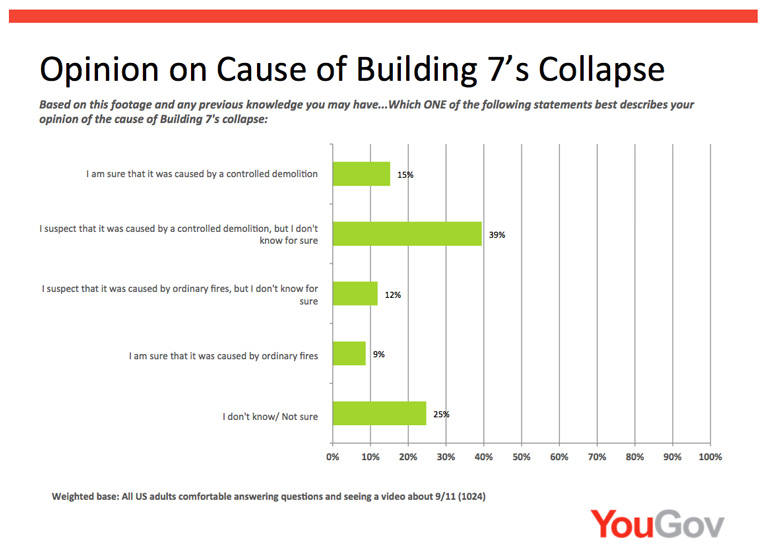 AE: Are there any differences in how various demographic groups respond?

TW: Indeed, there are. We see the biggest disparities among different age groups, races, and levels of educational attainment.

AE: What do you make of the disparities based on education?

TW: In the simplest sense, I would guess that the less formal education one has, the less likely that person will be to have faith in the government and the more open he or she will be to questioning the official account of 9/11. By contrast, someone with many years of schooling will tend to have more faith in the government and other institutions. So when he or she sees Building 7 go down, they are more likely to reject the notion that it was a controlled demolition, because that implies something's wrong with the official account of 9/11.

AE: What did the fourth question ask?

TW: The fourth question explains that an agency of the US government has concluded that fires brought down Building 7, but that critics, including a group of more than 2,000 architects and engineers, challenge the government's findings and argue that only controlled demolition can account for Building 7’s collapse. It then asks, who are you more inclined to believe — the government or the critics? 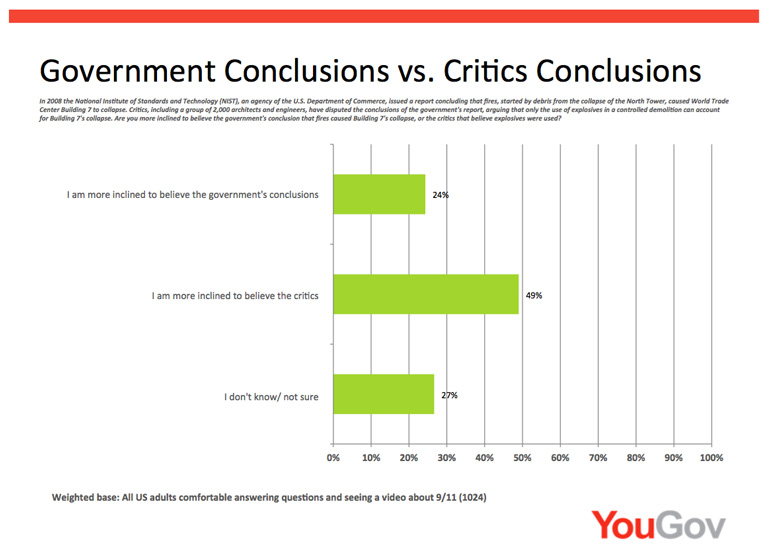 AE: How is this question different from the third question, which asked their opinion of what caused Building 7’s collapse?

TW: Well, this question is measuring something slightly different in that it attributes the two theories to two different parties and asks respondents which party they're more inclined to believe. It helps us understand whether the public is less accepting of controlled demolition once they know it contradicts the government’s account. It also allows us to point directly to the number of people who side with us and our position.

AE: What do you make of this correlation?

TW: Well, I think it shows the most resistance comes from people who are highly educated. This resistance, I believe, is rooted in an unwillingness to believe anything that might be construed as a “conspiracy theory.”

But I think the results are still encouraging. We have an even split among post-graduates, and among college graduates we have 47% saying controlled demolition to 29% saying fires among those who viewed the video. Clearly, seeing Building 7’s collapse is very powerful. The majority — even among more educated groups — can see it for what it is: a controlled demolition.

AE: What was the fifth and final question in the poll?

TW: The last question asked the extent to which they'd support or oppose a new investigation into the destruction of Building 7. The options were: (1) strongly support, (2) support, (3) neither support nor oppose, (4) oppose, and (5) strongly oppose.

That’s a massive majority of nearly three-to-one. Another way of viewing it is how incredibly small the minority of people is that oppose a new investigation. We’re talking just one in six Americans.

That being said, the sizable 29% of video viewers who neither support nor oppose a new investigation is also important to note. What we might be seeing here is a serious level of indifference. That indifference is as much an obstacle to achieving our mission as is outright resistance.

Still, though, we've made a lot of progress from 2½ years ago, when 41% supported a new investigation and 21% were opposed. Basically, we've gone from a nearly two-to-one to a nearly three-to-one majority in less than three years. That's a good sign. 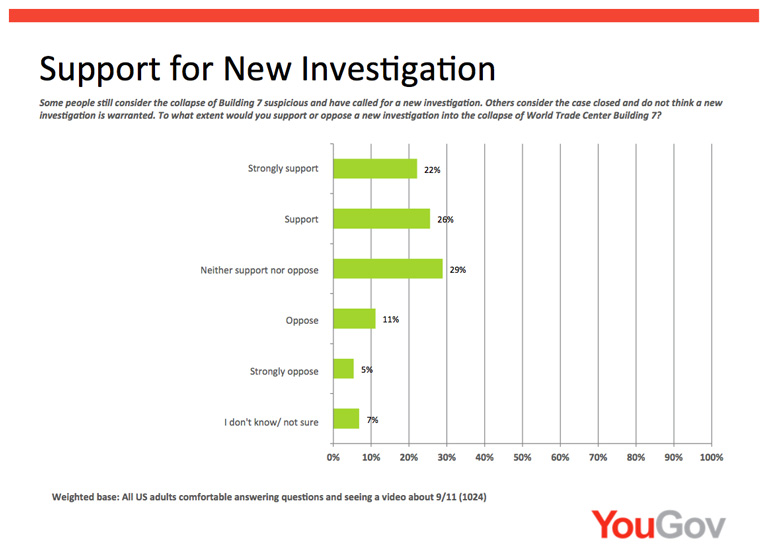 AE: Finally, how will the survey results guide AE911Truth in developing its strategy moving forward?

TW: I think the results make it quite clear that if we can reach widespread awareness of Building 7 — as in virtually every American seeing its collapse — we can generate enough support for a new investigation. How we reach that level of awareness is the question.

All figures, unless otherwise stated, are from YouGov Plc. Any interpretation of the figures is provided by AE911Truth. Total sample size was 1,098 adults. Fieldwork was undertaken between 23rd - 24th February 2016. The survey was carried out online. The figures have been weighted and are representative of all US adults (aged 18+).