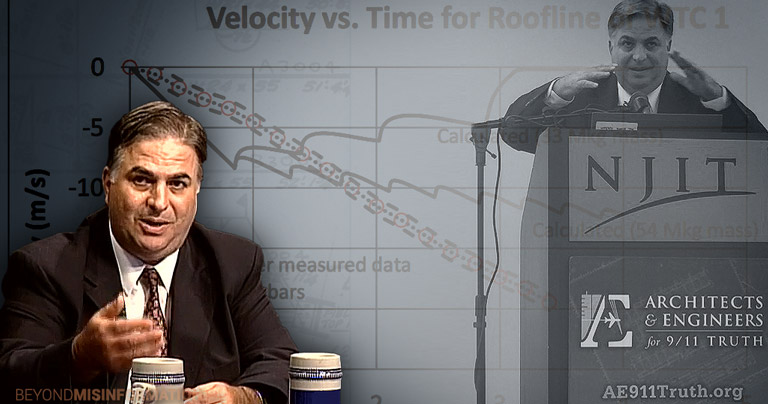 On June 19, 2016, Tony Szamboti, a mechanical engineer who has studied the World Trade Center collapses intensively for the past ten years, sent an open letter to Northwestern civil engineering Professor Zdeněk Bažant. Dr. Bažant is the author of four articles in the Journal of Engineering Mechanics that purport to explain why the lower sections of the WTC Twin Towers provided no discernible resistance to the falling upper sections. 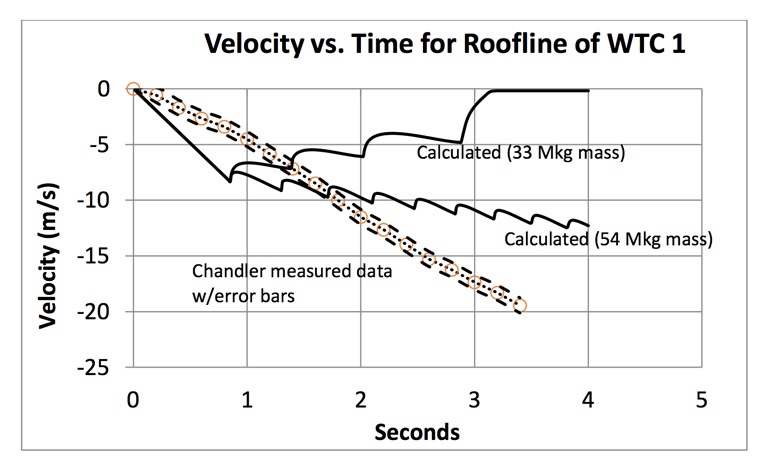 This open letter is being sent to you to request that you correct your four papers on the collapse of the WTC Towers, which were published by the Journal of Engineering Mechanics.

In these papers, the values used for the below three items:

have been shown in the intervening years to be significantly unrepresentative of the actual situation concerning the North Tower (WTC 1) at the time of its collapse.

By your use of free fall through the first story of the collapse it would seem that you had not measured the descent from video. Others have measured it, and the velocity after a fall of one story is approximately 6.13 meters/sec and not the 8.52 meters/sec velocity, resulting from a free fall through one story, used in your papers. This leads to a near doubling of the velocity component in the kinetic energy of the upper section, since it is squared with 6.132 = 37.58, and 8.522 = 72.59.

Your papers show a mass of either 58 x 106 kg or 54.18 x 106 kg for the descending upper section, which seem to correspond to 15 or 14 stories at the 3.87 x 106 kg per story mass given in two of your papers. The collapse initiation in the North Tower actually occurred at the 98th story and the actual in-service load of the 12 story upper section can be calculated, based on story masses from the NIST report, as 33 x 106 kg. This would equate to an average of 2.75 x 106 kg per story. Interestingly, in the second page of the addendum to your first paper (Bazant and Zhou 2002) you used the vibration period of the tower (14s) to estimate the mass of 44% of the 117 stories of the tower as 141 x 106 kg. If this partial mass is divided by 0.44 it gives a full mass of 320.45 x 106 kg for the whole tower. When this full mass is then divided by 117 stories it gives 2.74 x 106 kg per story. This is very close to what can be discerned from the NIST report and thus your own calculations tend to confirm it. It is thus confounding as to why you used a 3.87 x 106 kg per story mass in your papers. This per story mass seems like a maximum design load and not the actual in-service load. Use of a maximum design load, when that is not what was present during the failure, will prevent any forensic analysis from being accurate.

The overestimates of velocity and mass of the descending upper section in your papers cause it to have a kinetic energy which is several times what it actually would have been. Of course, this would make a collapse propagation more likely.

Additionally, in the 2011 paper, the mass of one story, used for the conservation of momentum loss calculation, is shown as just 0.627 x 106 kg. However, as mentioned above, in earlier papers you show it as 3.87 x 106 kg. The use of this lower figure in your calculation causes velocity loss due to conservation of momentum to be just 1.1%. With the greater mass it would have been about 7.1% from conservation of momentum alone, without even considering the column resistance losses yet. It seems this 0.627 x 106 kg mass is that of just the concrete slab. It does not include all of the additional mass on a story, which would bring it to the 2.75 x 106 kg mass that NIST shows, and that you also determined, but did not use, with your vibrational period and a concentrated mass on a massless cantilever analysis.

In the 2011 paper, you claim that the velocity loss would only be about 3% and thus too small to observe with the available video resolution. However, that would be far from the case if you corrected the velocity, mass, and column size to reflect the actual conditions. A Canadian professor, Richard Johns, and I did submit a Discussion paper to the Journal of Engineering Mechanics in 2011 regarding these errors and they took 27 months before finally telling us our Discussion was “out of scope”, although it only discussed your January 2011 paper and corrected its errors. I am not sure if you are aware of this and am attaching a letter on our experience, which also includes our Discussion of your paper.

The NIST stopped their analysis at a point where the report says the building was “poised to collapse” when the south exterior wall purportedly buckled. There is no analysis or explanation provided in the report for the horizontal propagation across the building. The NIST report simply moves from a single buckled exterior wall to your analysis for substantiation of vertical propagation. I am not sure if you are aware, but the actual horizontal propagation occurs from the southwest to northeast corners (a distance of nearly 300 ft.) across the 98th floor of the North Tower in less than a second. The measurement of the vertical descent/propagation does not show any deceleration, at any time. Focused ejections can be observed emanating from the corners and the sides of the building during the collapse. None of these three observations can be explained easily as being due to naturally caused occurrences, but can easily be explained by the use of charges.

Unfortunately, the possibility that there were charges in the buildings has not been investigated up to this point and it would appear that your papers, with these errors still intact, have provided some level of umbrage for those who presently insist it is not necessary. It is hard to believe you would approve of that knowing there are errors. It is sincerely hoped that you will correct these errors now that they have been brought to your attention. Once they are corrected your analyses can no longer be used as an argument against a new investigation to look into those things which were missed in the first attempt to investigate these collapses.