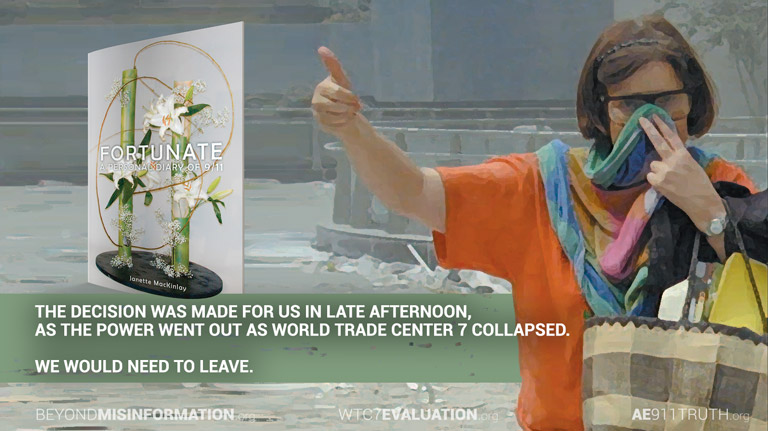 Editor's Note: After a battle with brain cancer, likely induced by the toxic dust of the World Trade Center on 9/11, accomplished sculptor, artist, and 9/11 truth-seeker Janette MacKinlay continued her journey deeper into truth, passing away on December 9, 2010. We present a small collection of stories from her amazing, heart-filled little book.

On 9/11/2001, Janette MacKinlay was living with her boyfriend, Jim, at 110 Liberty Street — a building adjacent to the World Trade Center.

She wrote her book, Fortunate: A Personal Diary of 9/11, eight years after the events of 9/11. In it, she combines imagery from the experience and selections from her prolific artwork with a personal and poignant narrative that is imbued with an artist’s sensibility. Her book persuasively conveys the shock, pain, and tragedy of that day and its immediate aftermath. It also radiates sparks of hope and flames of triumph. 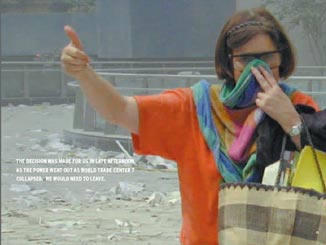 This 9/11 survivor ultimately succumbed to the literal fallout from the attack.

I wonder, as Janette did when she was writing her book, how to convey something that seems beyond words.

After both planes had crashed into the Twin Towers, Janette and Jim called loved ones to let them know they were all right. Immediately they began to accept the sudden reality that they had ringside seats at a major historical event. They began to tidy up in case they had to evacuate, so they wouldn’t have to return home to a messy flat.

When the South Tower began to explode and topple floor by floor, they barely had time to get into the hallway before their windows were blown in. The hallway surely spared them serious injury and perhaps saved their lives.

As they tried to recover from the blast, the suffocating, deadly dust immediately started choking them. Janette would later provide a sample of this toxic dust to Dr. Steven Jones, who, along with eight other researchers, would find in it one of the most conclusive “smoking guns” of 9/11.

Jim’s thoughts in those critical moments of the blast were, “What a simple way to die. . . just here in the hallway. . . no high tech approach with tubes every which way coming in and out of your body. . . just over in a few seconds. . . just that simple.”

Jim had long suffered from heart trouble. Janette’s reaction was a mixture of simple amazement that she was still living and a bemused wonderment regarding whether or not she was really dying.

Fighting for air, they made their way onto the street onto a surreal scene where “[p]eople were either inside buildings or they were dead.” The first survivors besides themselves who they saw were firemen. After thanking God for the still-live firemen, Janette and Jim sought refuge in a restaurant some distance away, where other survivors were gathered. There they awakened to the extraordinary awareness of and appreciation for every moment of existence that many who survive a close brush with death experience, where everything is intensely perceived and deep gratitude is felt for the simplest things. Some cleaner air to breathe and some ice water to drink were “luxuries” they enjoyed as they continued praying for more complete deliverance to safety and normalcy.

When the second building, the North Tower, collapsed, their location, more sheltered and distant from it, shielded them from experiencing another direct blast and another choking dust cloud. But at that point all communications with the outside world were cut off. While others walked away from the disaster site, Janette and Jim headed back towards it to gather Jim’s medicine and other essentials. They were amazed to find their building still standing, though the devastation around it was vast and overwhelming. They gathered what they needed and made their way to a nearby friend’s place to begin what would become a long, painful aftermath. 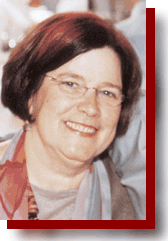 Some called Janette the heart of the 9/11 Truth Movement.

Janette describes many striking sights in her book, many of them sad. But she also tells of the many times when, through the all-consuming tragedy, triumph shone. Symbolizing recovery from the South Tower’s destruction, Janette created a piece called “10 seconds in September,” a green, leafy image reminiscent of grass growing through pavement, of nature’s relentless resilience, and of the natural, unending desire of nature to survive and even thrive.

More moments of transcendence can be found in Janette’s factual reporting of the instinctual reactions of people reaching out to each other to help in a crisis; of complete strangers offering them shelter for the remainder of the day as they made their way to their friend’s place; of the herculean efforts by rescue workers and the Red Cross to mitigate suffering and save as many lives as they could. Throughout her narrative, the preciousness and fragility of life come through, as does the survivors’ determination to make the most of their lives, which, for a time at least, had been miraculously spared. 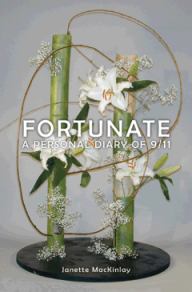 “Fortunate” is the harrowing story of a 9/11 survivor who healed her soul through art.

It is that very determination that I hope readers of this work will perceive most strongly and take and keep with them. Life is indeed incalculably precious and often fragile. Most of us, blessedly, will never be faced with such a horrific near-death experience as Janette and Jim experienced. Yet, also like Janette, all of us will leave earth. For each of us, our time here is very limited; how limited we’ll never know, and what we do with that time is of utmost importance. As Gandhi put it, “Whatever you do may be insignificant, but it is most important that you do it.” Perhaps those of us who never come close to death until that final day are not only blessed, but also less “fortunate,” because without frequent reminders, we often forget to appreciate the wonder and opportunities that abound in our all-too-brief existence.

Janette never lost her determination to live life to its utmost. She spoke of her doubts about the official story of 9/11 every chance she got, contributing what she could to what has become a worldwide movement for truth and justice. That movement, filled with many motivated people like Janette, has the potential to overcome the tide of destruction, hate, and lies — to turn that tide into an even more powerful tide of creativity, compassion, and truth.

I hope others will be inspired by Janette MacKinlay's account of the horror that she didn't merely endure but that she transformed with her many beautiful works of art. Her spirit’s thrust for life can inspire all of us to contribute our best to this movement and to our world.