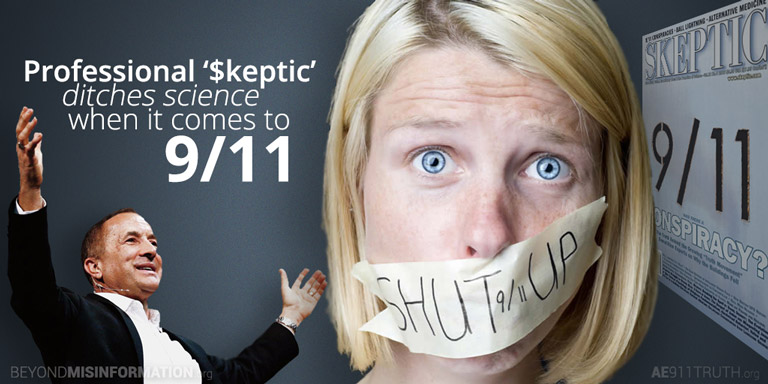 Professional ‘skeptic’ ditches science when it comes to 9/11 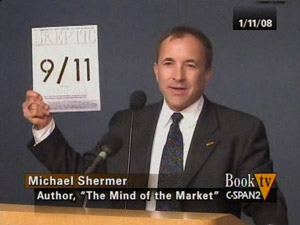 In his articles and talks, Michael Shermer puts a great deal of emphasis on the perils of self-deception. What he seems less concerned about are actual deceptions.

The founder of Skeptic Magazine is a professional conspiracy denier. Name a potential conspiracy, and Shermer will tell you why it didn’t happen. But rather than offer solid evidence that can stand up to scrutiny, he’ll reach for a humorous one-liner that he knows will satisfy an uncritical audience.

For example, in his 2010 TED Talk “The pattern behind self-deception,” Shermer uses a joke to dispense with people who challenge the official 9/11 narrative:

The line gets a big laugh, as it is intended to do. But is the inherent argument rational? Or is it rhetorical manipulation? The audience members leave not only pleased with Shermer but with themselves. They get to feel superior to those incompetent government types who could simply never pull off a conspiracy this clever.

In his articles and presentations, Shermer offers colorful examples of “theories” that he claims have no credibility, and he deftly hints that these are typical of many or most “conspiracy theories.” Using one flimsy example or another, he guides the audience to pat dismissals of any challenges to mainstream narratives. After all, why go through the hard work of confronting real evidence when flippancy is so much more economical?

In the same TED Talk, Shermer points to the unsubstantiated theory that the Bush administration placed explosive devices in the levees around New Orleans so that the city would be flooded during Hurricane Katrina. He alleges that there are those who purport to have found some of these devices after the fact.

Why is this example typical? We never find out. We are just expected to accept that it is.

Rather than deal with the substance of arguments against any official story, Shermer will focus on why people believe the things that he insists are delusions, or he’ll push the idea that it would be too difficult for participants in a conspiracy to keep the secret. For him, it’s not about evidence, it’s about the psychological makeup of the people he is trying to discredit. He calls that science, though some would call it misdirection.

Both in Skeptic and in his monthly column in Scientific American magazine, Shermer tackles all manner of “controversial” topics: UFOs, paranormal events, alternative medicine, evolution and creationism, religion and miracles, psychology and the brain, and product scams. And he’ll tell you he stands on the side of rationality while those he investigates deal in fantasy and “bad ideas.” In fact, in his first Ted Talk, given in 2006 and titled “Why people believe weird things,” Shermer referred to himself and other “debunkers” as “the Ralph Naders of bad ideas.” I think he meant this to sound like a good thing.

When Shermer isn’t debunking a bogus marijuana dousing rod or a grilled cheese sandwich alleged to sport the image of the Virgin Mary, he’s telling us we should accept official accounts of world-changing events like 9/11 and the assassination of John F. Kennedy. Not to do so, he contends, is to engage in illogical and delusional thinking.

For Shermer, it’s about patterns and how we often see them when they are not there. He has even invented his own words to describe the phenomenon. In his June 2009 article in Scientific American, “Why people believe invisible agents control the world,” Shermer defines his coined word “agenticity” as “the tendency to believe that the world is controlled by invisible intentional agents.” While that word is failing to catch on, he adds “patternicity,” which he defines as “the human tendency to find meaningful patterns in meaningless noise.” He imbues these conclusions with authority by making repeated references to the regions of the brain responsible for this erroneous pattern-seeking. 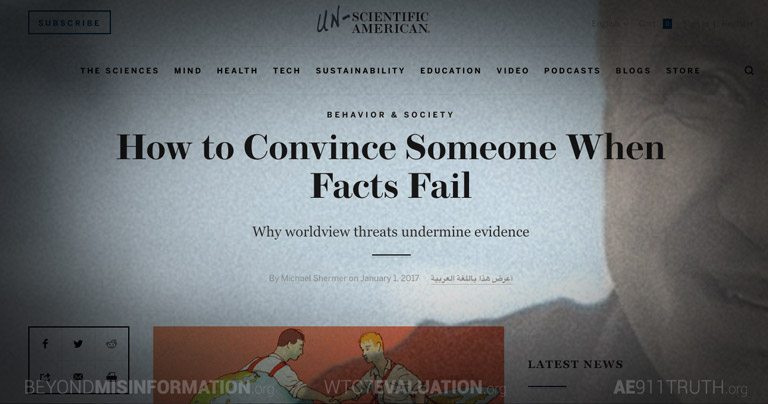 Shermer is forced to concede that it’s not all meaningless, that real conspiracies do exist (citing the Lincoln assassination), and that caution is required to avoid rejecting the patterns that really are there. But despite acknowledging this concern, he goes on to give it negligible weight. Too bad he hasn’t invented a word for those who ignore evidence of conspiracies to reach conclusions that official stories are almost always right. I propose “officialicity.”

There is no doubt that we humans sometimes do go beyond what actual evidence reveals and identify patterns that don’t really exist. But he uses this fact as a convenient catch-all to explain why most “conspiracy theories” are false. 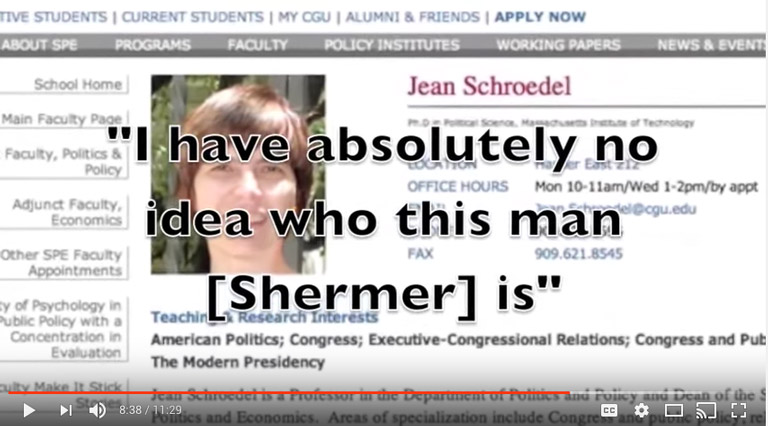 The 9/11 Truth Movement has certainly not escaped Shermer’s attention, as we see in a January 2017 article he wrote for Scientific American with the headline, “How to convince someone when facts fail: why worldview threats undermine evidence.”

In it, Shermer starts with a statement that is true of many people, not just those who are open to conspiracies:

“Have you ever noticed that when you present people with facts that are contrary to their deepest held beliefs they always change their minds? Me neither. In fact, people seem to double down on their beliefs in the teeth of overwhelming evidence against them. The reason is related to the worldview perceived to be under threat by the conflicting data.”

But isn’t this exactly what many self-proclaimed “skeptics” do? Not only do they reject out of hand the position that 9/11 was a false flag operation, but they won’t even look at the overwhelming evidence that the three World Trade Center towers were brought down in controlled demolitions. Here, he gets to 9/11 specifically:

“The 9/11 truthers focus on minutiae like the melting point of steel in the World Trade Center buildings that caused their collapse because they think the government lies and conducts ‘false flag’ operations to create a New World Order.”

Focus on minutiae? Like science? The laws of physics?

Further, Shermer is saying that members of the Truth Movement start with the conclusion that the government lies and conducts false flag operations and that its purpose is to create a New World Order. A package deal. They then seek out evidence to confirm their belief, he asserts. While he doesn’t use the term, he is saying this is simply the result of “confirmation bias,” not science. He does not, however, feel the need to support his claim. Just saying it makes it true.

Using this example and others, Shermer attempts to support his statement that “proponents' deepest held worldviews were perceived to be threatened by skeptics, making facts the enemy to be slayed.”

Get it? It’s the “skeptics” who have the facts. Those who challenge any official narrative only have deep world views and beliefs. According to him, it’s the “conspiracy theorists” who must slay the facts to prevent their beliefs from being contradicted.

Shermer’s brand of misdirection attempts to discredit those who challenge the government explanation for how the towers were brought down. And this is how he approaches any of the potential conspiracies he addresses.

But is it scientific to focus more on who is making a particular argument than on the quality of that argument? Does this approach match up with his self-professed reliance on evidence and actual research?

On the web site Skeptical about Skeptics, a profile-piece that is critical of Shermer offers these insights:

“He particularly warns his readers against people who have ideologies to pursue, whose pattern of thinking ‘consistently ignores or distorts data not for creative purposes but for ideological agendas.’ Unfortunately he himself has an ideology to pursue and makes untruthful and pseudoscientific claims.”

Shermer has dealt with 9/11 in various forums. He and Richard Gage, founder Architects & Engineers for 9/11 Truth, debated this very topic on Oakland’s KKGN radio station back in 2008. This required Shermer to go into more detail about his positions, but his arguments showed the extent to which he pays lip service to science. Clearly, his goal is to poo-poo conspiracy theories, not to get to the truth.

For example, he couldn’t rebut Gage’s evidence for the use of thermite in the destruction of the three WTC towers, so he just offered this:

“You just get focused on thermite. I mean, who knows? I haven’t looked into it. What if you’re wrong? What if that isn’t what they saw? So what?”

What an extraordinary admission from someone who published an entire issue of his magazine on the 9/11 evidence. Of course, Gage never said that the whole case hinged on any one piece of evidence. But the evidence for the use of thermite is powerful, and Shermer could only deflect because he hadn’t bothered to do any research on the subject.

Let’s take a look at Shermer’s astonishing explanation for why the Twin Towers fell through the path of greatest resistance:

“Why would a building fall flat straight down? Why wouldn’t it topple over? We always picture in the old Japanese monster movies, you know, swiping the buildings away, and it topples over. The answer is that they are not a solid block of material. Almost 95 percent, about 90-95 percent, of an office building is empty air. They’re held together by these structural foundations and so forth, so they can’t fall right over; they have to collapse pretty much straight down.”

What? Was there some science in that explanation that I missed? If the towers “have to” collapse straight down, why haven’t other steel-framed skyscrapers done this after catching fire and burning for far longer? Why did this happen only on September 11, 2001? Shermer acts as if the only thing he has to explain about the destruction of the towers is why they didn’t fall sideways, as if swatted by Godzilla.

And this is because of all the air in the buildings?

Aside from this narrative being false, it’s an attempt to answer the wrong question. The issue for most in the 9/11 Truth Movement is not why the towers didn’t topple over, it’s why they came down at all.

Here is a typical chronicling of the WTC evidence by Gage that his opponent never adequately answered:

How does Shermer explain the free fall? He doesn’t.

Every time Gage cited evidence that Shermer could not account for, he simply dismissed it or denied its existence. When Gage brought up the pools of molten iron found under all three WTC towers, Shermer said he hadn’t heard anything to support this claim. Before Gage could cite some of the dozens of accounts confirming the molten iron, Shermer pivoted to the subject of who Gage thinks brought the towers down and how they could have planted the explosives without being discovered. Obviously the Skeptic publisher was much more comfortable looking at these broad questions than he was the scientific ones within AE911Truth’s area of concentration.

Shermer worked hard to remain in his comfort zone as he reached for the familiar debunker argument that there was so much chaos going on that day, and that one would expect “anomalies.”

“There’s going to be so many anomalous things that happened, especially with so many people involved. So our minds search for these little anomalies, ignoring the vast majority of the evidence.”

Is that what our minds do? I wonder which part of the brain searches for anomalies and avoids evidence. Is it the pre-frontal cortex? The fusiform gyrus? The temporal lobe? And is it the left hemisphere or the right?

More to the point, I wonder which part automatically believes every official story and prefers glib one-liners to real evidence.

I bet Shermer could tell me.

In this episode of 9/11 Free Fall, host Andy Steele is joined by Dana Carson, an activist from the Northern California 9/11 Truth Alliance. They review a recent public exchange they had with "skeptic" Michael Shermer at a talk he recently gave in the Bay area.