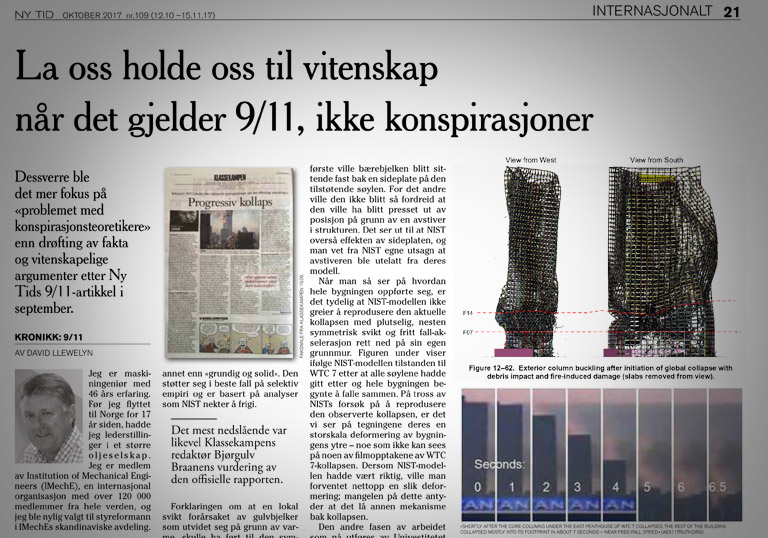 Let's Start with Science, Not Conspiracies, When It Comes to 9/11

Editor’s Note: The following article, by Norway-based mechanical engineer and AE911Truth petition-signer David Llewelyn, was published in the monthly Norwegian newspaper Ny Tid on October 12, 2017. Ny Tid invited Llewelyn to write an article for its October 2017 issue following the controversy that erupted in Norway when it published an article by Ted Walter, AE911Truth’s director of strategy and development, in its September 2017 issue. Llewelyn’s article is reprinted below in English with Ny Tid’s permission. Walter’s article, also reprinted in English with Ny Tid’s permission, can be read here.

I am a mechanical engineer with 46 years experience. Before moving to Norway 17 years ago, I held senior management positions with a major oil company. I am a Fellow of the Institution of Mechanical Engineers, an international organization with over 120,000 members worldwide, and I was recently elected Chairman of the Institution’s Scandinavian Branch.

I was disappointed to witness the hysteria last month surrounding the publication of an article in Ny Tid that questioned the official account of the World Trade Center’s destruction. Each comment I read, one after another, was focused on smearing Ny Tid’s editor and the author of the article as “conspiracy theorists,” rather than analyzing the facts and arguments. The “fact-checking” website Faktisk.no pretended to “fact check” the Ny Tid piece, but, in truth, Faktisk merely cherry-picked a handful of arguments in a poor attempt at rebutting the piece and left most of the evidence untouched.

But most disheartening was the decision of Klasskampen to drop Ny Tid from its distribution, presumably on the basis of the arguments put forth in editor Bjørgulv Braanen’s letter published on September 19, 2017. For some reason, which Mr. Braanen does not actually explain, he finds the official report issued by the National Institute of Standards and Technology (NIST) about the collapse of World Trade Center Building 7 (WTC 7) to be “thorough and solid.”

I do not know if Mr. Braanen read NIST’s report on WTC 7, but everything he wrote about the collapse of WTC 7 seems to have been drawn from the article he cited, published by the magazine Popular Mechanics published in 2008. In fact analysis shows the Popular Mechanics article is simply a regurgitation of NIST’s press release in 2008 — though, for some reason, the article was “republished” on August 1, 2017.

In truth, NIST’s WTC 7 report is anything but “thorough and solid.” It is far-fetched, supported by selective choice of evidence, and based on analyses that NIST refuses to release. The idea of a local failure being initiated by thermally expanding floor beams which then leads to the symmetrical, free-fall collapse of the entire structure is so improbable that it would require a staggering amount of evidence to even be considered plausible. But NIST has not provided that evidence. Instead, it has merely given us assertions of what happened, based on computer modeling data that it will not release, even to structural engineers.

Fortunately, a new study due to report in November 2017, is now being completed by researchers at the University of Alaska Fairbanks, using the original drawings for the building. This study is allowing engineers to use the most up-to-date modeling programs (SAP2000 and Abacus), and the extensive computing power not available in 2008, to reassess the conclusions drawn by NIST. It is funded by Architects & Engineers for 9/11 Truth. One month ago, the study’s lead investigator, Dr. Leroy Hulsey, gave a presentation on the interim findings of the study.

Results Based on Analysis of the Facts

According to Hulsey’s results, the first step in the unlikely scenario offered up by NIST is not even possible. Even under the worst fire conditions, the floor beams in question could not have expanded enough in a certain direction to push a key girder off its seat. And if the floor beams did expand far enough, the girder would have been prevented from coming off its seat by two separate factors indicated in the drawings: First, the girder would get stuck behind the side plate of the adjoining column. Second, it would not distort enough to be pushed off its seat, because of the presence of a “stiffener.” It appears that NIST ignored the effect of the side plate, and we already know that NIST omitted the presence of the stiffener from its model, because it admitted to doing so.

Equally important, when we look at the behavior of the entire building, we see that NIST’s modelling cannot replicate the actual collapse. The figure below shows the state of WTC 7, according to NIST’s model, just after all the columns had buckled and the entire building started to move downward. Despite NIST’s best attempts to copy the observed collapse, what we see in their drawings is large-scale deformation of the building’s exterior, which is not seen in any of the videos of the actual collapse. While such deformation would be expected if their model was correct, the absence of exterior deformation in the actual collapse indicates a totally different mechanism of collapse. The second phase of the work in Alaska will consider how alternative collapse mechanisms fit the observed collapse. It appears likely that the only way the actual collapse could be simulated is that all the columns in the building had to be severed simultaneously in a deliberate pattern. 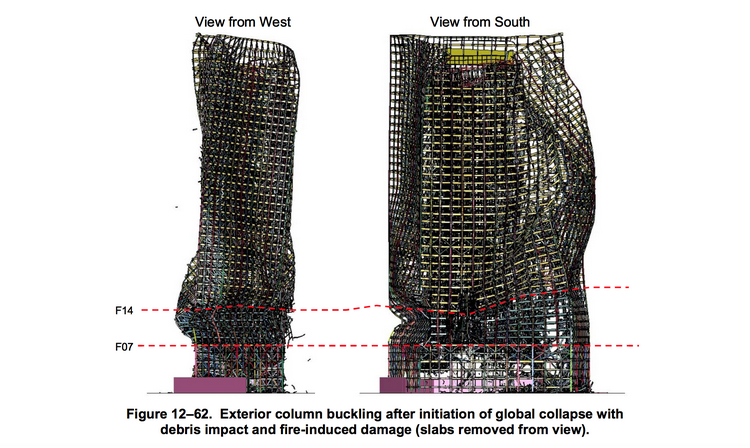 Another aspect of WTC 7’s collapse that is virtually impossible to explain according to the hypothesis of fire-induced failure is that the building came down in absolute free fall for the first approximately 2.25 seconds of its visible descent. WTC 7’s free-fall acceleration is shown in the graph below, which was produced by physics teacher David Chandler from videos. Not only that, WTC 7’s roofline can be seen one moment standing still, and the next going to free fall instantaneously across its entire width — a strong indication that all major columns in the lower part of the building were severed nearly simultaneously.

In spite of this evidence, NIST chose to exclude the use of explosives as a failure mechanism. The claim that no one heard them is simplistic at best. There are, I understand, low-impact explosives available that can rapidly cut steel. And secondly, TV recordings do exist of multiple explosions just prior to the building collapse. Also let’s not forget that a recognized expert in building demolition, Danny Jowenko, had no doubt in his mind that this was a routine demolition job when he was shown video of the collapse.

Now back to Mr. Braanen’s article. To his credit, he makes his thought process completely transparent. The reason he is so unwilling to accept that WTC 7 may have been destroyed by controlled demolition is because, as he puts it, it would mean that the world’s greatest conspiracy theory is true.

My approach is not to speculate on conspiracy theories, but to use my professional judgement to evaluate whether the NIST explanation comes close to confirming the visual and other evidence of how WTC 7 collapsed. It is part of an engineer's DNA to try to understand a sequence of events and to study how things interact. What NIST is asking us to believe is that the building fell like a house of cards, when we engineers know that a steel-framed building will behave more like a Lego construction, offering resistance to any local failure. I find it deeply disturbing that one cannot evaluate such issues scientifically without being branded as a “conspiracy theorist.”

Focus on the Facts

For now, let us cease this hysterical debate about conspiracies and put our energy into finding out what really happened to WTC 7. The Alaska report due to be released in November will, unlike the NIST study, be peer-reviewed by anyone out there who wants to make the effort to find the truth. I strongly encourage you put the chorus of opinions on one side, and base your own conclusions on a scientific analysis of the facts.