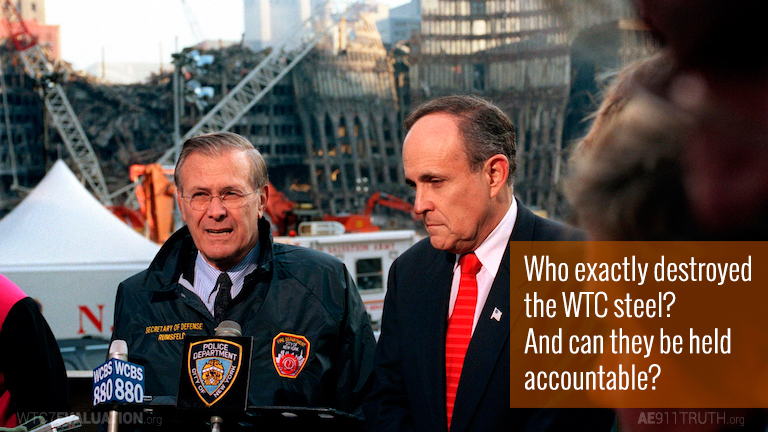 Who exactly destroyed the WTC steel? And can they be held accountable?

On April 11, 2018, AE911Truth added a new piece to our library of technical articles titled, “Documenting the Destruction of Physical Evidence at the World Trade Center.”

The purpose of publishing the article on that date was to provide well-sourced information supporting the claim that New York City Mayor Rudolph Giuliani’s role in destroying the WTC evidence was “well-documented” — a claim we made in an accompanying news article, “Lawyers and Victims’ Families File Petition for Federal Grand Jury Investigation,” on the same day.

The larger reason for publishing the technical article was to clarify exactly who was responsible for destroying the WTC steel. The destruction of this evidence is widely known in the 9/11 Truth movement, but many are unaware of who actually carried it out. For example, some mistakenly believe the evidence was destroyed by FEMA, the government agency that conducted the first investigation.

Furthermore, we wanted to counter any suggestion that the destruction of evidence was simply an innocent action that had the unintended consequence of preventing a proper forensic investigation.

The record also identifies four individuals who were most responsible for ordering and carrying out the recycling of the steel: Mayor Rudolph Giuliani, NYC Department of Design and Construction (DDC) Commissioner Kenneth Holden, DDC Deputy Commissioner Michael Burton, and cleanup advisor Richard Tomasetti of Thornton-Tomasetti Engineers.

In New York State, hindering prosecution of a class A felony (such as first degree murder) by way of destroying physical evidence is a class D felony and has a statute of limitations of three years. However, a strong argument can be made that the offense has not yet been discovered because prosecutors and the larger public have still not recognized, almost seventeen years after the crime, that the Twin Towers were destroyed by controlled demolition (in part because the offenders’ destruction of the physical evidence had its intended effect).

Thus, the destruction of physical evidence at the World Trade Center is likely to remain prosecutable beyond the point in time when it becomes widely recognized that the Twin Towers were destroyed by controlled demolition — whenever that may be.

We invite you to read the article, “Documenting the Destruction of Physical Evidence at the World Trade Center.”