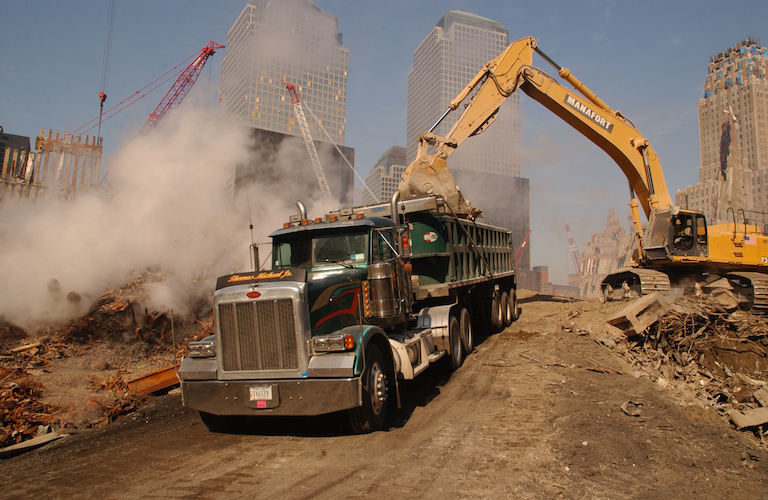 Documenting the Destruction of Physical Evidence at the World Trade Center

Editor’s Note: This article was originally written as a letter to Manhattan District Attorney Cy Vance as part of a four-week letter writing campaign by the NYC Coalition for Accountability Now (NYC CAN) in 2010. Each week, hundreds of activists participated in mailing identical letters to the District Attorney in an attempt to get him to investigate the unpermitted demolition of World Trade Center Building 7. This, the fourth and final letter of the campaign, presented carefully sourced, publicly available information on the illegal destruction of physical evidence, with a focus on identifying individuals most responsible for ordering and carrying out the recycling of the structural steel.

“[A] person ‘renders criminal assistance’ when, with intent to prevent, hinder or delay the discovery or apprehension of…a person he knows or believes has committed a crime…he...suppresses, by any act of concealment, alteration or destruction, any physical evidence which might aid in the discovery or apprehension of such person or in the lodging of a criminal charge against him;” 1

Official acknowledgement of the destruction of physical evidence from the WTC

“In the month that lapsed between the terrorist attacks and the deployment of the [FEMA Building Performance Assessment Team (BPAT Team)], a significant amount of steel debris—including most of the steel from the upper floors—was removed from the rubble pile, cut into smaller sections, and either melted at the recycling plant or shipped out of the U.S. Some of the critical pieces of steel—including the suspension trusses from the top of the towers and the internal support columns—were gone before the first BPAT team member ever reached the site. Fortunately, an NSF-funded independent researcher, recognizing that valuable evidence was being destroyed, attempted to intervene with the City of New York to save the valuable artifacts, but the city was unwilling to suspend the recycling contract.”

“[T]here is so much that has been lost in these last six months that we can never go back and retrieve. And that is not only unfortunate, it is borderline criminal.”

“Normally when you have a structural failure, you carefully go through the debris field looking at each item – photographing every beam as it collapsed and every column where it is in the ground and you pick them up very carefully and you look at each element. We were unable to do that in the case of Tower 7.”

Control of the WTC cleanup

In the aftermath of the attacks, protocol for disaster cleanup and investigations was not followed. According to the New York Times: 5

“In other disasters, FEMA, the Army Corps of Engineers and other federal agencies have played a more central role in making decisions about cleanup and investigations. But from the start, they found that New York had a degree of engineering and construction expertise unlike any they had encountered.

“‘They wanted to do a lot of things on their own,’ said Charles Hess, who is in charge of civil emergency management for the Army Corps.”

New York City’s Department of Design and Construction (DDC) took control of the site as a result of Mayor Giuliani’s “back-room decision to scrap the organization charts, to finesse the city’s own Office of Emergency Management (OEM), and to allow the DDC to proceed”: 6

“[T]here was a shift in power in their direction that was never quite formalized and, indeed, was unjustified by bureaucratic logic or political considerations. The City’s official and secret emergency plans, written before the attack, called for the Department of Sanitation to clean up after a building collapse. A woman involved in writing the latest versions – a midlevel official in the OEM – mentioned to one of the contractors a week after the Trade Center collapse that she still did not quite know what the DDC was.”

“Burton, who had become the effective czar for the cleanup job, had made it clear that he cared very little about engineering subtleties like the question of why the towers first stood, then collapsed on September 11. ‘We know why they fell,’ he said. ‘Because they flew two planes into the towers.’ But he was deeply immersed in the details of hauling steel out of the debris pile.”

By September 28, 2001, 130,000 tons of debris had already been removed from the site,8 in what one journalist with unrestricted access to the site called, “the most aggressive possible schedule of demolition and debris removal.” 9

The decision to destroy the physical evidence

“[O]fficials at the Department of Design and Construction, including Michael Burton, had decided to ship virtually all of the steel to scrap yards, where it would be cut up, shipped away, and melted down for reuse before it was inspected… Burton cleared the decision with Richard Tomasetti of Thornton-Tomasetti Engineers. Months later, Tomasetti would say that had he known the direction that investigations into the disaster would take, he would have adopted a different stance. But the decision to quickly melt down the trade center steel had been made.” [Underline added for emphasis]

However, Mr. Tomasetti’s alleged ignorance of the need to save the steel is questionable given his knowledge of engineering investigations, and given that his business partner, Charles Thornton, was a lead member on the team of engineers initially assembled by the American Society of Civil Engineers (ASCE) to investigate the cause of the collapses. The ASCE team, which later became the FEMA Building Performance Assessment Team (BPAT), reportedly requested early on that the steel be saved. According to Times reporters Glanz and Lipton: 11

“[O]n September 28, the New York Times learned that the city was recycling the steel. When the Times contacted Kenneth R. Holden, commissioner of the Department of Design and Construction, he said that no one from the investigative team had asked him to keep or inspect the steel. The ASCE, it turned out, had faxed a request, but to the wrong fax machine. Late that afternoon, after reporters shuttled the correct fax number to the ASCE, Holden said that a request had finally reached him.”

By September 28, the DDC is publicly known to have been aware of the BPAT’s request for the steel to be saved, however, the decision to recycle the steel stood.

Of course, Mayor Giuliani – previously a U.S. Attorney – and the DDC had to be fully aware of the illegality of destroying the physical evidence prior to their decision to recycle the steel. Their refusal to desist from recycling the steel when asked by the investigative team to do so – still less than three weeks into the cleanup effort, with hundreds of thousands of tons of steel still salvageable, and relatively negligible revenue from selling the steel not an issue because there was virtually unlimited federal funding for the cleanup effort – strongly suggests their contravention of the law was deliberate and motivated by intent to prevent the discovery of a crime they knew had taken place.

The continued destruction of evidence despite public outcry

In the months that followed, the city ignored mounting calls from the public to halt its recycling of the steel. According to Times reporters Glanz and Lipton: 12

“The decision to go on with the recycling program fueled outrage among the victims’ families. On December 14, nearly three months after the program had been disclosed, Sally Regenhard was standing in a drizzle outside City Hall protesting the recycling decision. Her son, Christian, a firefighter, had died in the towers’ collapse. ‘We’re here today to call for a stop to the destruction of evidence, composed mainly of steel,’ she said.”

The outcry was echoed by prominent voices in the fire-engineering community. Fire Engineering editor Bill Manning wrote on January 1, 2002: 13

“For more than three months, structural steel from the World Trade Center has been and continues to be cut up and sold for scrap. Crucial evidence that could answer many questions about high-rise building design practices and performance under fire conditions is on a slow boat to China, never to be seen again in America until you buy your next car. Such destruction of evidence shows the astounding ignorance of government officials to the value of a thorough, scientific investigation of the largest fire-induced collapse in world history. I have combed through our national standard for fire investigation, NFPA 921, but nowhere in it does one find an exemption allowing for the destruction of evidence for buildings over 10 stories tall… As things stand now and if they continue in such fashion, the investigation into the World Trade Center fire and collapse will amount to paper- and computer-generated hypotheticals.”

Calls to halt the recycling fell on deaf ears. According to Times reporters Glanz and Lipton: 14

“Officials in the mayor's office declined to reply to written and oral requests for comment over a three-day period about who decided to recycle the steel and the concern that the decision might be handicapping the investigation. ‘The city considered it reasonable to have recovered structural steel recycled,’ said Matthew G. Monahan, a spokesman for the city's Department of Design and Construction, which is in charge of debris removal at the site.”

Why didn’t the city simply stop recycling the steel? Again, the outright refusal of city officials to desist from recycling the steel strongly suggests their contravention of the law was deliberate and motivated by intent to prevent the discovery of a crime they knew had taken place.