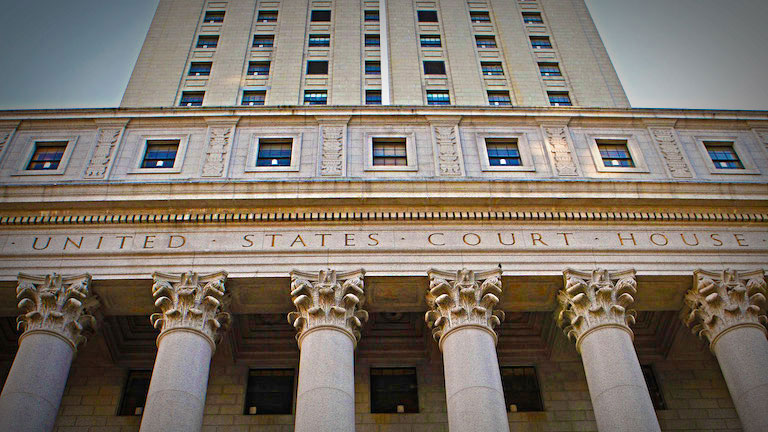 Yesterday morning, attorneys from the Lawyers’ Committee for 9/11 Inquiry, together with more than a dozen family members of 9/11 victims, filed a petition with the interim U.S. Attorney for the Southern District of New York, Geoffrey S. Berman, demanding that he present evidence of unprosecuted federal crimes at the World Trade Center on September 11, 2001, to a special grand jury. 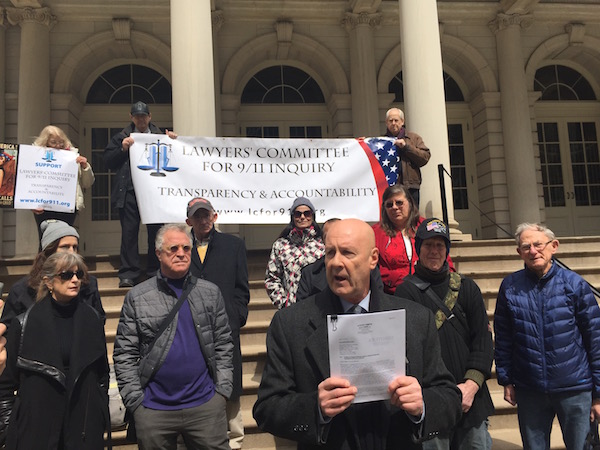 David Meiswinkle, Esq., of the Lawyers’ Committee for 9/11 Inquiry, at a press conference on the steps of New York City Hall, holds the petition just filed with the U.S. Attorney for the Southern District of New York.

According to the 52-page petition, which is accompanied by 57 exhibits, federal statute requires the U.S. Department of Justice to relay citizen reports of federal crimes to a special grand jury. The unprosecuted crime alleged to have taken place on 9/11 is the bombing of a place of public use or a government facility — as prohibited under the federal bombing statute or 18 U.S.C. § 2332f — as well as a conspiracy to commit, or the aiding and abetting of, said offense.

The petition states, “The Lawyers’ Committee has reviewed the relevant available evidence . . . and has reached a consensus that there is not just substantial or persuasive evidence of yet-to-be-prosecuted crimes related to the use of pre-planted explosives and/or incendiaries . . . on 9/11, but there is actually conclusive evidence that such federal crimes were committed.”

A federal grand jury has broad powers to investigate the alleged crimes and to return an indictment for signature and prosecution by the U.S. Attorney. The petition notes, “If any crime ever warranted a full special grand jury inquiry, the mass murder of thousands on our nation’s soil on 9/11 clearly does.” 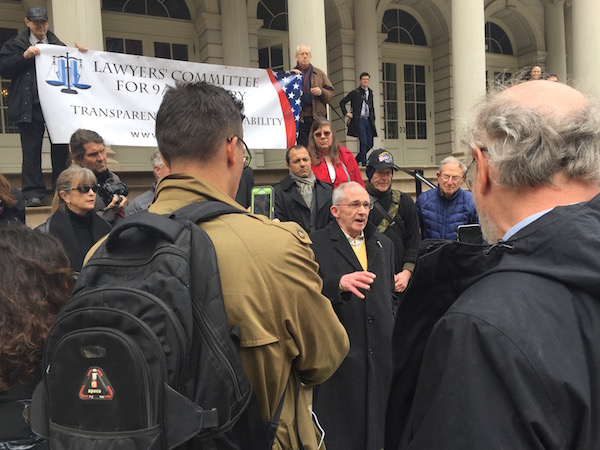 Bob McIlvaine, one of 15 victims’ family members who signed the petition to the U.S. Attorney, speaks at the April 10th press conference at New York City Hall following the filing of the petition.

For the time being, the Lawyers’ Committee will let the process run its course. “We intend to step back now for a reasonable time and be respectful of the confidential nature of the grand jury proceedings, although we have offered to assist in the presentation of this evidence to a special grand jury," Mr. Harrison commented.

This will not be the first time that interim U.S. Attorney Geoffrey Berman has dealt with crimes that intersected with U.S. national security matters. According to The New York Times, “In 1987, Mr. Berman was hired by Lawrence E. Walsh to serve in the independent counsel’s office in Washington, which was then investigating the Iran-contra affair.” The newspaper reported that Mr. Berman “helped convict Thomas G. Clines, a former senior operative for the Central Intelligence Agency, on tax fraud charges related to the Iran-contra affair.”

However, any expectation that Mr. Berman will make good on his duty to present the reported evidence to a grand jury must be tempered by the fact that, immediately prior to his appointment as U.S. Attorney, he was a law partner of former New York City Mayor Rudolph Giuliani, whose role in destroying physical evidence of the crimes in question is well-documented. Still, the mandatory nature of the law and the redress available through a mandamus action mean it is well worth the attempt to put the evidence in front of a grand jury, in the opinion of the Lawyers’ Committee.

The Culmination of Hard Work and Collaboration with AE911Truth

The voluminous and detailed petition filed by the Lawyers’ Committee and backed by more than a dozen 9/11 family members is the culmination of years of hard work and collaboration. It all began when several attorneys who signed the AE911Truth petition started working together in 2014 and later decided to form this organization.

On the 15th anniversary of 9/11, AE911Truth and the Lawyers’ Committee held a two-day symposium called Justice In Focus at New York City’s Cooper Union. There, several expert witnesses affiliated with AE911Truth testified before a distinguished panel of attorneys representing the Lawyers’ Committee, including the late Ferdinando Imposimato, Honorary President of the Supreme Court of Italy.

Today, that testimony makes up a significant portion of the 52-page petition and 57 exhibits filed with the U.S. Attorney. Videos of the Justice In Focus symposium can be viewed in AE911Truth’s video gallery. The above-mentioned expert testimony is in the video titled “Sunday Morning Events” as well as in the videos of Dr. Leroy Hulsey and Dr. Graeme MacQueen.

Legal panelists evaluate the evidence given by more than a dozen AE911Truth technical and building professionals, who testified at the September 2016 Justice In Focus symposium.

In the year and a half since that landmark event, AE911Truth has collaborated with the Lawyers’ Committee on developing civil litigation strategies for pursuing 9/11 Justice. Most recently, AE911Truth provided technical feedback on the petition to the U.S. Attorney and conducted outreach on behalf of the Lawyers’ Committee to mobilize victims’ family members to sign the petition.

AE911Truth will follow with great interest any developments related to the pending grand jury petition and report on them as news becomes available.

In the meantime, the Lawyers’ Committee is inviting all members of the public to add their names to the grand jury petition. We heartily encourage all supporters of 9/11 Truth and Justice to visit the Lawyers’ Committee website and sign the petition, so that the U.S. Attorney for the Southern District of New York will know that thousands of people are watching.

The petition can be read at LawyersCommitteefor9-11Inquiry.org.

Ted Walter is the director of strategy and development for Architects & Engineers for 9/11 Truth (AE911Truth). In 2015, he authored AE911Truth’s Beyond Misinformation: What Science Says About the Destruction of World Trade Center Buildings 1, 2, and 7, and in 2016, he authored AE911Truth’s World Trade Center Physics: Why Constant Acceleration Disproves Progressive Collapse. He holds a Master of Public Policy degree from the University of California, Berkeley.