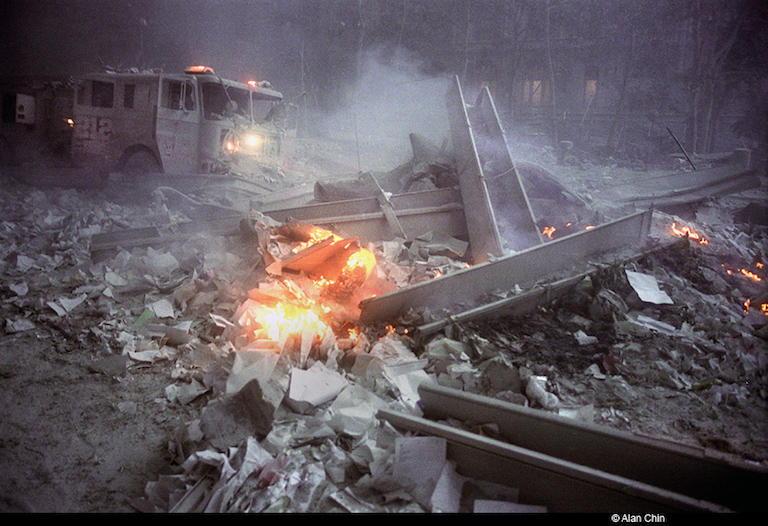 The following is a compilation of documented eyewitness accounts of molten metal at the World Trade Center.

Leslie Robertson, structural engineer for the design of the World Trade Center

"[T]hey pulled out the big block of concrete and there was like a little river of steel flowing."

Told AFP that he saw pools of "literally molten steel" at the World Trade Center.

Quoted in The History Channel's “World Trade Center: Rise and Fall of an American Icon”:

"The fires got very intense down there and actually melted beams where it was molten steel that was being dug up."

Abolhassan Astaneh, professor of civil engineering at the University of California, Berkeley

One of the leading structural engineers who studied the collapse of the World Trade Center on 9/11:

"I saw melting of girders in World Trade Center."

"There are both video tape and still photos of the molten steel being 'dipped' out by the buckets of excavators."

"You get down below and you'd see molten steel—molten steel running down the channel rail, like you're in a foundry, like lava."

"Underground fires raged for months. O'Toole remembers in February seeing a crane lift a steel beam vertically from deep within the catacombs of Ground Zero. 'It was dripping from the molten steel,' he said."

"In the first few weeks, sometimes when a worker would pull a steel beam from the wreckage, the end of the beam would be dripping molten steel."

"Going below, it was smoky and really hot. . . . The debris past the columns was red-hot, molten, running."

"A three-foot stalagmite of steel, which looks for all the world like a drip candle, sits next to one of the immense steel columns that held up the north face of the tower."

Turner himself crawled through an opening and down crumpled stairwells to the subway, five levels below ground. He remembers seeing in the darkness a distant, pinkish glow — molten metal dripping from a beam.

"In the early days, the streams of molten metal that leaked from the hot cores and flowed down broken walls inside the foundation hole.”

"Feeling the heat, seeing the molten steel, the layers upon layers of ash, like lava, it reminded me of Mt. St. Helen's and the thousands who fled that disaster.”

"What you had were large columns of steel that were just stuck into massive amounts of molten steel and other metals."

With no special protective gear, he worked within a few feet of still burning fires, [which were] "like a volcano," hot enough that molten steel could be seen dripping down. "My boots melted every night," he recalled. "You just didn't stand in one place too long."

"I went outside and saw a large hole in the left-hand tower, approximately 80 stories up. There was smoke coming out, but not a lot of fire. I could also see streams of molten metal coming from undamaged areas of the building, in three different places."

"He remembers seeing in the darkness a distant, pinkish glow— molten metal dripping from a beam—but found no signs of life."

"Underground, it was still so hot that molten metal dripped down the sides of the wall from [WTC] Building 6.”

"Fires are still actively burning and the smoke is very intense," reports Alison Geyh, Ph.D. "In some pockets now being uncovered, they are finding molten steel."

"I talked to many contractors and they said they actually saw molten metal trapped, beams had just totally had been melted because of the heat."

"For about two and a half months after the attacks, in addition to its regular duties, DSNY played a major role in debris removal — everything from molten steel beams to human remains."

"Fires burned and molten steel flowed in the pile of ruins still settling beneath her feet."

“The workers go through three pairs of rubber boots a day because they melt in the three-week-old fire of molten metal and jet fuel."