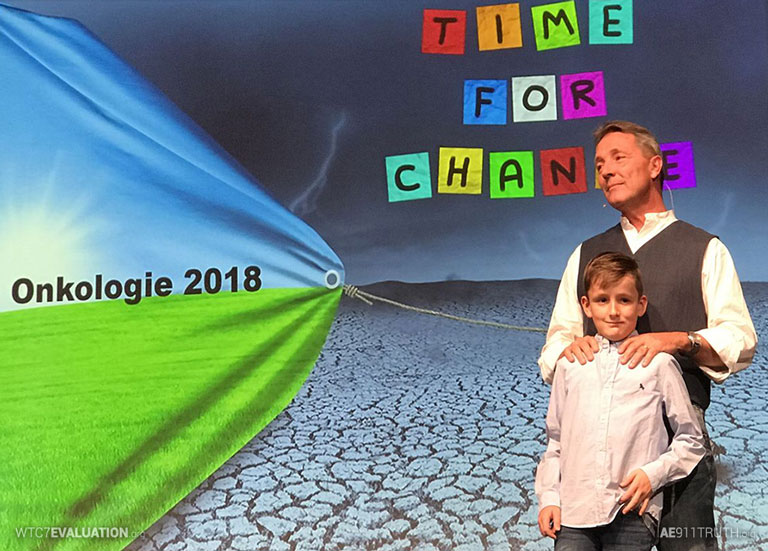 Time for Change: AE911Truth Journeys to Switzerland for Gathering of Forward-Thinking Minds

This affair was a bit of a secret: To learn about it, you had to be invited to attend. The lucky guests, who numbered nearly 400, were treated to a first-class event in a packed venue.

Titled “Time for Change,” the November 3rd four-part symposium included world-class experts from four countries, each of them representing controversial, though diverse, fields. 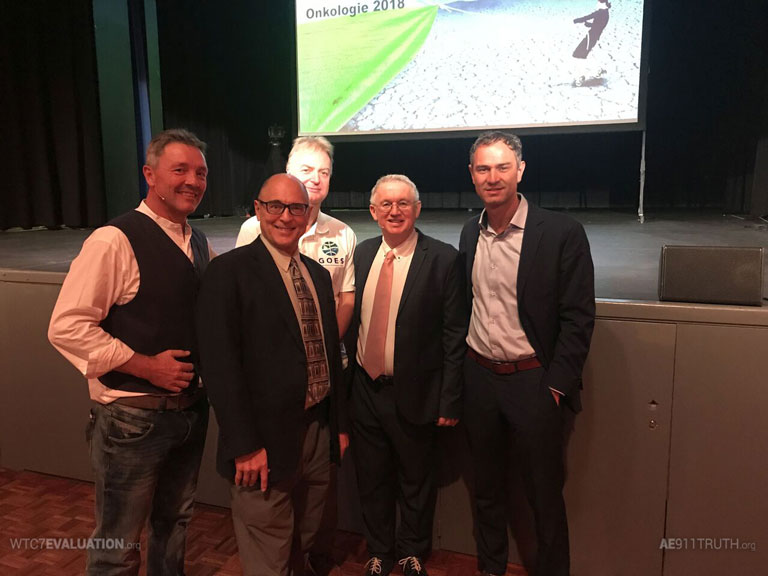 Dominik Graf, Richard Gage, Howard Dryden, Lother Hirneise, and Daniel Ganser gave the audience more than they could have hoped for in this eye-opening symposium.

Not only did the host, Dominik Graf, pull off the feat of bringing together four geographically spread-out speakers, but he also got almost 400 compadres, colleagues, and countrymen — some from as far away as Russia and Bangladesh — to show up at the Volkshaus Gallerysaal in Basel, the northernmost city in Switzerland. 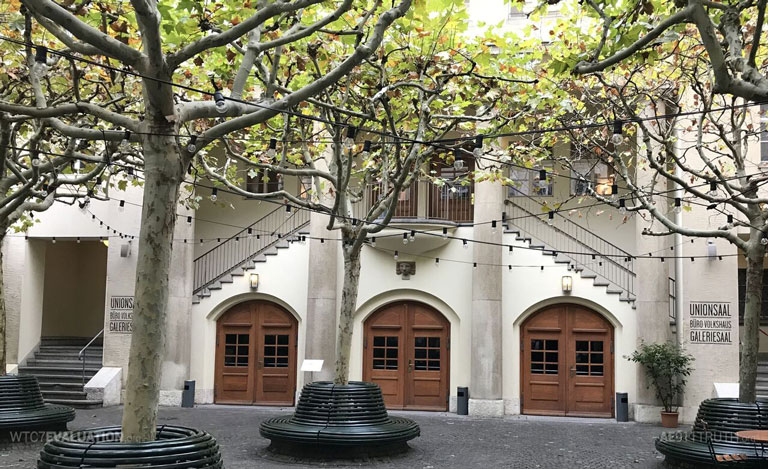 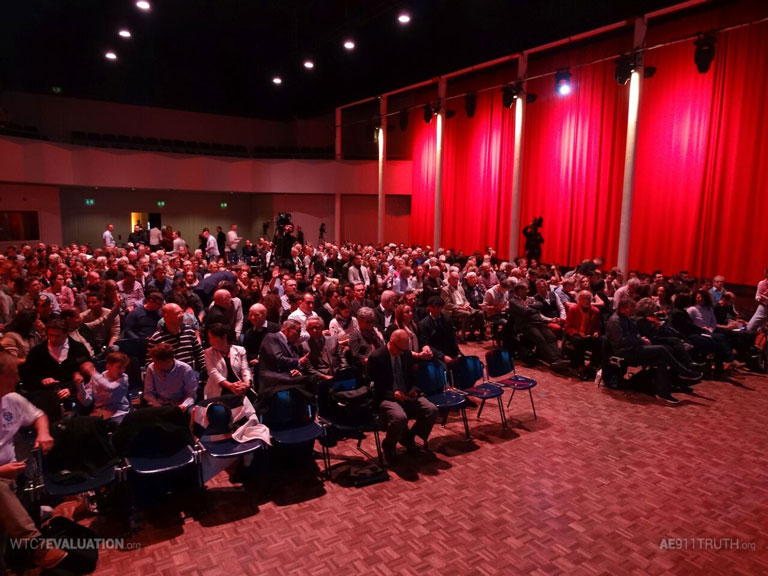 The packed house at the Volkshaus was electric on November 3, 2018.

Graf opened the evening by giving a heartrending account of his attempts to save his little boy’s life from a deadly disease. After battling with traditional medical experts and finding in their methods no help for his son, he finally ditched them and turned to the 3E Centre, which offers an alternative program for beating cancer championed by Lothar Hirneise — one of the evening's four speakers. 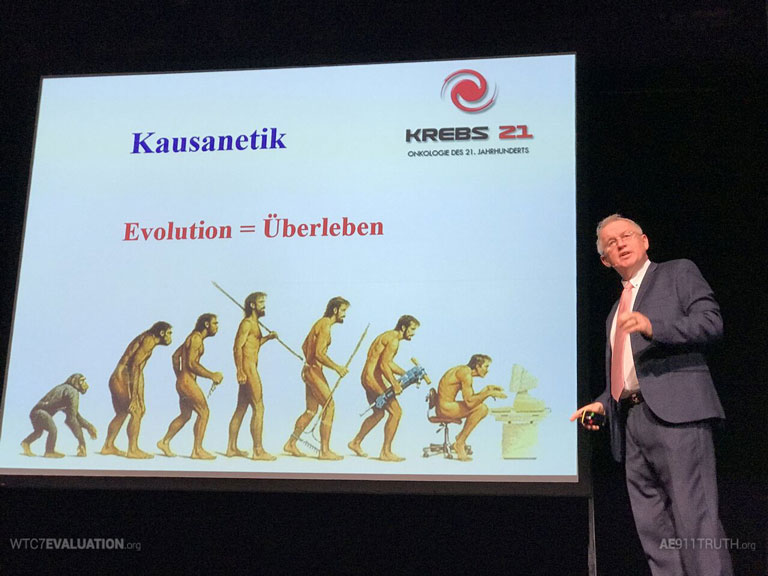 Lothar Hirneise was the former research director of the National Foundation for Alternative Medicine in Washington, D.C., and is now at the 3E Centre in Remshalden-Buoch, Germany (www.3E-Centre.com), where doctors regard a tumor as the body’s attempt to heal itself.

Meeting Hirneise did more than help Graf’s boy, who is now thankfully free of cancer. Graf shared with the audience how learning about alternatives to Western medicine also launched, in cascading domino-like fashion, his personal awakening out of many traditional belief systems he had been unconsciously assimilating since his youth.

A newfound urge to learn the oft-hidden truth about every issue and historical event imaginable led Graf to attend a lecture by a fiery history professor named Daniele Ganser, author of NATO Geheimarmeen in Europa (NATO’s Secret Armies), Europa im Erdölrausch (European Petroleum), and Illegale Kriege (Illegal Wars) and founder of the Swiss Institute for Peace and Energy Research. 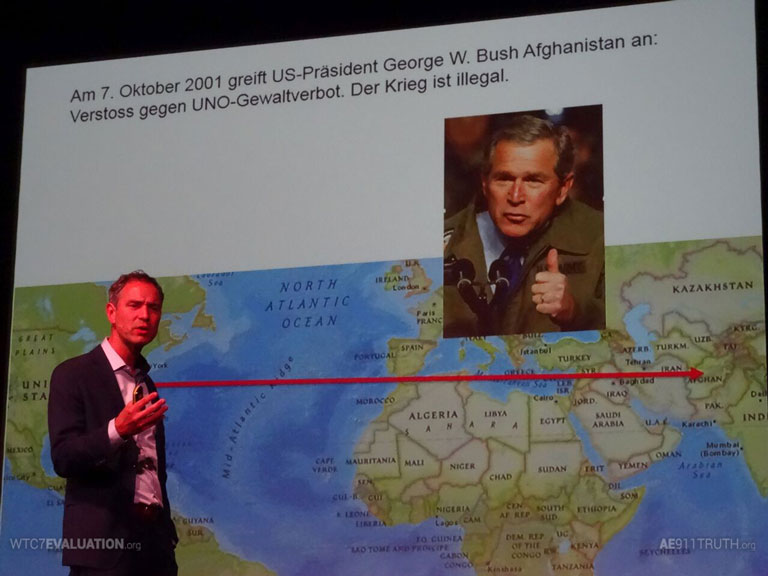 The outspoken Ganser is admired in the European alternative news community and in the worldwide 9/11 Truth movement for being one of those rarities who nobly sacrificed his secure university teaching position rather than toe the official line. Of all his YouTube videos, which have been viewed a total of seven million times on various channels, Ganser’s TEDxDanubia talk, given in Budapest in 2016, most exemplifies his Basel presentation. In both, he lured an unwitting audience right into the World Trade Center Building 7 trap. It was his way of setting up viewers for a classic 9/11 Truth reality check.

And that, appropriately, is where Richard Gage stepped in, took the microphone, and began his Basel talk. Gage started off by explaining the continuing importance of understanding the cataclysmic event that rocked the world 17 years ago.

“We’re not just talking about buildings here!” he said. “The events of 9/11 reshaped our foreign policy and resulting debt in the national economy – as well as decimating our civil liberties. We invaded two countries, where we are still engaged in the longest wars in our history. We killed more than two million people.

“We are engaged in a $5 trillion war on terror. Any of us can be arrested and imprisoned without a right to lawyer, a trial, a jury. We can be tortured and even assassinated. It all started with 9/11! And, most specifically, it started with the catastrophic destruction and loss of life at the World Trade Center. If there is any question about what really happened there, then shouldn’t we exhaust all means of finding the truth?” 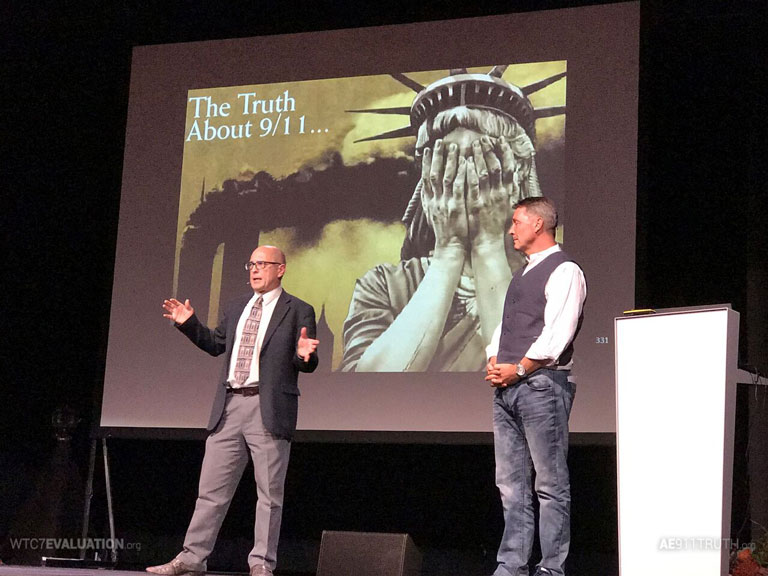 Gage determined, by a show of hands, that about one-fourth of the attendees believed the official story before his talk began. Another half of the audience — some 200 guests — indicated they were unsure of whether the US government was telling the truth. The final fourth confirmed that they were already aware of the evidence that the World Trade Center was brought down with explosives, and they agreed that a new investigation is necessary. By the end of Gage’s talk, only one person attested, by his raised hand, that he still believed the official story, while a couple of dozen folks indicated that they remained unsure.

The lone holdout was privately asked to share his thoughts. “Occam’s razor” was all he said, referring to the principle that the simplest theory among competing theories is the one most likely to be right. True, the official story is simple on the face of it: A group of hijackers flew two commercial airplanes into the Twin Towers and they fell due to the jet impacts and the incredibly hot jet fuel fires.

Simple, that is, until one actually looks at the evidence and easily determines that: (1) The Twin Towers could not have possibly failed in the manner the government attempted to show they did, and (2) there is ample forensic evidence and eyewitness testimony proving the intentional controlled demolition of not just the Twin Towers but also of Building 7 (which was not hit by a plane but which imploded in seven seconds later that afternoon). 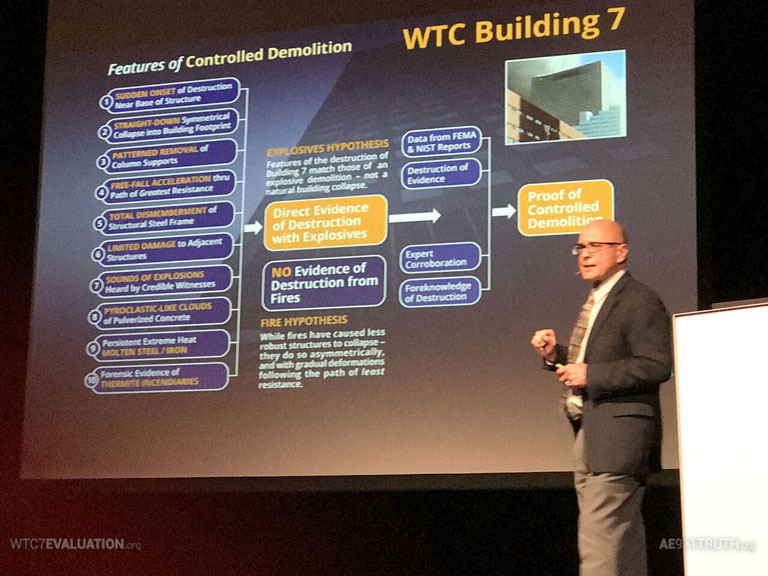 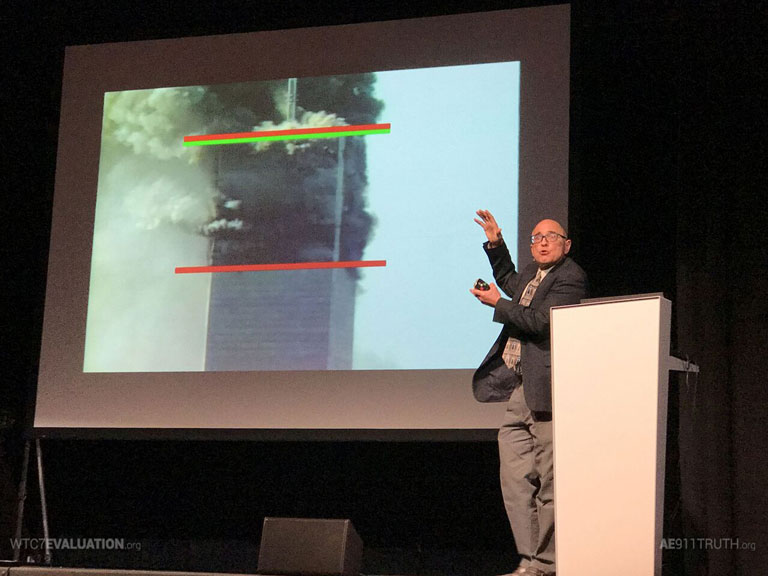 After Gage finished cataloguing all the signs pointing to explosives and incendiaries having been planted in all three buildings, the audience seemed stunned by the overwhelming quantity and irrefutable nature of the evidence he laid out. They leveled some thoughtful questions at Gage: “Why would the perpetrators have done this?” and “How could they set up all those explosives?” were among the queries.

While the professionally edited video of the November 3rd symposium in Basel is yet to come, readers can become more familiar with the AE911Truth presentation by watching the above video, taken at Delft/Amsterdam in the Netherlands.

Gage says it was satisfying to realize that most of the questions acknowledged the veracity of the evidence and revealed a conviction on the part of attendees that we must discover the full truth. But he also admits that, despite his best attempt to answer each question, neither he nor the rest of the professionals at AE911Truth have all the answers.

The fact is, the organization is comprised of architects and engineers who are engaged in a forensic study of buildings and the remains of buildings — not in a criminal investigation. The latter job should have been undertaken by legislative, judicial, and executive officials, not to mention by the watchdogs within the mainstream media, Gage says. Yet all of them, he reflects, have shirked their duty.

And though there are a fair number of independent researchers, building experts, and scientists who are doing their utmost to expose what actually happened at the World Trade Center on 9/11, these unofficial individuals and organizations don’t yet have the full attention of the world’s citizens nor the resources or positioning to gain their attention.

Thus, we present what we do know wherever we can, including at events like the one in Basel, to people who will listen and pass along what they’ve learned to others. We hope that you, our readers, will also share this information with all of your colleagues, friends, relatives, and representatives in the federal government.

Our resources are available to you in the Evidence section of our website or in our online store. Our Project Due Diligence team of engineers has created a presentation critiquing the NIST reports that you can pass along to engineering professionals in your community. Our Bobby McIlvaine World Trade Center Investigation Act empowers you to lobby your elected officials to open a new investigation in Congress. And our critical work needs your volunteer support if you have time to help us. In other words, you, too, can be a Dominik Graf and bring AE911Truth to your community — live or virtually.

We thank Dominik wholeheartedly for bringing us to Switzerland to make a difference once again in Europe! Similarly, we thank all of you, our supporters, for everything you have done and will be doing in the future to bring attention to the unresolved case of 9/11. We vow to never let it become a cold case.