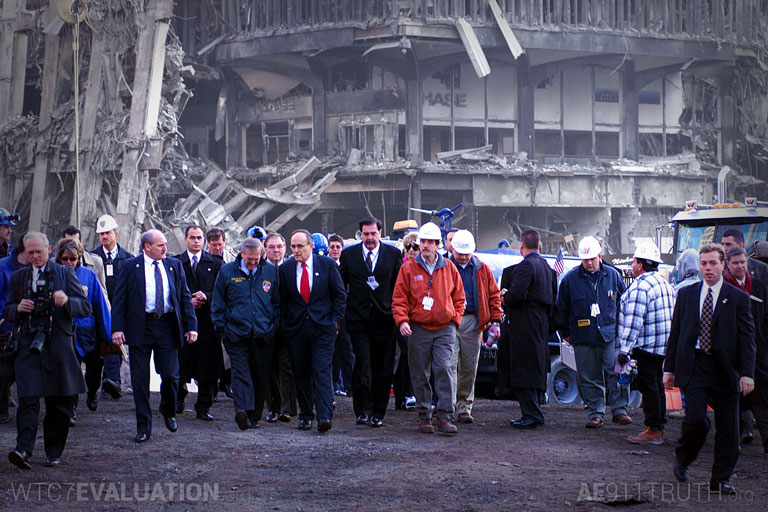 Today, the Lawyers’ Committee for 9/11 Inquiry — with whom AE911Truth has partnered in our ongoing Grand Jury Investigation Project — announced the filing of a “petition supplement” naming persons who may have information material to the federal grand jury investigation of the World Trade Center’s explosive demolition on September 11, 2001.

The 33-page document contains 15 different categories of persons who may have information material to the investigation, including contractors and security companies that had access to the WTC Towers before 9/11, persons and entities who benefited financially from the WTC demolitions, and persons arrested after being observed celebrating the WTC attacks.

A names-redacted version of the petition supplement, which was filed with the U.S. Attorney for the Southern District of New York on February 14, 2019, has been made available to the public. The un-redacted version filed with the U.S. Attorney today will remain undisclosed in the interest of maintaining the secrecy, security, and integrity of the grand jury proceeding.

AE911Truth is pleased to share the press release issued by the Lawyers’ Committee earlier today along with the Lawyers’ cover letter to the U.S. Attorney and the names-redacted petition supplement. Our sincere thanks go out to the nearly 2,000 dedicated activists who have contributed since the launch of the Grand Jury Investigation Project and helped make this action possible.

LAWYERS GROUP FILES PETITION SUPPLEMENT WITH U.S. ATTORNEY ON PERSONS WHO MAY HAVE INFORMATION MATERIAL TO 9/11 GRAND JURY INVESTIGATION

The Lawyers’ Committee for 9/11 Inquiry, a nonprofit public interest organization, hereby announces its filing with the U.S. Attorney for the Southern District of New York of an important Petition Supplement regarding persons who may have information material to 9/11-related crimes previously reported to the U.S. Attorney. In April and July of last year, the Lawyers’ Committee filed a Petition and an Amended Petition demanding that the U.S. Attorney, pursuant to its duty under a federal law, 18 U.S.C. § 3332, present to a Special Grand Jury extensive evidence of federal crimes relating to the destruction by explosive demolition of three World Trade Center Towers on September 11, 2001 that resulted in extensive loss of life.

On November 7, 2018, the U.S. Attorney replied to the Lawyers’ Committee acknowledging the original Petition and Amended Petition and agreeing to comply with 18 U.S.C. § 3332. This federal law states: “[a]ny such [United States] attorney receiving information concerning such an alleged offense from any other person shall, if requested by such other person, inform the [Special] grand jury of such alleged offense, the identity of such other person, and such attorney's action or recommendation.” 18 U.S.C. § 3332 further states that “(a) It shall be the duty of each such [special] grand jury impaneled within any judicial district to inquire into offenses against the criminal laws of the United States alleged to have been committed within that district.” The U.S. Attorney, however, did not state explicitly what actions would be taken to comply.

The Petition Supplement filed today, building on the prior-filed evidence of “what” crimes were committed during this tragedy, focuses on the “who,” “why,” and “how” of these yet-to-be prosecuted crimes. The thirty-three-page document presents detailed information regarding persons who may have information material to the federal Special Grand Jury’s investigation. This new Petition Supplement was addressed to U.S. Attorney for the Southern District of New York Geoffrey S. Berman as well as to Michael Ferrara and Ilan Graff, Chiefs, Terrorism and International Narcotics Unit.

The Lawyers’ Committee’s April 10th 52-page original Petition was accompanied by 57 exhibits and presented extensive evidence that explosives were used to destroy three WTC Towers on 9/11. That evidence included independent scientific laboratory analysis of WTC dust samples showing the presence of high-tech explosives and/or incendiaries; numerous first-hand reports by First Responders of seeing and hearing explosions at the World Trade Center on 9/11; expert analysis of seismic evidence that explosions occurred at the WTC towers on 9/11 both prior to the airplane impacts and prior to the building collapses; and expert analysis and testimony by architects, engineers, and scientists concluding that the rapid onset symmetrical near-free-fall acceleration collapse of these three WTC high rise buildings on 9/11 exhibited the key characteristics of controlled demolition. The July 30th Amended Petition included the same evidence but also addressed several additional federal crimes beyond the federal bombing crime addressed in the original Petition.

The Lawyers’ Committee concluded in the petitions that explosive and incendiary devices that had been preplaced at the WTC were detonated causing the complete collapse of the World Trade Center Twin Towers and Building 7 on 9/11, and the resulting tragic loss of life, and that “the evidence permits no other conclusion -- as a matter of science, as a matter of logic, and as a matter of law.” Both petitions and a names-redacted version of the just-filed Petition Supplement are available to the public on the Lawyers’ Committee’s webpage at www.lcfor911.org.

Attorney David Meiswinkle, President of the Lawyers’ Committee’s Board of Directors, stated: “This Petition Supplement is intended to assist the Special Grand Jury by providing a roadmap for a meaningful investigation into the yet-to-be-prosecuted 9/11 WTC crimes that the Lawyers’ Committee has reported and documented in our Petitions.”

Ed Asner, Executive Director of the Lawyers’ Committee, stated: “The filing of this important Supplement to the Lawyers’ Committee’s historic Petition to the U.S. Attorney represents a significant second step towards greater transparency and accountability regarding the tragic events of 9/11 at the World Trade Center.”

Attorney Mick Harrison, Litigation Director for the Lawyers’ Committee, stated: “We understand the need for secrecy relating to what occurs before the Special Grand Jury. However, the law does not preclude the U.S. Attorney from communicating with the Lawyers’ Committee regarding whether our Petition and Supplement have in fact been provided to the Special Grand Jury, and whether our attorneys and scientific experts will be allowed to present evidence. The U.S. Attorney has been silent on these important questions. We would prefer to believe the best based on actual communications, rather than having to assume the worst based on months of silence. Out of necessity, we have just advised the U.S. Attorney that we are considering filing a federal court petition under the federal mandamus statute, 28 U.S.C. § 1361, and the Administrative Procedures Act, 5 U.S.C. §§ 702, 706, to compel the U.S. Attorney to perform its duties under 18 U.S.C. § 3332. We would prefer to collaborate with, rather than bring legal action against, the U.S. Attorney’s Office, but in order to do so, the U.S. Attorney will need to timely communicate with us.”

The Lawyers’ Committee for 9/11 Inquiry is a nonprofit, 501(c)(3) organization devoted to conducting investigations and public education in the public interest regarding matters related to the tragic events of September 11, 2001 and the circumstances leading up to and following those events, with a focus on government transparency and accountability regarding investigation and prosecution of those responsible for the crimes related to 9/11 (whether those responsible are foreign or domestic individuals, corporations, or government entities). The Amended Petition, exhibits, and names-redacted Petition Supplement filed with the U.S. Attorney for submission to the Special Grand Jury can be found at the Lawyers’ Committee’s website, www.lcfor911.org.