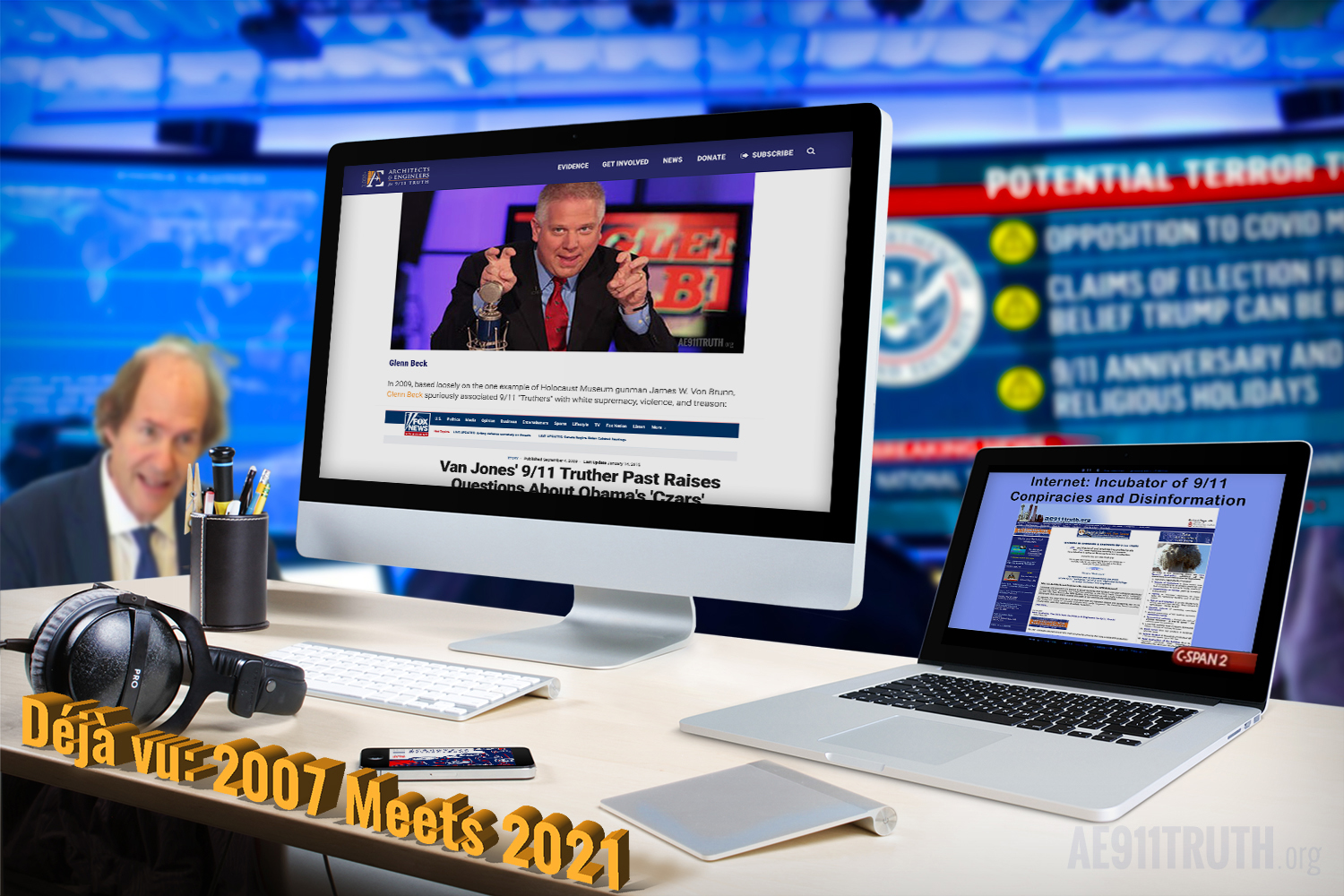 Sunstein and Beck Fire Shots Across Our Bow

Updated August, 2021. As we encroach the 20th Anniversary of the September 11th attacks, it appears we needed to add current "domestic threats" due to Homeland Security's need for new fearmongering.

Note: This article addresses issues that arguably lie outside AE911Truth's mission. We consider such a departure to be justified in this case, because the paper by Sunstein and Vermeule specifically mentioned as the targets of its advocated "infiltration," the 16% of Americans who responded to a Scripps-Howard Poll in 2006 that it was either very likely or somewhat likely that "the collapse of the twin towers in New York was aided by explosives secretly planted in the two buildings" (Conspiracy Theories, p. 2).

You know you're getting somewhere on an issue of paramount public importance when your opponents stop making fun of you and start describing you as a threat to the established order, and supporting interference with or the elimination of your First Amendment rights, and even accuse you of being a terrorist. 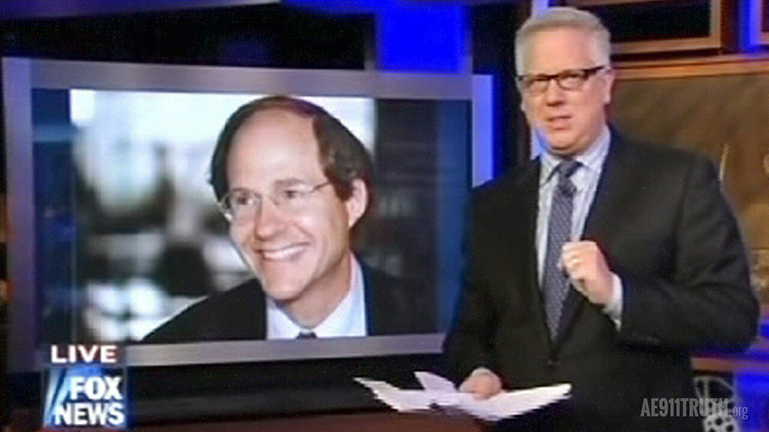 One of the first shots in the threat campaign was fired just over two years ago by Mark Weitzman of the Simon Wiesenthal Center (to which we responded). 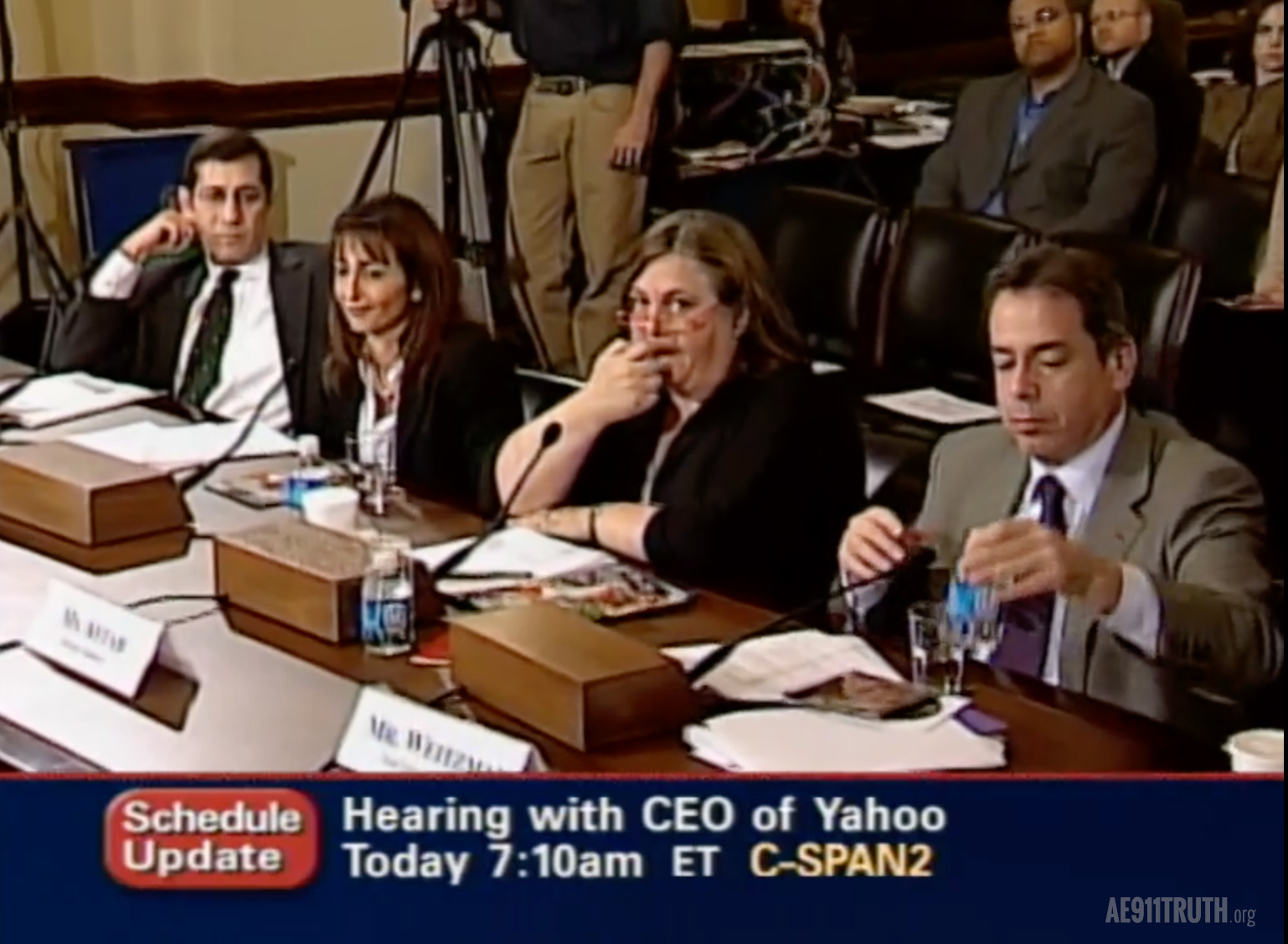 Testifying in November 2007 before a House subcommittee of the Homeland Security committee, Weitzman portrayed AE911Truth in what could be construed as part of a jihadist campaign in support of "violent radicalization," " homegrown terrorism," and "ideologically based violence." The words Weitzman intoned as our homepage appeared in his presentation – "Soon, soon, soon, the attack on Manhattan" – have never appeared on our website. Alas, anyone testifying before Congress has absolute immunity against being sued for defamation. All of this is a sour irony, given Weitzman's work as an "anti-defamation" activist.

In early 2008, Cass Sunstein and Adrian Vermeule published a preliminary draft of a Harvard Law / University of Chicago Law working paper entitled "Conspiracy Theories". The paper has become "the talk of the town" in the 9/11 Truth community. The references at the end of this article are only a small sample of what's available through Internet search engines.

According to the abstract:

Those who subscribe to conspiracy theories may create serious risks, including risks of violence…

COINTELPRO, the FBI's 15-year Counter Intelligence Program initiated by FBI Director J. Edgar Hoover himself in 1956, illegally targeted a wide spectrum of citizen activist groups for infiltration and disruption. The openness of Sunstein and Vermeule's call for such a program to be resurrected supports what many in the 9/11 Truth movement have suspected for many years: that government money is being used to pay people, posing as "Truth" activists, to knowingly promote false information and "increase factionalism." 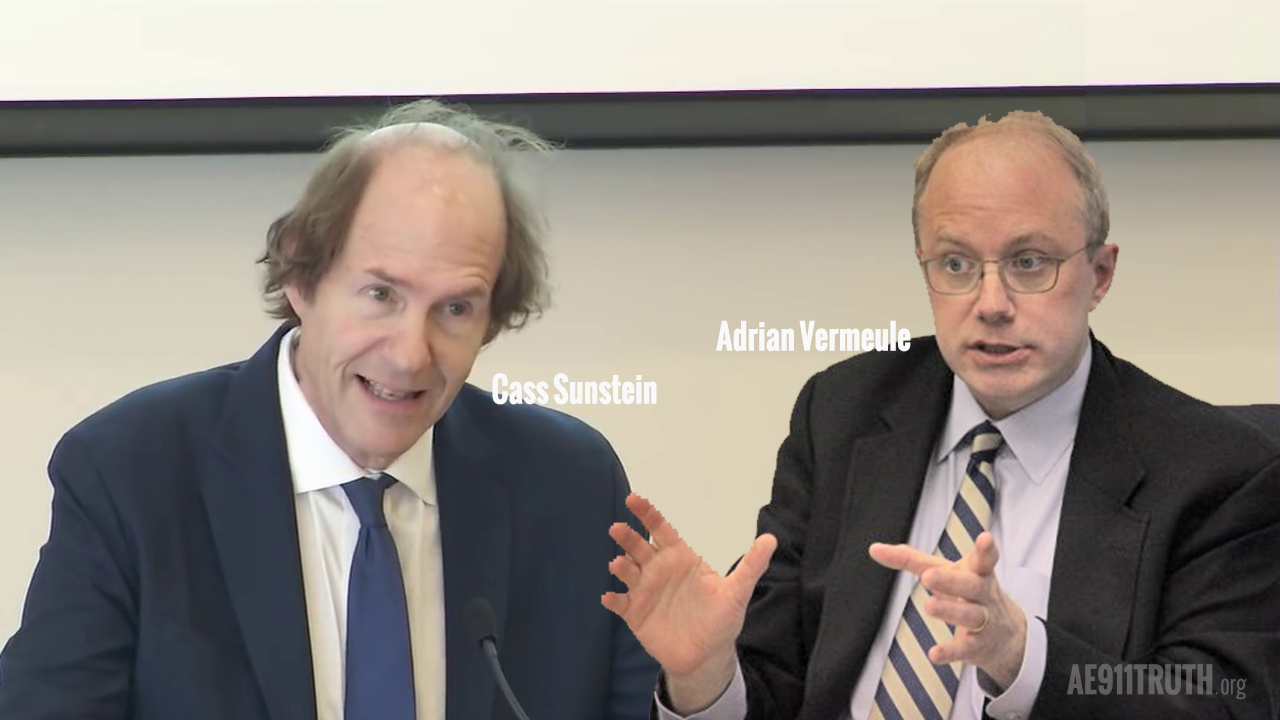 In the body of the paper, Sunstein and Vermeule waste no time explaining the danger of 9/11 alternative conspiracy theories:

The existence of both domestic and foreign conspiracy theories … is no trivial matter, posing real risks to the government's antiterrorism policies… [p. 3]

Even if only a small fraction of adherents to a particular conspiracy theory act on the basis of their beliefs, that small fraction may be enough to cause serious harms. Consider the Oklahoma City bombing, whose perpetrators shared a complex of conspiratorial beliefs about the federal government. Many who shared their beliefs did not act on them, but a few actors did, with terrifying consequences. James Fearon and others argue that technological change has driven down the costs of delivering attacks with weapons of mass destruction, to the point where even a small group can pose a significant threat. If so, and if only a tiny fraction of believers act on their beliefs, then as the total population with conspiratorial beliefs grows, it becomes nearly inevitable that action will ensue. [p. 17]

Thus, the absurd line of "logic": Truthers might have WMDs, or might get them someday! Therefore we must act decisively now!

In a different sense of "wasting no time," the authors do not mention any evidence cited by 9/11 skeptics in support of their beliefs. Where the correctness of the official story of 9/11 is not merely assumed as a backdrop, it is supported by fallacious arguments. One is a brief reductio ad absurdum suggesting that distrust in the official story of 9/11 would require an unreasonably wide and deep distrust of all the authorities that support the official story – as if people could not reasonably agree with authorities on many things, while disagreeing with them on a few.

According to the authors, those who reject the official account of 9/11 are simply uninformed, not (as a rule) crazy or stupid. The problem, according to these authors, are the various ways by which beliefs get erroneously adopted and retained, such as "crippled epistemologies," "conspiracy cascades," "group polarization," and "selection effects." For example:

Whenever a bad event has occurred, rumors and speculation are inevitable. Most people are not able to know, on the basis of personal or direct knowledge, why an airplane crashed, or why a leader was assassinated, or why a terrorist attack succeeded. In the aftermath of such an event, numerous speculations will be offered, and some of them will likely point to some kind of conspiracy. To some people, those speculations will seem plausible, perhaps because they provide a suitable outlet for outrage and blame, perhaps because the speculation fits well with other deeply rooted beliefs that they hold. Terrible events produce outrage, and when people are outraged, they are all the more likely to attribute those events to intentional action.

This is only one example of course, but to this author it was fascinating to see how much space could be spent in an academic paper, accepted for publication by respected institutions, which fleshes out various arguments that all boil down to ad hominems – and in which the arguments are being provided in support of a thesis that is never directly stated.

Cointelpro 101 from Freedom Archives on Vimeo.

The authors also present this somewhat strange explanation for the existence of so many 9/11 skeptics:

Perhaps this explanation is meant for some reason to apply only to foreign countries that we could all agree respect human rights and civil liberties far less than the United States traditionally has done. Whatever the intent, the authors avoid mentioning the obvious implication of their earlier review, which showed that 9/11 conspiracy theories different from the official one are widely held in the United States as well. Combining that with their causative statement above, the implication is that civil rights and civil liberties are dangerously low in the United States, leading to the "lack of multiple information sources" which the authors blame for the generation of "conspiracy theories" (always understood, without evidence, to be false). Yet, the range of possible government responses to the problem that they consider go even further than infiltration in the opposite direction for increasing civil liberties:

The most direct response to dangerous conspiracy theories [sic] is censorship. That response is unavailable in an open society, because it is inconsistent with principles of freedom of expression. We could imagine circumstances in which a conspiracy theory became so pervasive, and so dangerous, that censorship would be thinkable. (emphasis added)

After suitably stretching the boundaries of what is "imaginable," they step back from the brink:

But in an open society, the need for censorship would be correspondingly reduced. In any case censorship may well turn out to be self-defeating. The effort to censor the theory might well be taken as evidence that the theory is true, and censorship of speech is notoriously difficult. 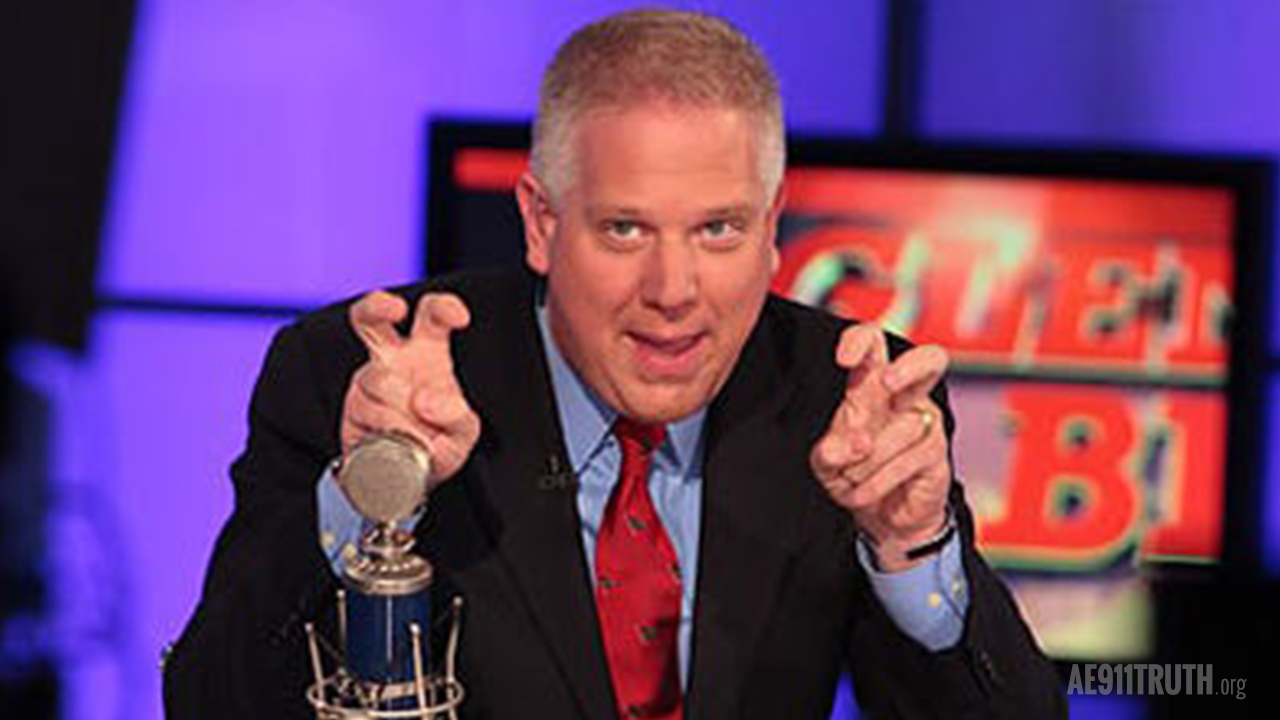 In 2009, based loosely on the one example of Holocaust Museum gunman James W. Von Brunn, Glenn Beck spuriously associated 9/11 "Truthers" with white supremacy, violence, and treason:

Just a few days ago, Beck repeated the association between "9/11 Truthers" and violence:

Now, here's why the president is in trouble: 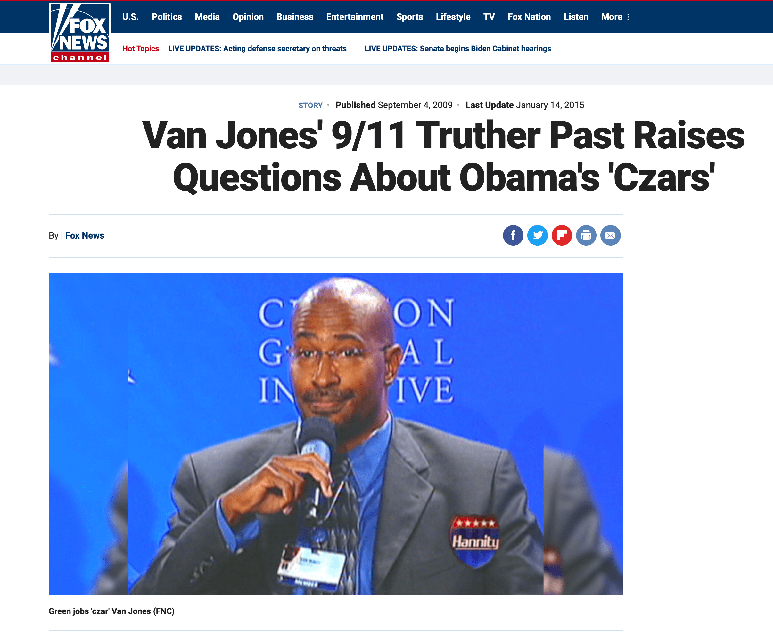 Do you think it's safe to have that individual around the president? Are you comfortable with that?

What Sunstein and Vermeule did for the ivory tower, Beck does for average-Joe Faux "conservatives." 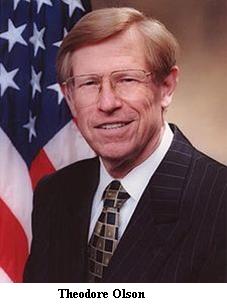 Avid students of 9/11 Truth will remember that Theodore (Ted) Olson, solicitor general under George W. Bush, was the original and apparently only source of the story that boxcutters had been used by the terrorists to take over Flight 77. According to David Ray Griffin's 9/11 Contradictions, Ted Olson has flip-flopped twice on the details, and his account is contradicted by FBI evidence presented in the Zacharias Moussaoui trial . Olson told the Supreme Court in 2002, "It's easy to imagine an infinite number of situations where the government might legitimately give out false information" (http://www.opednews.com/populum/diarypage.php?did=6837). And yet, one of the many thousands of laws that provide US and state governments with endless pretexts for locking people up is USC § 1001, known as the False Statements statute. This statute makes it a crime to lie to any federal official or agent, "even if the lie is harmless and does not interfere with an investigation." More irony: In a country where our government is supposed to be "of, by, and for the People," it is a crime for citizens to lie to their government, yet it is legal for the government to lie to its citizens.

In fact, it is apparently a career-enhancing move for highly placed people to call for such deception. Olson does not seem to have displeased his masters with his 2002 remark, having been seriously considered for high judgeships and the post of attorney general. Sunstein was just appointed by President Obama to head the White House Office of Information and Regulatory Affairs. And there seems no end in sight to Beck's "journalism" career at Fox, despite his attacks on the First Amendment rights of 9/11 activists and his split-personality remarks for and against various positions espoused by the libertarian Right.

Those who truly care about obtaining a real 9/11 investigation had better do whatever they are going to do to help make that happen, before those who run the Land of the Free make it any more difficult . We have been warned.

Speaking of being warned — January 2019 censorship threat from YouTube 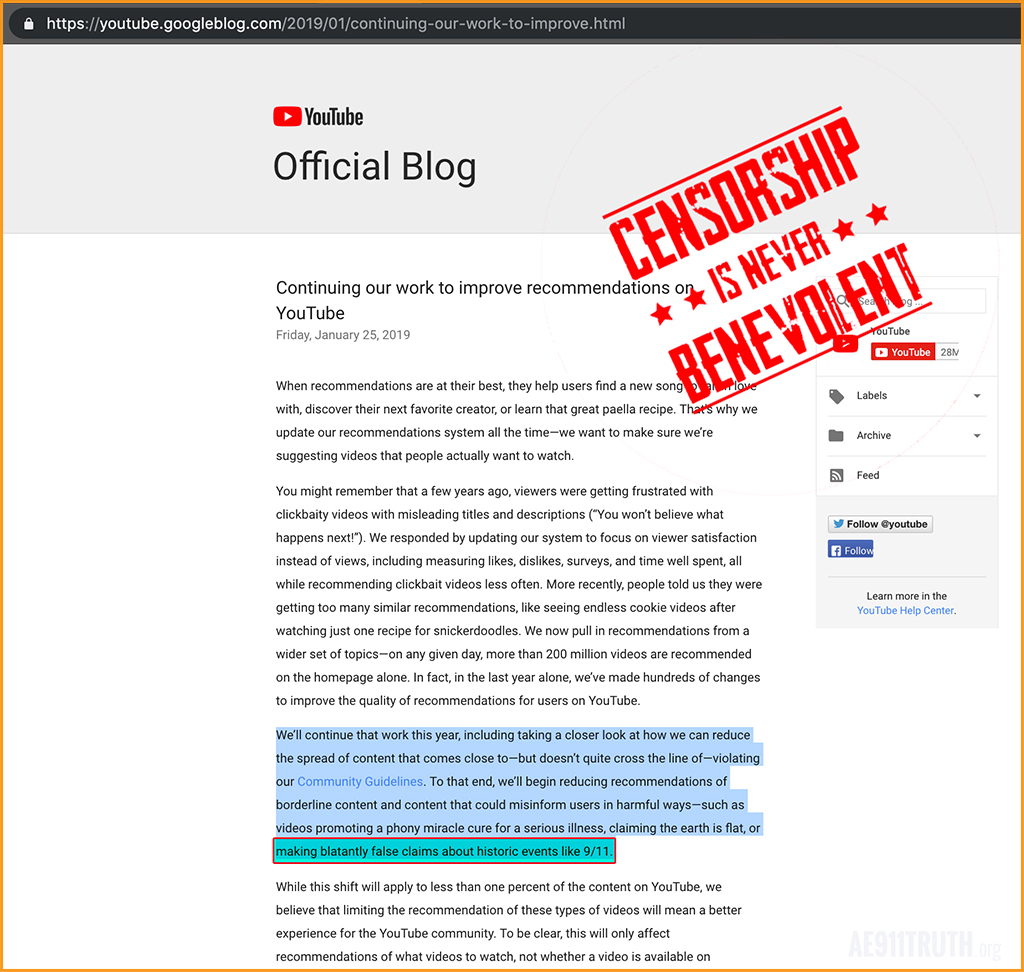 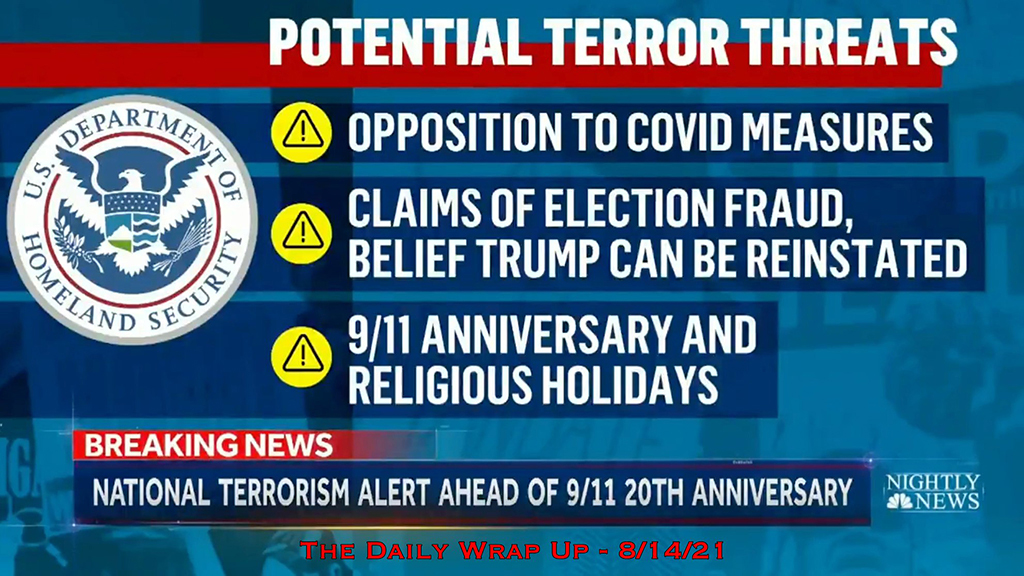 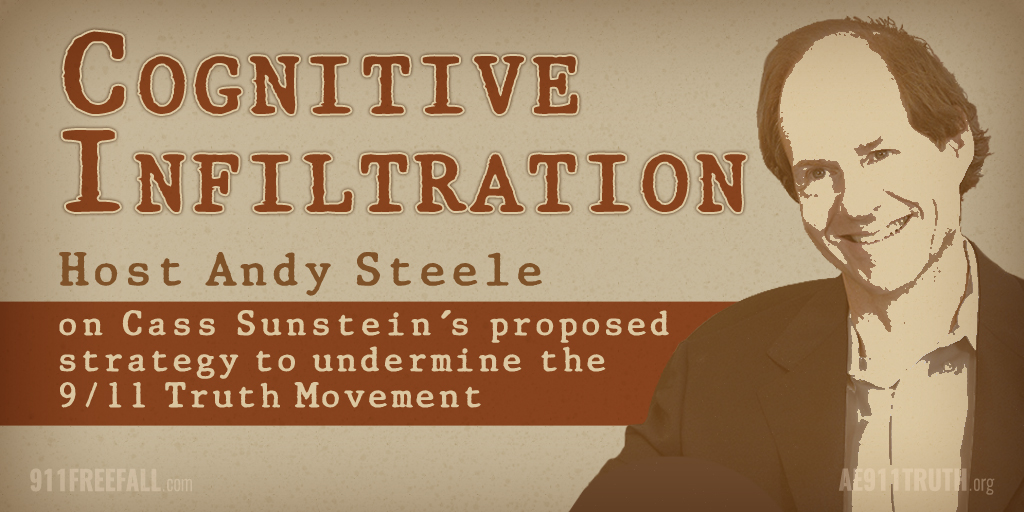 The Internet is making us stupid
http://www.salon.com/news/feature/2007/11/07/sunstein/