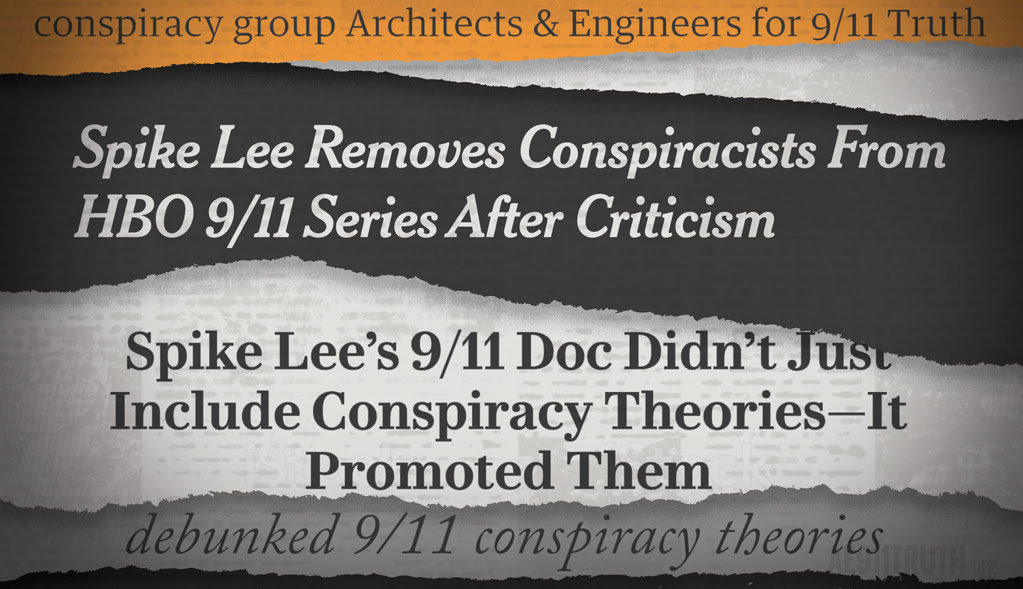 Your “conspiracy theorist” allegation is not founded upon reality: AE911Truth’s letter to the censorship-loving media

Roland Angle, the president and CEO of AE911Truth, yesterday wrote to seven journalists who helped pressure HBO and Spike Lee into removing the last half hour of his 9/11 docuseries or who subsequently cheered the censorship. We invite you to read Angle’s courteous but forceful letter, shown below.

We also encourage you to send your own letter to these journalists. Simply follow the instructions in last week’s action alert: “We dare the journalists who silenced the 9/11 family members in Spike Lee’s HBO series to write about The Unspeakable.”

As the president and CEO of Architects & Engineers for 9/11 Truth, I am writing to inform you that your allegation that our organization is a “conspiracy group” is not founded upon reality.

AE911Truth represents more than 3,500 technical professionals — architects, engineers, and other specialists in the building trades, many of whom are licensed by government agencies in jurisdictions throughout the world. These professionals are legally responsible for the safety of the members of the public who come into contact with structures and other facilities they design. The signatories to AE911Truth’s petition represent more than 50,000 years of collective experience in the practice of architecture, engineering, and related professions.

Your contention that we are “conspiracy theorists” would be amusing if it were not so tragically central to the perpetuation of profound ignorance regarding a matter of such supreme importance — namely, the unprecedented total destruction of three steel-framed skyscrapers on September 11, 2001, which claimed the lives of some 2,600 people and served as the pretext for two decades of endless war, the colossal expansion of the U.S. national security state, and the erosion of our civil liberties.

The evidence we have developed should be the subject of rigorous scientific debate by experts in our field. The tradition of debate lies at the heart of the scientific method and stretches back to the dawn of the age of science. But politics and fear of being ostracized are preventing such debate from happening. Through your actions, you are playing a crucial role in suppressing and censoring this very necessary debate.

The profession of journalism has its own traditions: At its best, it shines a light on areas of ignorance and brings scrutiny to actions by special interests that run counter to the public good.

We are standing up for our profession. I call upon you to stand up for yours.

As a film and television reporter, you might start by writing about the film we recently released called The Unspeakable, about the 9/11 families whom we are supporting in their pursuit of truth and justice. They — and the world — could use your assistance in that worthy pursuit.