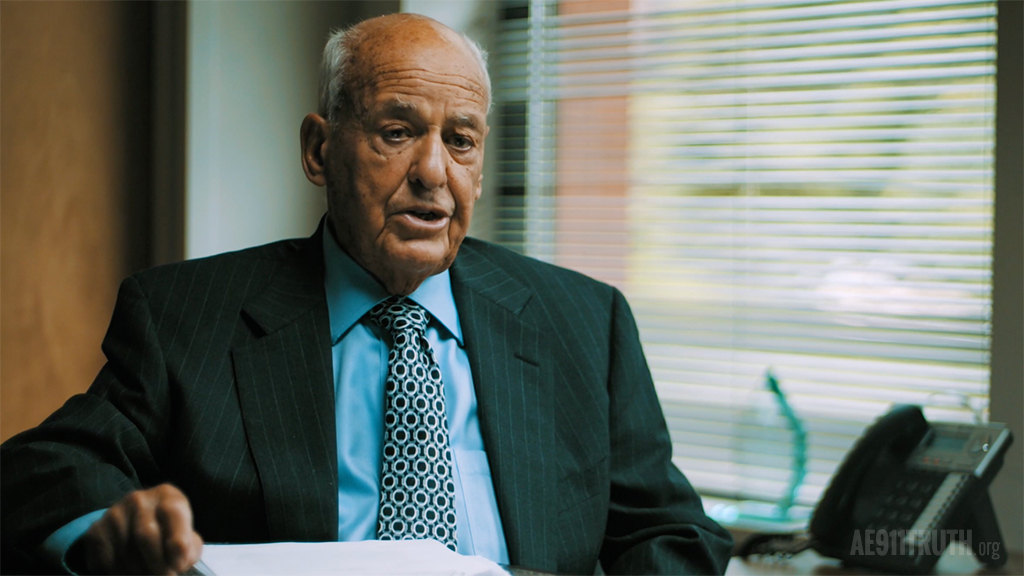 Cyril Wecht is not intimidated by power. He doesn’t shy away from taking unpopular positions or challenging official narratives.

While other public figures often calculate their statements and tailor their principles for personal gain, Wecht asks himself one thing: “What is the evidence telling me?”

In his more than six decades as a forensic pathologist, the now 90-year-old Wecht has been asked to weigh in on some of the most notorious deaths of our time. Among them: John F. Kennedy, Robert F. Kennedy, Martin Luther King, Elvis Presley, Sharon Tate, Nicole Brown Simpson, Vince Foster, Sunny von Bulow, Mary Jo Kopecne, JonBenet Ramsey, and Kurt Cobain.

Wecht appeared on the cover of The New York Times in 1972, revealing that President Kennedy’s brain had gone missing. He later testified before the House Select Committee on Assassinations and advised Oliver Stone on the film JFK. He is famous for his contention that the three shots Lee Harvey Oswald is alleged to have fired from the Texas School Book Depository could not have been discharged in the window of time available.

He lent his expertise to the documentary Soaked in Bleach, which alleges that Kurt Cobain did not commit suicide but was murdered, and his work on concussions was portrayed in the feature film Concussion, starring Will Smith.

When he is not working on high-profile, controversial cases, Wecht — who is also a lawyer, university professor, and medical-legal forensic science consultant — is busy performing and supervising autopsies (more than 61,000 over his career). He has served in the most distinguished positions in his field (currently clinical professor at the University of Pittsburgh and formerly president of the American Academy of Forensic Sciences and the American College of Legal Medicine). And he has written several books — notably, Cause of Death, Grave Secrets, and The Life and Deaths of Cyril Wecht: Memoirs of America’s Most Controversial Forensic Pathologist.

Now, thanks to Kelly David and Dylan Avery, producer and director respectively of the new Architects & Engineers for 9/11 Truth documentary The Unspeakable, Wecht is listening to what the evidence has to say about the deaths of approximately 2,600 people in New York City on September 11, 2001.

Cyril Wecht is interviewed in the latter part of AE911Truth’s new film The Unspeakable. This video is cued up to his first appearance in the film.

In his interview for the film, Wecht lends support to the position that the deaths of Bobby McIlvaine and Geoff Campbell — who were both killed at the World Trade Center on 9/11 — were caused by explosions, not by crushing from gravitational building collapses.

He also surmises that the deaths of more than 1,000 victims who have been identified through DNA from bone fragments and soft tissue — and by extension the 1,106 victims who, remarkably, have still not been identified — are also better explained by the explosive destruction of the buildings.

Wecht is now so intrigued by the case for controlled demolition that he is studying the issue in depth. He is in regular contact with David, who is AE911Truth’s chief operating officer, seeking material from the organization so that he has all of the available evidence. Once he has gathered enough information, he intends to give presentations on the subject, just as he did with the JFK assassination.

To have an expert of Wecht’s stature challenging the official story of what destroyed the WTC towers is a major development for the 9/11 Truth Movement.

Getting Wecht to agree to be in The Unspeakable took a leap of faith for David and Avery. As they were wrapping up shooting on the film in early August 2021, they still hoped to find a forensic pathologist to assess the evidence relating to the McIlvaine and Campbell deaths — and thus answer some of the questions the bereaved family members had been asking for years, as documented in the film.

Part of that evidence was contained in a paper titled “Human Identification Following the World Trade Center Disaster: Assessing Management Practices for Highly Fragmented and Commingled Human Remains.” Its author, Amy Mundorff, had herself barely survived the destruction of the World Trade Center while she was working for New York City’s Office of Chief Medical Examiner. Mundorff’s paper chronicles the OCME’s painstaking process of identifying 9/11 victims from the 21,905 human remains that were collected — a process that continues to this day. 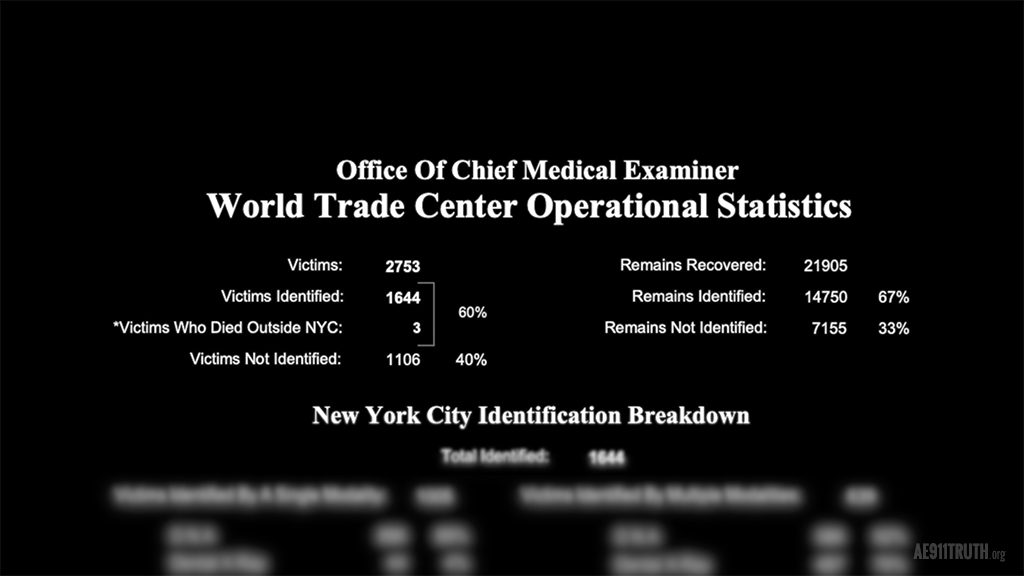 A report from the NYC Office of the Chief Medical Examiner on the number of human remains recovered from the WTC site and the number of victims identified, as presented in The Unspeakable.

After completing the last interviews with 9/11 family members in Philadelphia, the film crew was slated to head to New Jersey. David and Avery were discussing the forensic pathologist idea, and that’s when Wecht’s name came up.

They decided that sending him an email might not elicit the answer they were looking for. So they took a chance. Rather than heading north to New Jersey as planned, the crew drove six hours west to Pittsburgh without any idea of whether Wecht would agree to an on-camera interview. They arrived on a Sunday night and headed to Wecht’s office the following morning.

“I thought that if we showed up there, instead of just sending an email, we'd have a better chance of him saying yes,” David explains.

The gamble paid off, and the interview was shot in Wecht’s office two days later.

Without this interview, The Unspeakable would still have been a deeply moving film about the struggle of 9/11 families to expose the truth and to come to terms with their loss. But with Wecht involved, the film broke entirely new ground.

In his interview, Wecht is asked to comment, on camera, on three sets of information that he was seeing for the first time: documents related to the examination performed on Bobby McIlvaine, details of the death of Geoff Campbell, and the Mundorff paper, which describes the “commingling” of human remains. 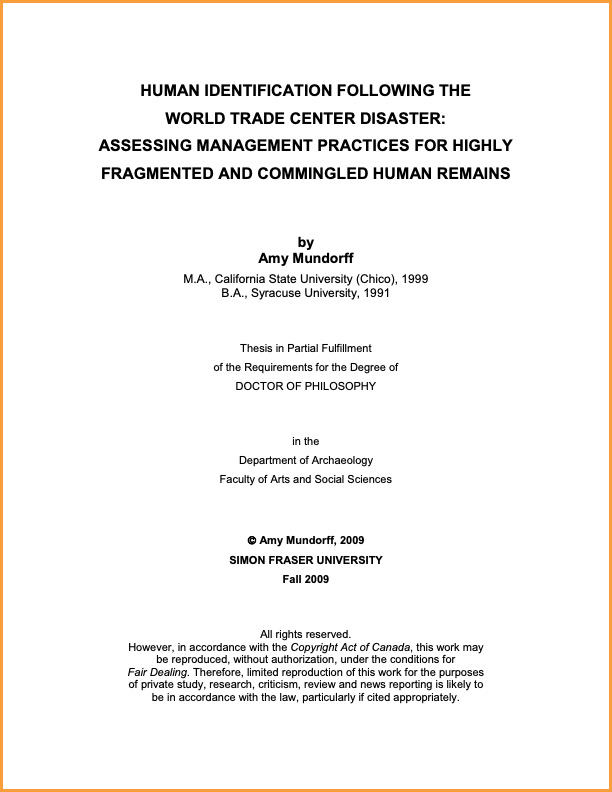 In her report, which Wecht quotes from on camera, Mundorff writes:

“Medical examiner personnel were initially caught off guard by the degree of destruction and fragmentation of the recovered human remains. . . . The tidal wave of debris that carried human remains blocks away, depositing them, in some cases, on top of buildings, also fused soft tissue to bone fragments from multiple individuals so completely that the remains appeared to be from the same individual. That's how commingled they were.”

Wecht remarks in the film that, for this commingling to take place, remains had to have been propelled with tremendous force, something that wouldn’t occur in a gravitational collapse.

“That’s not going to happen from crushing,” he says. “A building collapses, and two or more people are crushed. I can’t envision a situation in which the soft tissue of one victim is hurled with such force as to be embedded in, attached to, a bony fragment of another victim. I can’t envision that.”

In fact, this commingling phenomenon occurred with the remains of Geoff Campbell, whose brother Matt has been working for the last several years to open a new inquest into Geoff’s death so that evidence not considered originally — namely, the evidence for controlled demolition of the Twin Towers — can be examined as the possible cause of death. The decision on whether to grant the request rests with the attorney general for England and Wales. In the meantime, the Campbell family can only wait.

Although Geoff’s remains don’t play a large part in the case for opening a new inquest, Matt says he is happy that Wecht is supporting the controlled demolition hypothesis.

“I wonder if this is the first time a forensic pathologist has looked at this with an open mind,” Matt says.

Bob McIlvaine, Bobby’s father, learned the details of his son’s death only in 2006 or 2007, when he met for the first time with the doctor who performed the examination of Bobby’s body. The wounds described by the doctor indicated that Bobby had been hit by flying glass from some kind of massive blast. Most of Bobby’s head and face down to his lower jaw bone were missing, as was his right arm. He also had lacerations all over his chest from flying glass as well as fractures in his ankles and post-mortem burns.

When Wecht reviewed the Bobby McIlvaine documents on camera and learned that Bobby had apparently died as he was entering the lobby around the time the North Tower was struck, he had no trouble drawing a conclusion: “Then it had to be from some kind of explosive effect.”

It will be fascinating to see what Wecht does once he finishes examining all of the evidence. Based on his fearless and prolific career, one would expect that his research will be followed by action.