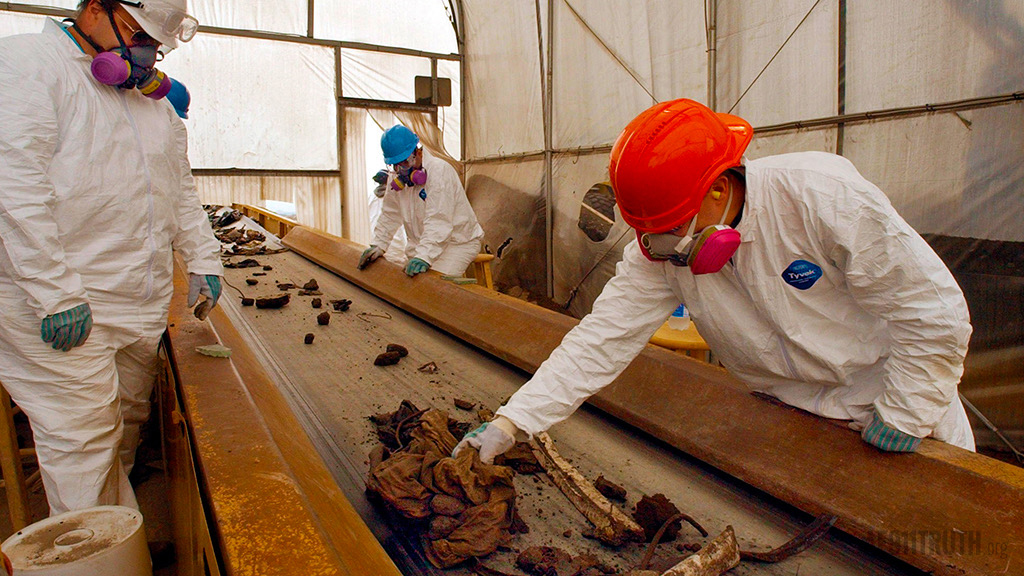 The clues have been there from the beginning, staring investigators in the face.

When the Twin Towers of the World Trade Center were destroyed on the morning of September 11, 2001, the bones of the victims, shattered into tiny fragments, were propelled outward with explosive force. Sometimes they became embedded in the soft tissue of other victims, causing a “commingling” that has made identifying the remains more difficult.

Fast forward 20 years: A staggering 40 percent of the people who died at the World Trade Center have still not been identified. Among the 60 percent who have, an average of eight fragments per person, usually comprising a small fraction of their body mass, have been found. Indeed, fewer than 100 intact bodies were pulled from the rubble. Of the 21,905 remains recovered, one-third have yet to be linked to a victim as the project to identify the dead, run by the New York City Office of the Chief Medical Examiner (OCME), enters its third decade.

Forensic anthropologist Amy Mundorff, who worked on the OCME project from 2001 to 2004, wrote a dissertation in 2009 titled “Human Identification Following the World Trade Center Disaster: Assessing Management Practices for Highly Fragmented and Commingled Human Remains.” In her detailed account of the work, Mundorff describes how “medical examiner personnel were initially caught off guard by the degree of destruction and fragmentation to the recovered human remains.” 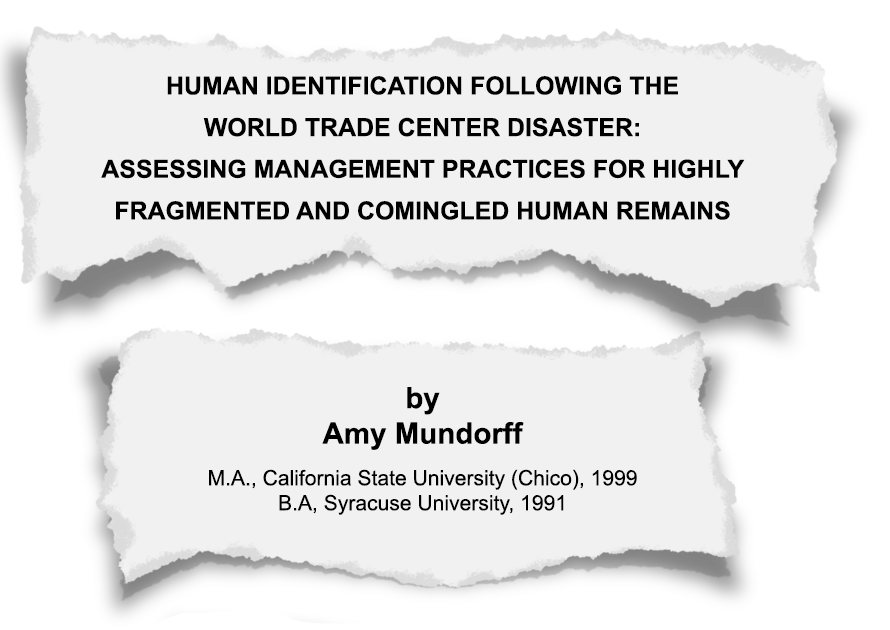 Unfortunately, instead of questioning whether such extreme fragmentation could be caused by a gravitational collapse, she and her colleagues apparently chalked it up to the immense scale of the towers: “They had no theoretical schema to comprehend the injuries a human body suffers in the collapse of a 110-story building.”

And yet, Mundorff’s description of the fragmentation and commingling of remains seems strikingly incompatible with the official narrative of a fire-induced collapse. She writes: “The explosive force that blew over fire trucks and peeled stone façades from buildings also disintegrated human bodies, turning bone into flying shrapnel, which became embedded in fragments of soft tissue from other individuals.”

Mundorff’s embrace of the official story is all the more remarkable since she experienced this “explosive force” herself when she and her team rushed to the scene. In a 2011 interview, she recounted what happened to her when the South Tower came down: “The tidal wave just kind of picked me up and blew me into a wall. . . . I kind of thought it was like a bomb exploding.”

Amy Mundorff recounts her experience on September 11, 2001: “The tidal wave just kind of picked me up and blew me into a wall.”

It’s possible that some in the OCME expressed doubts about what really happened — but even if they did, it likely would not have made any difference, since the OCME had already decided to accept the official explanation of the Twin Towers’ destruction. Mundorff reports that the OCME never investigated the cause of death of most WTC victims, because “the cause and manner of the victims’ deaths were not in question.” Instead, the investigation focused almost entirely on identifying the remains and attributed nearly all of the deaths simply to “blunt force trauma.”

As a forensic anthropologist, the first to be employed full time by the city, Mundorff is an expert in analyzing what human bones reveal about the cause of death. So it is difficult to understand why she so completely discounts what these bones reveal about how the WTC victims really died. As evidenced by the title of her dissertation, she sees the extreme fragmentation and commingling as a defining feature of the WTC remains. Yet her interpretation of what caused these phenomena stays safely within the boundaries of the official narrative. 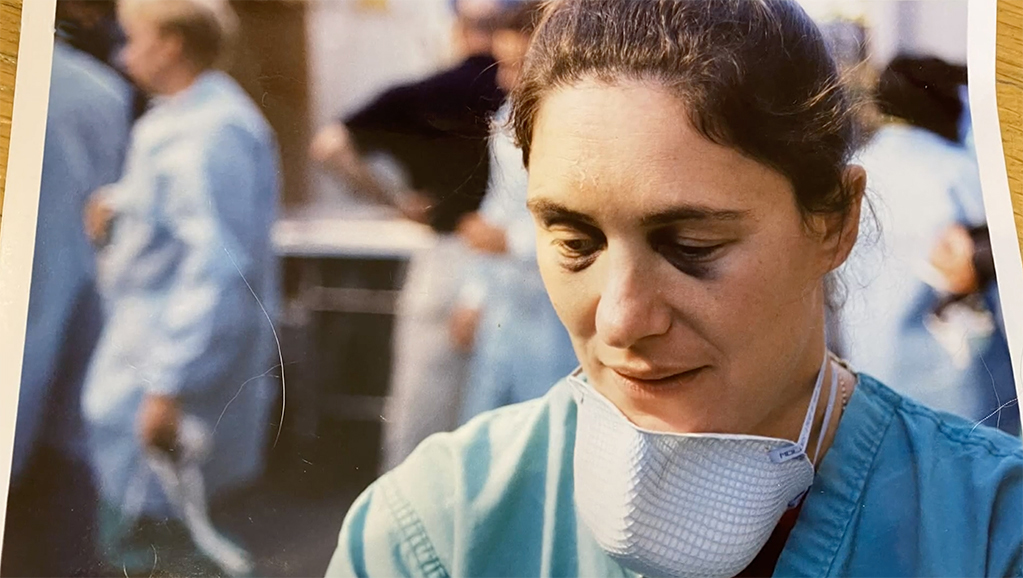 Contrast Mundorff’s response with that of world-famous forensic pathologist Cyril Wecht. Asked to comment on passages from Mundorff’s dissertation during his interview last August for the AE911Truth documentary The Unspeakable, he immediately recognized that bone fragments behaving like flying shrapnel points to an explosive event, not to the “crushing” that would occur in a gravitational collapse.

“How could that have happened, if you think about it, from crushing?” Wecht asked during the shooting of the film. “It might happen with a couple bodies, but it's not going to happen with a large number of bodies in that fashion.”

He added: “So that just goes to show you the explosive force. That’s not going to happen from crushing. A building collapses and two or more people are crushed. I can't envision a situation in which the soft tissue of one victim is hurled with such force as to become embedded into, attached to a bony fragment of another victim. I can’t envision that.”

Forensic pathologist Cyril Wecht gives his preliminary assessment of the WTC human remains in "The Unspeakable."

Unlike Mundorff and the OCME, Wecht does not take for granted that the official 9/11 narrative is true. His preliminary assessment was not politically driven but instead was informed by more than six decades of experience in his field.

In other words, he evaluated the evidence in the way the chief medical examiner should have.

In his interview, Wecht also said it would be hard to imagine a gravitational collapse resulting in so many victims not being accounted for.

“I personally have not experienced a situation in which someone was known to have been in the building, and no remains of any kind were found of that person.”

It is this very question that continues to trouble family members who are still seeking answers to what happened to their loved ones.

Kimberly Rex, whose father was killed in the North Tower and whose family received a few remains of his, has struggled to understand why his body all but disappeared.

In a powerful opinion piece published in the Washington Post around the 20th anniversary of 9/11 — titled “My father was killed on 9/11. I still struggle to understand how he just disappeared.” — Rex explains that what has haunted her more than anything is that her father didn't just die, he vanished.

“. . . the floor where he stood, the walls, the ceilings and the windows crumbled away into dust,” she wrote. “And the people inside disappeared.”

She added: “But I’ve never stopped struggling to understand how my father’s strong, stocky body just went away, disintegrated.”

Rex seems to understand, if only on an instinctive level, that something is wrong with the fire-induced collapse story we've been asked to believe by official sources. People don't vanish in a building collapse — certainly not 1,106 of them.

She is not alone in sensing this. Other victims’ families are also grappling with how the condition of the remains is inconsistent with the official explanation.

Among them is the Campbell family from the UK, who were also featured in The Unspeakable. For several years, Matt Campbell, whose brother Geoff died in the North Tower, has been leading his family’s efforts to get a new inquest into Geoff's death. To date, the Campbells have received two percent of Geoff's body. His first body part was identified in 2002 and the most recent in 2013.

In trying to understand why his brother’s body was so fragmented, Matt wrote to Mundorff in 2018 and asked whether she had considered the “detonation of explosives in the towers as the cause of death for the WTC victims, given the extreme fragmentation of the bodies and given the total, rapid, explosive destruction of the towers.”

Mundorff's response was sympathetic, but she repeated the same explanation the family has been given for the past two decades. She addressed Matt’s question this way:

“I am an anthropologist, not an explosive expert, so this isn’t my area of expertise. But I saw no material or other type of evidence to indicate there were explosives in the material I saw. The massive size and bulk of the towers coming down, with the concrete floors pancaking on top of each other, is likely responsible for the extreme force/trauma.”

Here is how Mundorff attempted to explain to Matt what could have created the explosive force that led to the commingling of so many remains:

“After the first tower came down, the second tower then came down blowing its debris wave ‘through’ the debris field of the first tower, mixing them together and further disturbing it and causing more damage, and moving remains to different places than their original deposition spot.”

Mundorff's dissertation offers another equally dubious scenario: Some of the commingling body parts could have been caused by the use of large digging machinery that “tore and mashed the decomposing bodies” during the excavation of the site in the months after 9/11.

When Cyril Wecht looked at the evidence, he could see its implications right away. He could see that the condition of the remains pointed to the explosive destruction of the Twin Towers and of everything and everyone inside them. Some family members also see this.

The OCME and Amy Mundorff, on the other hand, have had 20 years to see the evidence that is right in front of them, and they have not.