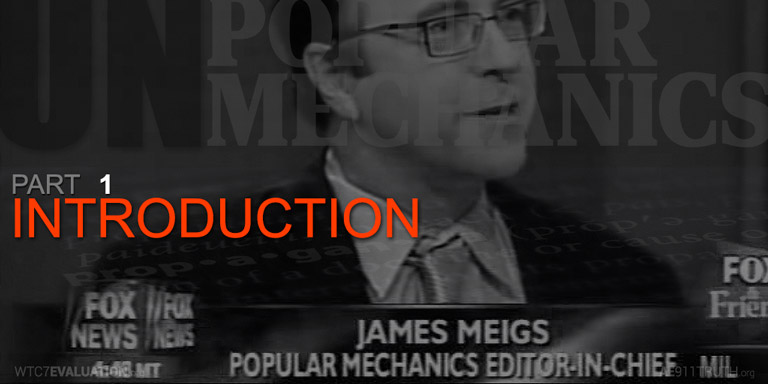 A decade has passed since the tragic events of September 11, 2001, and many people feel that we have still not had a real investigation into what really happened that day.

Indeed, a growing number of citizens believe that the probe into the destruction of the three World Trade Center skyscrapers by the National Institute for Standards and Technology (NIST) was at best incomplete and at worst fraudulent. These critics include the 1,600-plus architects and engineers who have signed the AE911Truth petition demanding an unbiased, independent investigation into the attacks.

By contrast, Popular Mechanics (PM) has been the primary cheerleader in the mainstream media defending the NIST reports ever since its book, Debunking 9/11 Myths: Why Conspiracy Theories Can't Stand Up To the Facts, was published in 2006.

For the ten-year anniversary of 9/11, PM put out a second version of its book, which it updated in an attempt to dismiss new findings that corroborate the controlled demolition hypothesis. The main revisions concern the collapse of the Twin Towers and World Trade Center 7.

Our 10-part series, which starts with Part 1 today, demonstrates that PM has still not adequately explained the numerous anomalies surrounding the collapse of the Twin Towers (WTC 1 and 2) and WTC 7—anomalies that prove the structures were destroyed with explosives.

The introduction to PM's chapter on the collapse of the Twin Towers briefly discusses the main theory put forward by members of the 9/11 Truth Movement: “The buildings were brought down intentionally—not by hijacked airplanes, but by government-planted bombs or a controlled demolition” (pg. 28).

PM then goes on to give a few examples of people promoting this theory. One of the people they cite is a Danish writer named Henrik Melvang, who, according to PM, “markets his book and video claiming the Apollo moon landings were a hoax” (pg. 28). This is obviously an attempt on PM's part to portray those who question the collapse of the Towers as conspiracy theorists who have irrational beliefs.

PM also cites Morgan Reynolds, the chief economist at the U.S. Department of Labor during President George Bush's first term, as someone who believes that the three WTC towers were destroyed through controlled demolition.

We must ask ourselves why PM would choose to cite these people as examples of those who question the cause of the collapse of the Towers. Why didn't the book cite anyone with experience in the fields of engineering and building construction? According to PM, it's because the 9/11 Truth Movement doesn't have any technical credentials. In its 2011 book, PM writes:

Though Reynolds and a handful of other skeptics cite academic credentials to lend credence to their views, not one of the leading conspiracy theorists has a background in engineering, construction, or related fields (pg. 28-29).

This statement is by far one of the most off-the-mark passages in PM's book. One need only look at what most consider the lead organization in the 9/11 Truth community, Architects & Engineers for 9/11 Truth, to see that there are currently over 1,600 professional architects and engineers with backgrounds in engineering, architecture, and building construction who question the destruction of the three WTC high-rises. How can PM possibly have omitted mention of more than a thousand experts who all contend that the Twin Towers and WTC 7 were brought down with explosives? In PM's entire 216-page book, there is not a single mention made of AE911Truth or its founder, architect Richard Gage.

When one looks back at their 2006 book, we can see that this exact same statement appears on the exact same pages. This fact shows how PM has decided to structure their new book: i.e., update it only where it benefits them. As we will see, this tactic is used more than once in PM's grossly flawed book. 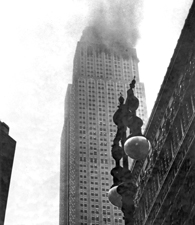 The debate over the airplane crash at the Empire State Building is irrelevant, because the design of the Twin Towers was far more robust than that of older high-rises.PM discusses the incident in 1945 when a B-25 bomber lost in the fog crashed into the side of the Empire State Building. They claim that “some conspiracy theorists point to [this incident] as proof that commercial planes hitting the World Trade Center could not bring down the towers” (pg. 29).

They also quote structural engineer Jon Magnusson, who says, “These structures look massive, but they're mostly air. They are air, punctuated with thin layers of concrete and steel” (pg. 30).

While it is true that the Towers were mostly empty space by volume, this is the case with any large skyscraper. The idea that they were in some way less structurally sound than the Empire State Building is contradicted by a variety of technical sources, including this telegram written by Richard Roth, partner at Emery Roth & Sons, which was the architectural firm that designed the Twin Towers:

THE STRUCTURAL ANALYSIS CARRIED OUT BY THE FIRM OF WORTHINGTON, SKILLING, HELLE & JACKSON IS THE MOST COMPLETE AND DETAILED OF ANY EVER MADE FOR ANY BUILDING STRUCTURE. THE PRELIMINARY CALCULATIONS ALONE COVER 1,200 PAGES AND INVOLVE OVER 100 DETAILED DRAWINGS.
...

4. BECAUSE OF ITS CONFIGURATION, WHICH IS ESSENTIALLY THAT OF A STEEL BEAM 209' DEEP, THE TOWERS ARE ACTUALLY FAR LESS DARING STRUCTURALLY THAN A CONVENTIONAL BUILDING SUCH AS THE EMPIRE STATE BUILDING WHERE THE SPINE OR BRACED AREA OF THE BUILDING IS FAR SMALLER IN RELATION TO ITS HEIGHT.
...

5. THE BUILDING AS DESIGNED IS SIXTEEN TIMES STIFFER THAN A CONVENTIONAL STRUCTURE. THE DESIGN CONCEPT IS SO SOUND THAT THE STRUCTURAL ENGINEER HAS BEEN ABLE TO BE ULTRA-CONSERVATIVE IN HIS DESIGN WITHOUT ADVERSELY AFFECTING THE ECONOMICS OF THE STRUCTURE.1

It is quite apparent that the Towers were extremely well built—and may have been even more structurally sound than the Empire State Building. Even supporters of the official conspiracy theory, such as Thomas Eager, praise the buildings' structural integrity: “The towers withstood the initial impact of the aircraft. . . . [T]he buildings had more than 1,000 times the mass of the aircraft. . . . [T]his ability to withstand the initial impact is hardly surprising” [Eagar and Musso, JOM, 53 (12) (2001), pp. 8-11].

Next PM quotes WTC assistant structural engineer Leslie Robertson's comment that the Towers were only designed to take the impact of a Boeing 707, but did not take into consideration the fires that would be produced by the jet fuel. After 9/11, Robertson noted, “I don't know if we considered the fire damage that [a plane strike] would cause” (pg. 31).

However, someone evidently did consider that problem, and that someone was John Skilling, the original WTC lead engineer. When interviewed in 1993, Skilling told the Seattle Times:

"We looked at every possible thing we could think of that could happen to the buildings, even to the extent of an airplane hitting the side. . . . Our analysis indicated the biggest problem would be the fact that all the fuel (from the airplane) would dump into the building. There would be a horrendous fire. A lot of people would be killed. [But] the building structure would still be there."2

Although PM mentions John Skilling briefly in their book, they make no mention of this statement from him. Apparently, PM felt no need to quote the lead WTC engineer on his views about the structural strength and stability of the Towers.

Interestingly, PM quotes a few sources who, after 9/11, claimed that the Towers were doomed once the planes impacted the buildings, yet virtually every engineering source quoted before 9/11 said just the opposite.3

The next section of PM's book deals mainly with the damage to the lobby floors of the Towers and mentions the assertion by the 9/11 Truth Movement that lobby destruction proves explosives were planted in the buildings. The argument that the PM book puts forward is different: It claims that the jet fuel from the planes traveled down through the elevator shafts and caused explosions that damaged the lobby. 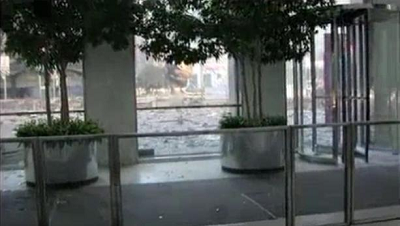 The walls and trees in the lobby of one of the Twin Towers show no evidence of being burned by a jet fuel fireball, which Popular Mechanics claims was the cause of an earlier explosion.

Although viewpoints differ within the 9/11 Truth Movement4 regarding the cause of these explosions, some features of the lobby damage indicate that they were not due to a fireball explosion from the jet fuel. For example, the white marble walls show no signs of being exposed to fire. Also, the plants next to the blown-out windows show no signs of having been burned.

And at least one explosives expert said he does not believe the damage was caused by the jet fuel traveling down the elevator shafts, based on the appearance of the lobby.5

Whether or not the lobby damage is indicative of explosives, however, is essentially irrelevant to the discussion of the Towers' demolitions, since the collapse sequence started above the plane impact zone, not at the lower levels. The lobby damage is not necessary to prove the Twin Towers were destroyed by controlled demolition; there are far more obvious indicators of demolition that will be discussed later in this report. The fact that PM claims that the jet fuel travelled down the elevator shafts is actually more damaging to their case, for it shows that not all of the fuel from the planes contributed to the fires that allegedly brought the Towers down.6

This section of PM's book also discusses the testimony of firefighter Louie Cacchioli, one of over one hundred first responders who said that there were bombs in the WTC. PM counters this by asserting that members of the 9/11 Truth Movement have taken his quotes out of context. Though Caccholi himself does not believe explosives were placed in the buildings, numerous quotes from firefighters and first responders strongly indicate that explosives were placed in the buildings.7

1 Quoted from: City in the Sky: The Rise and Fall of the World Trade Center by James Glanz and Eric Lipton, pg. 134-136

3 For more information on the pre-9/11 claims about the Towers' strength, see:
http://911research.wtc7.net/wtc/analysis/design.html

5 The following link provides arguments against the lobby damage being caused by a jet fuel fireball:
http://www.youtube.com/watch?v=EtEw4GA_hOg#t=11m24s

6 This paper provides detailed measurements for how much fuel actually remained on the impact floors, and shows that the amount in either Tower was actually quite small in relation to each Tower, much less a single floor:
http://www.journalof911studies.com/letters/e/VisualizationAidsWTCTowers.pdf