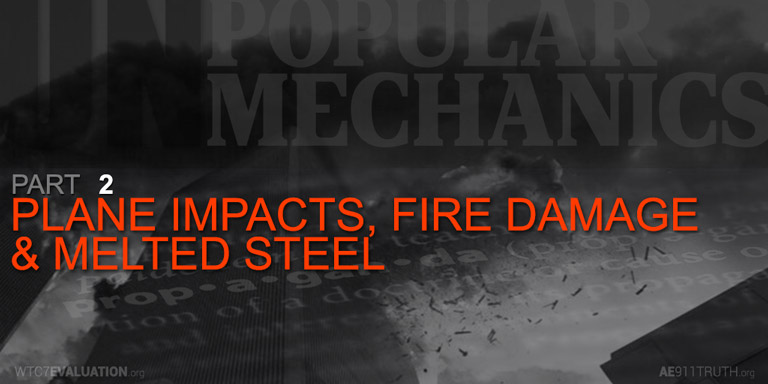 Popular Mechanics (PM) next turns to the issue of the plane impacts and fire damage and their roles in the WTC event.

Though PM acknowledges that the fires in the buildings could not have become hot enough to melt steel, the magazine nonetheless rehashes the argument from other defenders of the official story—namely, that the steel did not need to melt to cause collapse. According to PM, the steel only had to be weakened by the fires just enough to cause collapse.

PM argues that “When the planes hit the buildings and plowed into their centers, a large section of the exterior load-bearing columns as well as some crucial core columns were severed” (pg. 37-38). Though this may be true, the collapse of the Towers appears to have actually started at floors that had minimal structural damage.1

PM also discusses the theory from the National Institute of Standards and Technology (NIST) that “the impact stripped fireproofing insulation from the trusses that supported 80,000 square feet of floor space” (pg. 38).

This assertion, however, is greatly flawed, as noted by UL whistleblower Kevin Ryan:

[NIST's] test for fireproofing loss, never inserted in the draft reports, involved shooting a total of fifteen rounds from a shotgun at non-representative [structural steel] samples. . . . [I]t's not hard to see that these tests actually disproved their findings. One reason is that there is no evidence that a Boeing 767 could transform into any number of shotgun blasts. Nearly 100,000 blasts would be needed based on NIST's own damage estimates, and these would have to be directed in a very symmetrical fashion to strip the columns and floors from all sides. However, it is much more likely that the aircraft debris was a distribution of sizes from very large chunks to a few smaller ones, and that it was directed asymmetrically.2

Photo from Ground Zero shows a portion of the airplane fuselage, which contradicts the framework of NIST's “shotgun test” for fireproofing loss in the Twin Towers.Ryan's assertion that “. . . aircraft debris was a distribution of sizes from very large chunks to a few smaller ones” is well grounded, as photographs show that large portions of the planes exited the Towers, and eyewitnesses who escaped from the Towers reported seeing intact portions of the plane in the building.3

PM next goes on to discuss NIST's assertions that the fires in the buildings were sufficient to weaken the steel to the failure point. However, NIST's own tests show no evidence of this. While PM asserts in their book that “[steel] loses roughly 50 percent of its strength at approximately 600 degrees Celsius (1,100 Fahrenheit)” (pg. 38), NIST cites no evidence that the steel in the Towers sustained temperatures anywhere near this range. The highest temperatures NIST estimated for the steel samples was only 250 °C (482 °F), according to the metallographic paint tests they performed on WTC core column specimens.4

PM attempts to make a case that the combination of the aircraft impacts and the ensuing fires were sufficient to cause both of the structures to collapse.

Conspiracy theorists point to other high-rise fires, such as the one in 1991 at the 38-story Meridian Plaza hotel in Philadelphia, as proof that fire alone cannot bring down a skyscraper. And, in a sense, they are right: Fire alone did not bring down the towers (pg. 40).

It is important to note that the term “conspiracy theorists” is a derogatory term used here to discredit the forensic evidence of controlled demolition brought forward by technical professionals. The experts at AE911Truth do not speculate on possible theories regarding who brought down the WTC skyscrapers.

In the case of Building 7, the NIST report tells us that structural damage played no role in initiating the collapse of the building, and that its collapse was due to “normal office fires.”5 One then has to wonder why PM does not consider the 9/11 Truth Movement “in a sense right” about Building 7.

But that aside, it is important to quantify how the structural damage played a role in the collapse of the Towers. We previously noted that the collapse of the Towers started on floors with less damage than other floors. In the case of the North Tower, the collapse started at the 98th floor,6 which had the least amount of structural damage out of all the damaged floors.7 Not only that, but the upper section of the North Tower started to collapse on the side of the building opposite to where the plane impacted. 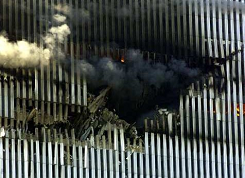 Impact zone of the North Tower (shown from the north side) 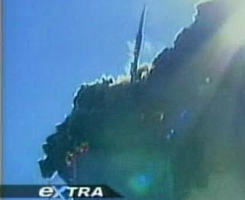 But PM notes other issues regarding the Towers' collapses, quoting structural engineer Jon Magnusson as saying:

[T]he impact struck out sprinklers and fireproofing, and the fire elevated the temperature of steel. Then you start to weaken the steel by heating it up (pg. 40).

As we have already seen, NIST has not provided evidence that demonstrates that the fires were hot enough to cause structural failure and collapse — nor that the fireproofing was widely dislodged. As for the sprinklers being “knocked out,” NIST doubts that the sprinklers would have done much to fight the fires.8

PM provides the One Meridian Plaza building as an example that members of the 9/11 Truth Movement cite to demonstrate that fires have never brought down a steel-framed high-rise, but they provide very little information on the specifics of the incident. The One Meridian Plaza building burned for 18 hours over eight floors. This is a vastly more severe fire than the fires that would have existed in the Towers. (Remember that NIST acknowledges that the jet fuel was burned up after only about 10 minutes.) What's more, the Meridian building was also constructed similarly to the Twin Towers and Building 7, having a core and perimeter “tube within a tube” columnar structural system.9 This was also the case for the First Interstate Bank, a 62-story building in California, which burned for nearly four hours but did not collapse.10

PM next addresses physics professor Dr. Steven Jones' findings regarding molten metal in the debris at Ground Zero, which Jones calls evidence of melted steel and/or iron. To counter his contention, PM's asserts that the fires in the debris piles cooked the steel and other metals to the point where they melted. They quote Jon Magnusson as saying:

When we're talking about the debris pile and the insulating effect, the fires down there are completely different than the factors [affecting the steel] in the building (pg. 41).

However, the idea that the molten metal could have somehow formed in the debris afterwards is actually addressed in Jones' paper:

The conditions at Ground Zero simply could not have produced these types of temperatures.13 However, the extreme heat in the piles is indeed consistent with thermitic reactions.14

In PM's next attempt to undermine the case for molten metal in the debris, they cite the analysis of Alan Pense, a professor of metallurgical engineering at Lehigh University. They quote Pense saying:

The photographs shown to support melting steel are, to me, either unconvincing . . . or show materials that appear to be other than steel. One of these photos appears to me to be mostly of glass with unmelted steel rods in it. Glass melts at much lower temperatures than steel (pg. 41).

First off, it is not clear from this statement which photograph Pense is referring to, though it's likely the popular “crane shot.” 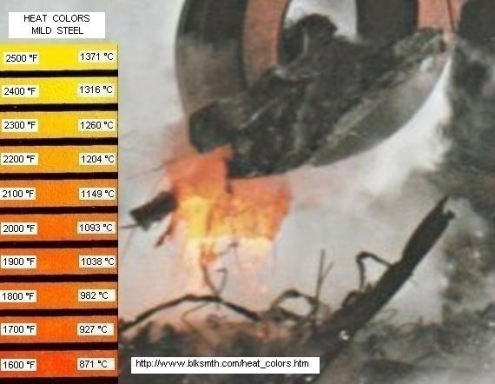 Regardless of whether the obvious molten material shown above is molten steel, iron, or even glass, its color indicates temperatures exceeding 2,300°F. The jet fuel and office fires in the Twin Towers never reached such temperatures.

Second, we have already seen that there were metals that were either melted or evaporated at temperatures well above the melting point of steel and iron. Third, even if the crane photo did show molten glass, it would still need to have been heated to extremely high temperatures, since glass does not begin to give off any visible light until it approaches temperatures of 2240 ºF.15

PM next takes issue with Steven Jones' claim that the molten metal can be accounted for by incendiaries that could have been used to destroy the buildings. They counter this claim by quoting Controlled Demolition, Inc. president Mark Loizeaux as saying the explosives used in demolitions do not produce molten metal, noting that the heat from the explosives would not last long. While this may be true for conventional explosives, the use of thermate and nanothermite based devices could certainly account for the molten metal. Molten iron is the main byproduct of a thermite reaction, and the reaction can produce extreme heat that lasts longer than conventional explosives. Nanothermite is a very high tech variation of thermite, and could account for all of these phenomena.16

In fact, both the USGS and RJ Lee, an environmental consulting firm, found ubiquitous, previously-molten iron microspheres in all of the WTC dust samples. These, like the thermite, can only be the result of temperatures reaching 2,800°F. Up to 6% of some of the dust samples recovered in the nearby skyscraper, the Deutsche Bank building, are composed of these iron spheres — most of which are only the size of the diameter of a human hair.

It is quite evident that PM has failed to explain away the extreme heat and molten metal that clearly existed at Ground Zero. They have also failed to show the temperatures inside the buildings were sufficient to cause collapse.

5 “The debris from WTC 1 caused structural damage to the southwest region of WTC 7—severing seven exterior columns—but this structural damage did not initiate the collapse. The fires initiated by the debris, rather than the structural damage that resulted from the impacts, initiated the building's collapse after the fires grew and spread to the northeast region after several hours.” Quoted from: http://www.nist.gov/el/disasterstudies/wtc/faqs_wtc7.cfm

6 According to NIST NCSTAR 1, pg. 87: “First exterior sign of downward movement of building at floor 98.”

7 Although it is true that the NIST report never specifically states that the 98th floor was the least damaged, the information provided in their report clearly demonstrates this. The 98th floor had only five perimeter columns severed, and one need only look through the table provided in NCSTAR 1-2, pg. 205 to see that NIST does not list floor 98 as having any of its core columns severed.

8 “Even if the automatic sprinklers had been operational, the sprinkler systems—which were installed in accordance with the prevailing fire safety code—were designed to suppress a fire that covered as much as 1,500 square feet on a given floor. This amount of coverage is capable of controlling almost all fires that are likely to occur in an office building. On Sept. 11, 2001, the jet-fuel ignited fires quickly spread over most of the 40,000 square feet on several floors in each tower. This created infernos that could not have been suppressed even by an undamaged sprinkler system, much less one that had been appreciably degraded.” Quoted from: http://www.nist.gov/public_affairs/factsheet/wtc_faqs_082006.cfm

11 Quoted from: Why Indeed Did the WTC Buildings Completely Collapse? by Dr. Steven Jones, pg. 5 http://www.journalof911studies.com/volume/200609/WhyIndeedDidtheWorldTradeCenterBuildingsCompletelyCollapse.pdf

13 For a detailed discussion of the high temperatures at Ground Zero, see:
http://911research.wtc7.net/papers/dreger/GroundZeroHeat2008_07_10.pdf

16 A detailed explanation of aluminothermic technology is given here:
http://911research.wtc7.net/wtc/analysis/theories/thermitetech.html