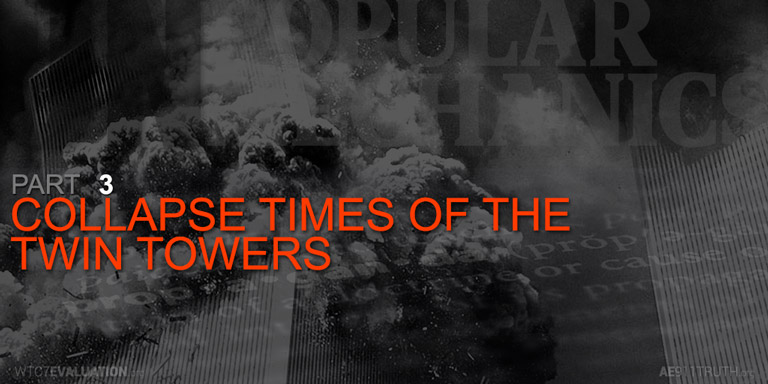 In Popular Mechanics' next section, they discuss the rate at which the Twin Towers were destroyed. PM begins by correctly pointing out that it is difficult to determine exactly how long it took each Tower to collapse, being that much of the destruction was blocked from view by the huge clouds of pulverized debris. However, it is quite evident that PM has again misrepresented the characteristics of the buildings' destruction. 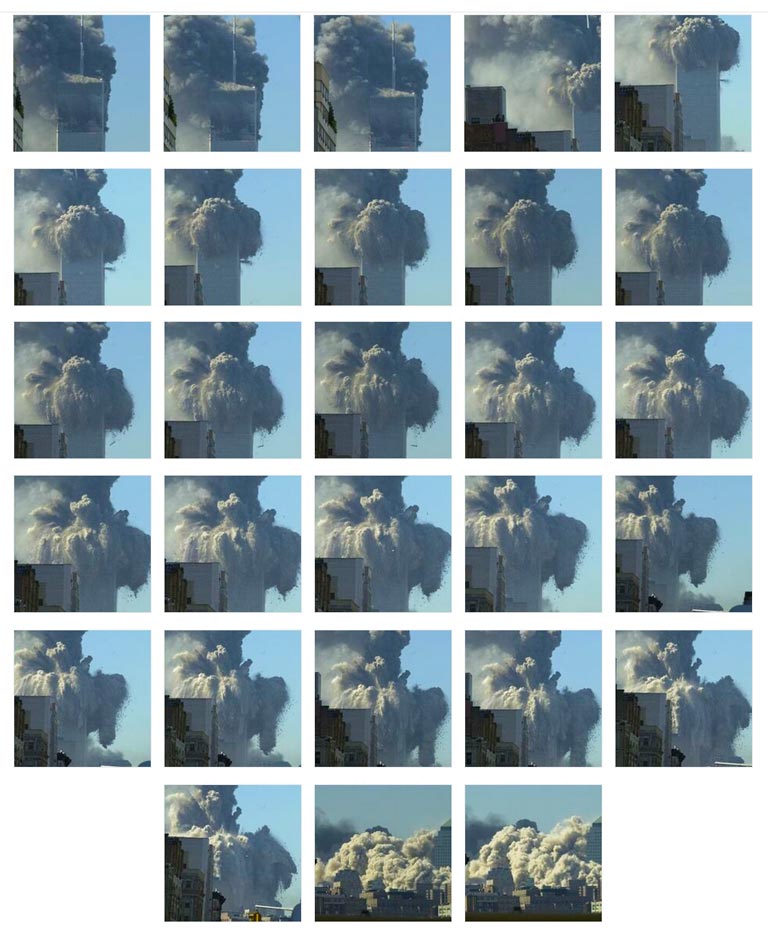 This series of photos taken quickly by Noah Murray shows the North Tower's rapid, explosive destruction from beginning to end.

PM continues by naming off a few people who have said the Twin Towers collapsed too quickly, but they evidently cherry-picked the individuals to quote on this topic.

For example, PM quotes talk show host Rosie O'Donnell as saying that the Towers each collapsed in nine seconds. They also quote 9/11 truth advocate Andrew Johnson as saying that the South and North Towers collapsed in eight seconds and ten seconds, respectively. However, neither of these individuals is an engineer or a scientist with relevant expertise who can give an expert opinion.

To be sure, PM does quote engineers that say the collapse times of the Towers were not remarkable at all, but omits the opinions of the hundreds of architects and engineers who reviewed the Towers' destruction and stated the collapses happened too quickly to have been caused by fire.

Here are just a few expert opinions that could have been included in PM's book:

Paul W. Mason is among over 1,600 credentialed architects and engineers who have challenged the official explanation for the Twin Towers' collapse.The collapse of the three WTC buildings would seem to defy the laws of mechanics, conservation of energy and known structural failure behavior. The case for the destruction of the three WTC buildings by means of "controlled demolition" is overwhelming. — Claude Robert Briscoe, civil engineer with 45+ years of experience1

There is no doubt that there were vast quantities of extra energy applied to the structures to achieve both rapid collapses and complete destruction of their components. This energy can realistically only have come from explosive charges. — Paul W. Mason, civil/structural engineer with 35 years of experience2

The speed at which the buildings fell implied that the central cores provided virtually no vertical resistance at any point during the collapses. — Joseph Testa, civil engineer3

The physics of momentum transfer in the collapse of the WTC buildings completely precludes the possibility that collapse at near free-fall speed could occur due to gravity alone. — Robert Tamaki, civil engineer4

The prevailing theory would have us believe that each of the Twin Towers inexplicably collapsed upon itself crushing all 287 massive columns on each floor while maintaining a near free-fall acceleration as if the 100,000, or more, tons of supporting structural-steel framework underneath didn't exist. — William Rice, P.E., Structural Engineer.

PM chose to omit opinions such as these from credentialed experts, preferring to quote only those engineers who support their overall premise.

PM initially argues that the complete collapses of the buildings took longer than 10-15 seconds by quoting NIST as saying that the portions of the cores of both Towers actually remained standing after the outer structures fell. However, as noted by mechanical engineer Gordon Ross, a dimensional analysis of the cores by 9/11 researcher Muhummad Colombo shows that the cores of the Towers were attacked first in the demolition:

The photograph by Aman Zafar (below), previously shown and commented upon, appears to show the lower core structure still upright after the floors and perimeter columns had collapsed to ground level. However, this is not the full story. Muhammad's analysis shows that the remaining core was too narrow to be the entire core, and was in fact, the inner 23 core columns. The 24 core columns which made up the outer perimeter of the core structure and to which the floors were connected are clearly absent from the photograph. Thus we can see that the outer core columns fell in the early stages of the collapse along with the floors and perimeter walls. For this to happen, the bracing which attaches these outer core columns, both to each other and to the inner core columns, would have to be severed and each column broken into sections.5 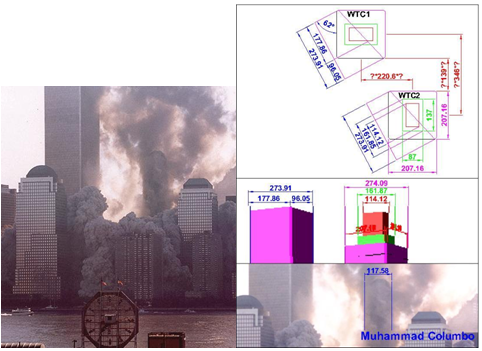 Analysis of images of the South Tower shows that key core columns were destroyed early on in the collapse, a phenomenon that can only be caused by explosives, contradicting PM's claims.

PM claims that “professors and investigators contend it's not surprising that [the Towers'] collapse-time estimates are close to would-be free-fall results” (pg. 44), and then proceeds to quote several of these said people. One of them is MIT professor Dr. Thomas Eagar, who said it was not surprising that each Tower collapsed in ten seconds. PM writes:

[Eager's] analysis explains that as exterior columns bowed and joists on the most heavily burned floors gave way, the mass of the collapsing floors created a cascade of failures (pg. 44).

This first thing that should be noted about PM's citation of Dr. Eagar is that his analysis actually contradicts NIST's analysis of the Towers' collapses. PM cites Dr. Eagar's paper, Why Did the World Trade Center Collapse? Science, Engineering, and Speculation, but when one actually reads what he wrote it is apparent that his analysis doesn't promote NIST's theory of collapse at all. In his paper, Dr. Eagar writes:

As the joists on one or two of the most heavily burned floors gave way and the outer box columns began to bow outward, the floors above them also fell.6

Whereas NIST told us that the exterior columns bowed inward, Dr. Eagar's paper asserts that the exterior columns bowed outward. By not quoting this section of his paper correctly, PM gives the impression that Dr. Eagar's analysis is in total agreement with the NIST investigators (though Eagar's paper currently provides a link to another article in the Journal of the Minerals, Metals and Materials Society that promotes NIST's theory).7 Instead, PM proceeds to directly quote from Eagar's paper:

The floor below (with its 1,300 ton design capacity) could not support the roughly 45,000 tons of ten floors (or more) above crashing down on these angle clips. This started the domino effect that caused the buildings to collapse within ten seconds, hitting bottom with an estimated speed of 200 km per hour.8

The next alleged expert PM cites is Dr. Keith Seffen, a senior lecturer in the engineering department at the University of Cambridge. They cite his paper, Progressive Collapse of the World Trade Center: A Simple Analysis, published in the Journal of Engineering Mechanics,10 as evidence that the Towers could have collapsed as quickly as they did as a result of the jet fuel and office fires. Instead of mentioning the technical refutations of Seffen's claims, PM quotes a non-technical writer, Peter Wakefield Sault, who claims that “Dr. Seffen is an accessory after the fact to mass murder.” 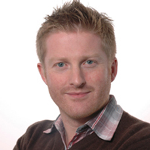 Dr. Keith Seffen has yet to respond to questions surrounding his defense of the official explanation for the Twin Towers' collapse.PM's citation of Sault's comments highlights their obvious ploy to cherry-pick supporters of the 9/11 Truth Movement to quote. Although a direct source for this quote is not provided (like most of the 9/11 Truth advocates quoted by PM), this statement is found not on the website PM provides, but on an obscure website. Sault is only commenting on a blog post about Keith Seffen.11 The fact that PM quotes from such an obscure source reveals their determination to portray anyone who questions the WTC collapses as a “crazy conspiracy theorist.” On the contrary, the study of the destruction of the Twin Towers entered the realm of laboratory research years ago with published articles in scientific and academic journals. 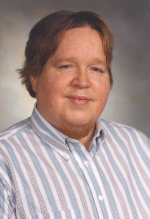 The critique of Seffen's WTC paper written by University of Iowa Physics Professor Dr. Crockett Grabbe points out the many unscientific arguments that Seffen made.Evidently, PM's writers and investigative journalists somehow missed an article written by Dr. Crockett Grabbe which refutes the arguments made in Seffen's questionable paper even though Grabbe's article was published in the very same journal as Dr. Seffen's paper.12 Though PM touts Dr. Seffen and his paper as providing excellent analysis of the WTC collapses, there is no mention of Grabbe's peer-reviewed response, even though Grabbe is a credentialed scientist. Instead, PM chose to cite an inflammatory remark on an obscure internet site.

Dr. Seffen never responded to Dr. Grabbe's discussion paper, which was published over three years ago. In addition, PM felt no need to quote Dr. Grabbe, who says on his website, “Seffen is an applied mathematician from Cambridge whose paper was on BBC News. I ripped his paper apart, and he never made any reply to my very critical comments.”13

PM finishes this section by quoting a section of NIST's report on the collapse of the Twin Towers that discusses the rate of collapse. The section reads:

Since the stories below the level of collapse initiation provided little resistance to the tremendous energy released by the falling building mass, the building section above came down essentially in free fall, as seen in videos. As the stories below sequentially failed, the falling mass increases, further increasing the demand of the floors below, which were unable to arrest the moving mass.14

PM also quotes from NIST's FAQ on the WTC collapses:

NIST estimated the elapsed times for the first exterior panels to strike the ground after the collapse initiated in each of the towers to be approximately 11 seconds for WTC 1 and approximately 9 seconds for WTC 2… Neither the duration of the seismic records nor video evidence (due to obstruction of view caused by debris clouds) are reliable indicators of the total time it took for each building to collapse completely.15

However, engineer and 9/11 researcher Jim Hoffman addressed both of NIST's assertions. In regards to the first point, Hoffman writes:

As for the second point, Hoffman writes:

To the contrary, video records, such as this record of the North Tower's fall, clearly establish upper boundaries on the times that it took for the vast majority of each tower to be destroyed.17

For more on the subject of the Towers' collapse rates, the following articles are recommended:

The Missing Jolt: A Simple Refutation of the NIST-Bazant Collapse Hypothesis, by Prof. Graeme MacQueen and Tony Szamboti

6 Quoted from: Why Did the World Trade Center Collapse? Science, Engineering, and Speculation, by Thomas W. Eagar and Christopher Musso http://www.tms.org/pubs/journals/jom/0112/eagar/eagar-0112.html

8 Quoted from: Why Did the World Trade Center Collapse? Science, Engineering, and Speculation

9 This analysis is shown in David Chandler's paper: Destruction of the World Trade Center North Tower and Fundamental Physics http://www.journalof911studies.com/volume/2010/ChandlerDownwardAccelerationOfWTC1.pdf (David Chandler also outlines this point in this video: http://www.youtube.com/watch?v=ZjSd9wB55zk)

12 The paper can be read here: http://www.sealane.org/writings/Seffenrevpub.pdf