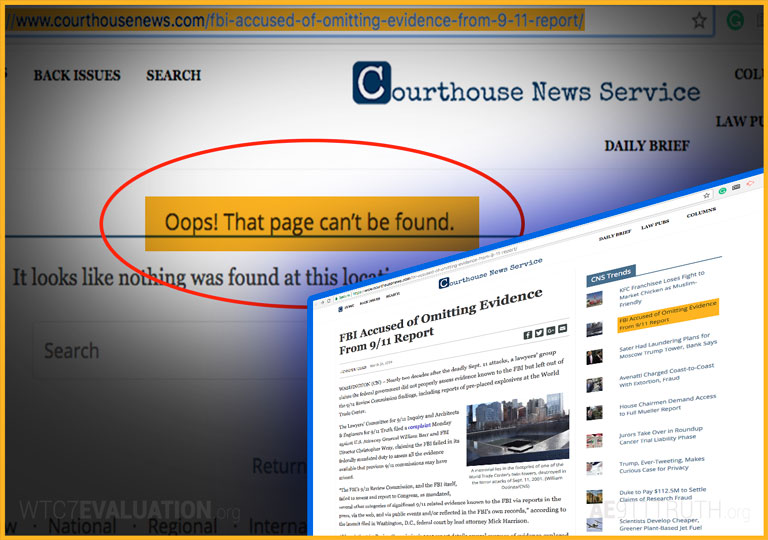 If you had to pick one example to best encapsulate the mainstream media bias and censorship that have contributed significantly to suppressing the truth about 9/11 for nearly two decades, it would have to be the extraordinary actions of Courthouse News Service earlier this week.

The first extraordinary action came on March 26, 2019, when Courthouse News published the article “FBI Accused of Omitting Evidence From 9/11 Report,” which — to the astonishment of many — offered fair coverage of the lawsuit filed one day earlier by the Lawyers’ Committee for 9/11 Inquiry, Architects & Engineers for 9/11 Truth, and 9/11 family member Bob McIlvaine.

In this rare deviation from the media’s dogmatic denigration of any person who questions the government account of 9/11 (and who refuses to believe that miracles took place that day), Courthouse News reporter Jennifer Hijazi committed the cardinal sin of failing to refer to the plaintiffs as “truthers” or “conspiracy theorists.” She also neglected to question their mental state or to dismiss out-of-hand the validity of their case against the FBI. Practicing objective journalism, she accurately quoted from the complaint and from her interview with attorney Mick Harrison.

“The plaintiffs’ attorney, Harrison, told Courthouse News that he is ‘cautiously optimistic’ they’ll see the injunction they’re looking for. He said the complaint isn’t about any one particular theory regarding the attacks, but simply ‘to force the FBI to do its job’ and present all the available evidence to Congress as required by its original mandate.”

The second extraordinary action came the following day, at around 6:00 PM Eastern, when Courthouse News apparently pulled the article from its website. This happened to coincide with the time that Architects & Engineers for 9/11 Truth sent a bulletin to its email list, sharing the refreshingly unbiased coverage with thousands of supporters — except that thousands of supporters were directed to a dead link.

As of now, approximately 24 hours after the article was first removed, Courthouse News has not provided an explanation for why its article is no longer available on its website. It could just be an innocent technical issue that will hopefully be fixed soon. On the other hand, it is more likely that the article was un-published for editorial reasons. 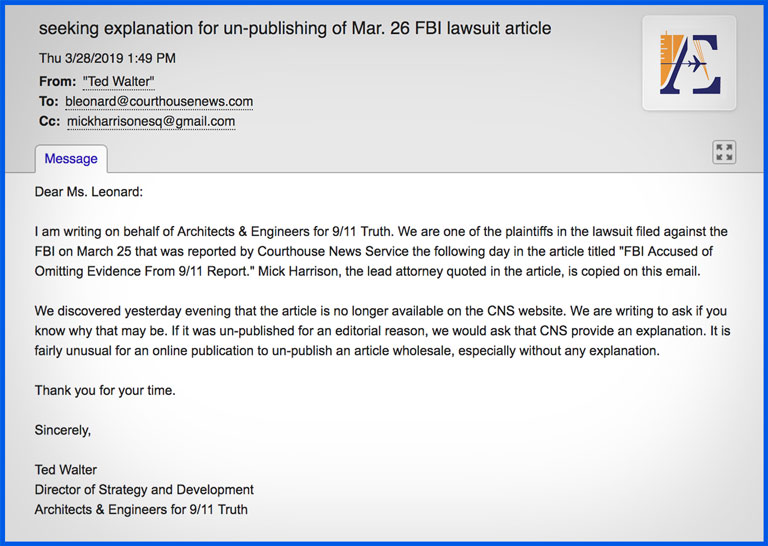 I am not a journalist. But, from the information I’ve gathered, it is exceedingly unusual for an online publication to completely yank an article it has already published. News outlets seem to agree that it should be done only as a last resort — when extreme journalistic malpractice has been committed — and that such deletions should always be accompanied by an explanation.

If Courthouse News did remove the article for editorial reasons, its editors should explain those reasons to the public (assuming they want to be taken seriously as a news source). Until that happens, we can reasonably surmise that Courthouse News censored its own article not because of any journalistic malpractice, but because of the woefully fair and accurate coverage that its young reporter afforded to groups and survivors still seeking truth and justice regarding the tragic events of 9/11.

The Courthouse News article can still be accessed on Wayback Machine and as a PDF on AE911Truth.org.