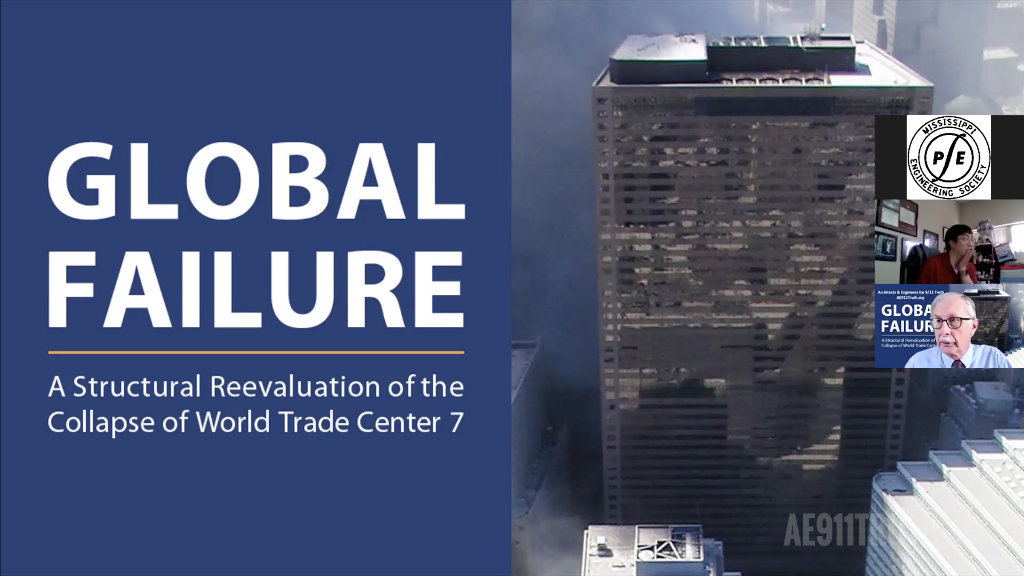 It would have been hard to write a better script.

Not only did representatives of AE911Truth’s Project Due Diligence (PDD) reach an audience of more than 200 engineers from Mississippi and Alabama with a presentation on Building 7, but a PDD volunteer took the opportunity to question the president-elect of the American Society of Civil Engineers following a presentation he made at the same conference on ASCE’s new code of ethics.

The Mississippi Engineering Society and the Alabama Society of Professional Engineers — both chapters of the National Society of Professional Engineers (NSPE) — hosted their joint winter meetings from February 24 to 26. And because the conference was virtual and didn’t require members to travel to a central location, the audience for the presentation was larger than it would otherwise have been, according to PDD coordinator and AE911Truth board member Roland Angle.

The national leadership of both ASCE and NSPE not only stand by the World Trade Center reports published by the National Institute of Standards and Technology (NIST), but both have sent statements to that effect to their member chapters across the U.S., effectively discouraging them from hosting PDD presentations.

Engineer Larry Cooper, who gave the presentation, noted that local chapters are usually more receptive to hearing the WTC evidence than are the national organizations.

“At the local level they are not necessarily aware of ASCE's complicity with NIST's reports that were done in 2005 and 2008,” Cooper says.

Prior to the event, PDD volunteer Zaida Owre noticed that the conference was to conclude with a presentation on engineering ethics by ASCE president-elect Dennis Truax. She decided this would be an ideal opportunity to address the ethics of ASCE's refusal to look at the evidence AE911Truth has assembled.

“It was a beautiful complement to our work,” Owre says. “It was like a bookend to our presentation.”

During the Q&A period, and in a subsequent email exchange, Owre encouraged Truax, who is a professor at Mississippi State University and also a long-time member of NSPE, to take the ethical approach and support further investigation of the WTC evidence. Truax, however, denied the ethical component, describing the issue as merely a technical one and referring questions on the subject to NIST.

“He pretty much avoided the whole topic,” Owre says. “But we’ll continue to press him and ASCE on this.”

Attending the session in addition to Cooper, Angle, and Owre was AE911Truth founder Richard Gage and University of Alaska Fairbanks professor emeritus Leroy Hulsey, who, as principal author of the UAF study, which was the focus of the presentation, was invited by the PDD team to answer questions from the audience.

Angle says the Mississippi and Alabama engineering societies have been supportive of AE911Truth’s efforts since they invited the organization to present to their members in May 2017. Key in paving the way for AE911Truth to make that presentation was Mississippi State University professor emeritus Oswald Rendon-Herrero. 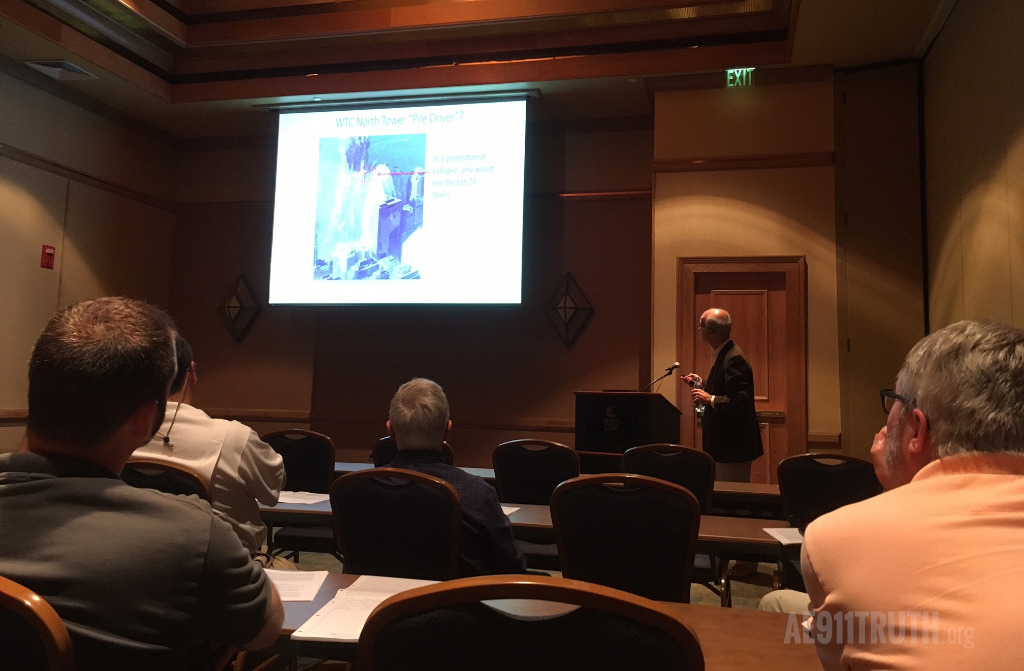 Roland Angle presents the WTC evidence at a 2017 joint meeting of the Mississippi and Alabama engineering societies.

The 2017 presentation went so well, Angle explains, that he and AE911truth volunteer Tony Szamboti decided to create a PowerPoint presentation that could be given to professional groups of all kinds. The result was Project Due Diligence. To date, PDD has given 35 presentations to a total of about 800 engineers across the U.S.

Following the February 2021 presentation, which Rendon-Herrero also helped arrange, MES has invited PDD to make a presentation on the Twin Towers at the group’s next conference in June. Angle says he finds that NSPE and ASCE chapters in more rural states, especially those in the South, are more open to AE911Truth's message than those in the Northeast.

“The closer they are to New York City, the more they don't want to know what you have to say.”