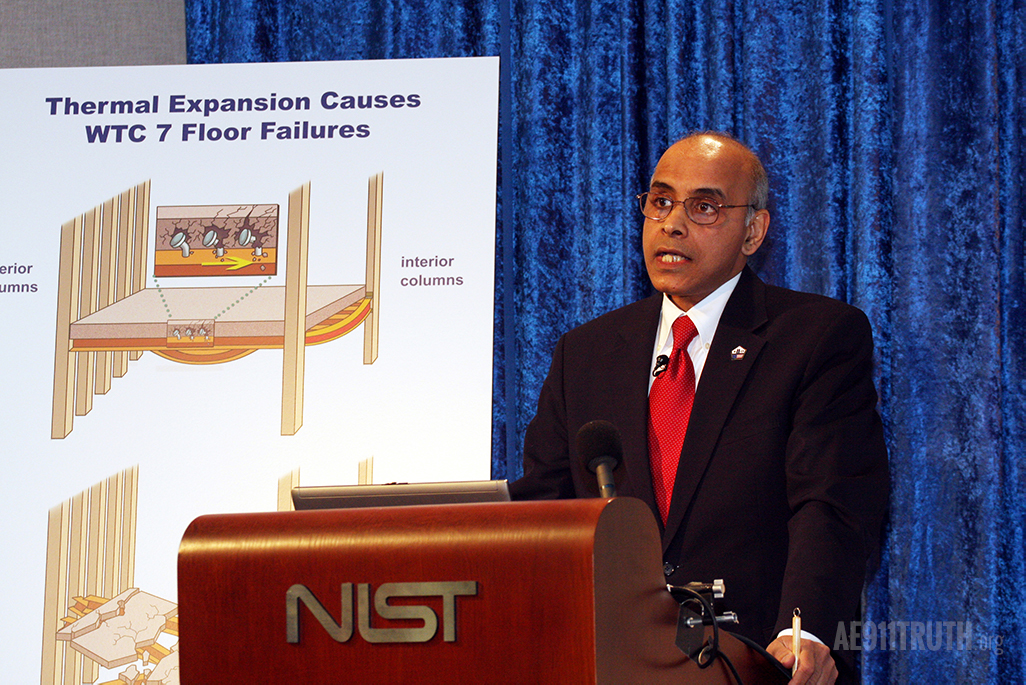 Read the February 1, 2022, update about the amended complaint filing >

A group of eight family members who lost children, parents, siblings, and spouses on 9/11 filed a lawsuit today against the National Institute of Standards and Technology. The lawsuit alleges that NIST violated federal law in its denial of a request for correction calling on the agency to throw out the conclusions of its 2008 report on the collapse of World Trade Center Building 7.

The eight family members were joined by 10 structural engineers and architects and by Architects & Engineers for 9/11 Truth. All three groups of plaintiffs were signatories to the original request for correction, which identified eight ways that NIST’s fire-based scenario for the collapse of Building 7 was both physically impossible and inconsistent with the available evidence.

The goal of the lawsuit is to obtain a court order that forces NIST to perform new analyses and to develop a new “probable collapse sequence” that is physically possible and consistent with the available evidence. The plaintiffs argue that the only such scenario is a controlled demolition of the building.

In August 2020, NIST issued its initial decision denying the request for correction. Architects & Engineers for 9/11 Truth decried the decision as a “blatant avoidance of the arguments and facts contained in the request.” Following the group’s subsequent appeal in September 2020, NIST took until June 2021 to issue a final decision — seven months longer than the agency usually takes to respond to such appeals.

The lawsuit alleges that NIST’s denial of the request for correction is arbitrary, capricious, and contrary to law because the agency’s responses to the arguments in the request are irrational, evasive, and unsubstantive.

“We submitted hundreds of pages of documents showing that their story for how Building 7 collapsed is totally bogus,” said Bob McIlvaine, whose son Bobby died in the World Trade Center — and who was slated to appear in the excised 30 minutes of Spike Lee’s NYC Epicenters 9/11 → 2021½. “NIST failed to give any meaningful response because their report is false and they know it.”

Matt Campbell, a UK citizen whose brother, Geoff Campbell, died in the attacks and whose family last month applied for a new inquest into Geoff’s death, said after the filing, “It is deeply troubling that NIST continues to mislead the public about what really happened. Anyone who watches the collapse of Building 7 with an open mind can see it’s a controlled demolition. It’s difficult to comprehend that this is even a debate and that so many people are complicit in preventing the truth from coming out.”

Chief among the counts in the lawsuit is NIST’s admitted omission of a key structural feature from its computer model — coupled with the agency’s “irrational” explanation for leaving it out. The plaintiffs argue that including the structural feature would prevent the initiating failure in NIST’s collapse scenario from taking place. They have asked NIST to rerun its analysis with the structural feature added, but NIST has refused to do so.

The plaintiffs also take aim at NIST’s refusal to study a piece of melted steel recovered from Building 7 and at the agency’s refusal to interview witnesses who reported explosions. These included Gigi Stone Woods, a reporter for NY1 whose videotaped account of an “incredibly loud explosion” surfaced last year and who in January confirmed her story to Architects & Engineers for 9/11 Truth.