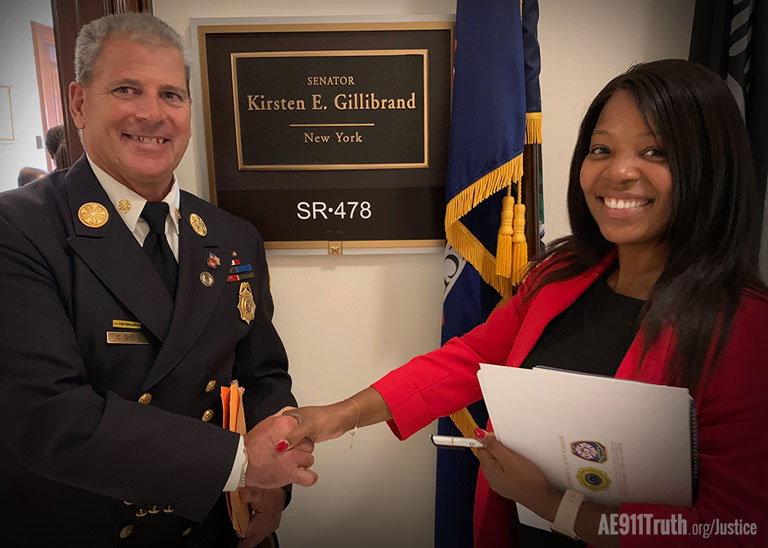 First Responders, Family Members, and AE911Truth Take to the Halls of Congress on 9/11

It was the most productive congressional outreach ever undertaken by the Architects & Engineers for 9/11 Truth.

From September 11 to 13, founder Richard Gage, staff members, and key partners of AE911Truth divided into teams and fanned out across Capitol Hill for meetings with the offices of 16 members of the U.S. House of Representatives and one U.S. senator. While most discussions were with legislative aides, two members of Congress participated personally.

Besides Gage, key leaders in the 18th anniversary meetings included Franklin Square and Munson Fire District Commissioner Christopher Gioia, 9/11 family members Bob and Helen McIlvaine, and Lawyers’ Committee for 9/11 Inquiry President David Meiswinkle. AE911Truth was also represented by Chief Operating Officer Kelly David, Director of Strategy Ted Walter, and Operations Manager Andy Steele. The large number of congressional meetings was made possible by supporters of AE911Truth who responded to an appeal in August asking them to request the meetings with their federal representatives. 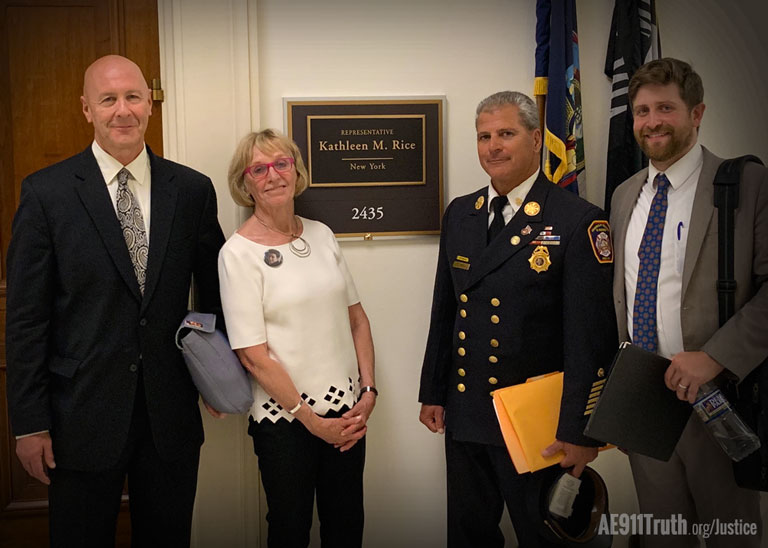 Among the several ground-breaking developments discussed in the meetings was the University of Alaska Fairbanks study on World Trade Center Building 7. Headed by Professor Leroy Hulsey, the four-year study concluded that the collapse of Building 7 was not caused by fire but by the “near-simultaneous failure of every column in the building.”

Another new initiative brought to the attention of congresspersons and staffers involved Commissioner Gioia’s fire district (located next to Queens, New York), which became, in July, the first fire district in the country to pass a resolution calling for a new 9/11 investigation. The strongly worded resolution states that there is “overwhelming evidence” that the three World Trade Center towers were brought down by explosives.

The McIlvaines, whose son Bobby was killed by an explosion as he was about to enter the lobby of the North Tower on the morning of September 11, 2001, urged lawmakers to sponsor and pass the Bobby McIlvaine World Trade Center Investigation Act, which would establish a select committee in either chamber of Congress to reinvestigate the WTC destruction. Meanwhile, Meiswinkle informed members of Congress about the grand jury petition that the Lawyers’ Committee filed last year with the U.S. Attorney for the Southern District of New York.

Before heading to congressional offices on the first day of meetings, Gioia, Gage, Meiswinkle, and Bob McIlvaine spoke at a press conference held at the National Press Club to inform the media about these various initiatives. While mainstream media largely stayed away, as they usually do whenever the official story of 9/11 is being challenged, Fox News did send a cameraman, who recorded the entire event. Unfortunately, no report was aired on any Fox station.

The group headed by Gioia felt that the meetings it had with aides to four New York members of Congress — Senator Kirsten Gillibrand and representatives Alexandria Ocasio-Cortez, Thomas Suozzi, and Kathleen Rice, the latter of which is Gioia’s representative — were especially productive.

One of the two face-to-face meetings involving a representative was with controversial Republican Congressman Steve King of Iowa. Gage reports that King was quite receptive to the information, asked detailed questions about the evidence, and had excellent suggestions about how to approach other members of Congress. The King meeting was set up by a resident of his district — AE911Truth volunteer Jack Bucklin — who has been approaching presidential candidates with 9/11 information when they come to campaign in Iowa.

The second elected official to meet with an AE911Truth representative in person during the anniversary visit was Rep. Vicky Hartzler (R-Missouri). She sat down with Andy Steele, who says she appeared genuinely interested in the material he shared with her — especially in the Building 7 study.

Volunteers from the local group DC911Truth showed up in great measure and did their part by delivering packages to all 535 members of Congress. The packages included a copy of the Bobby McIlvaine Act; a moving letter from Gioia; evidence “postcards” that concisely outline the explosive evidence regarding the destruction of the towers; and a one-page summary of the recent YouGov survey commissioned by AE911Truth, which found that a majority of Americans who see video of the collapse of Building 7 are certain or suspect it was due to a controlled demolition. 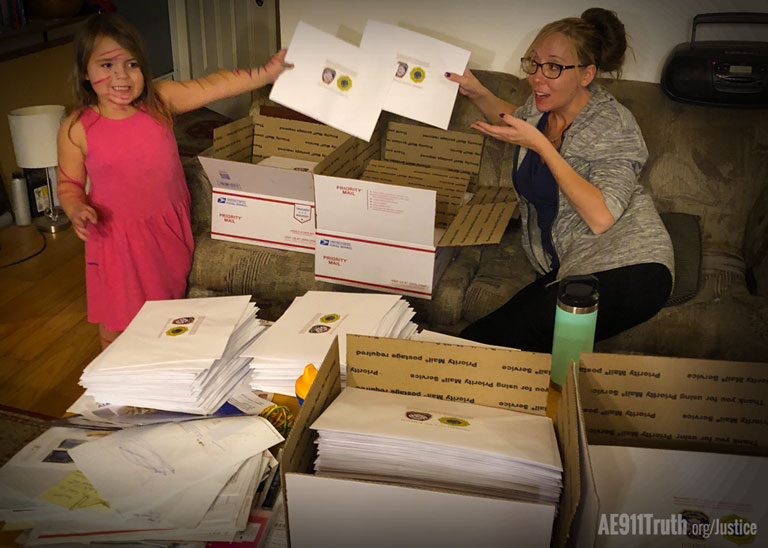 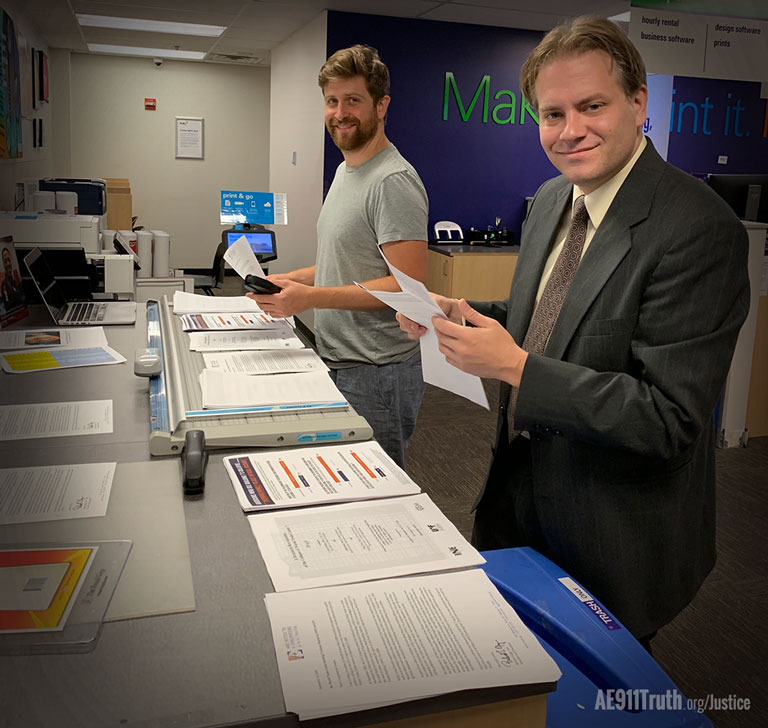 AE911Truth’s Andy Steele (foreground) and Ted Walter prepare packets on the UAF WTC 7 study for every member of the House Oversight Committee and the House Science Committee.

On the final day of the visit, Steele delivered a packet to each member of the House Committee on Oversight and Reform (chaired by Cummings, whose office hosted a meeting) and the House Committee on Science, Space, and Technology. The packet included a cover letter from Gage, the abstract of the UAF report, and the one-page summary of the YouGov survey. Steele also gave the UAF abstract and the YouGov survey results to Rep. Don Young (R-Alaska), who is the sole representative from Alaska.

Everyone involved agreed that this year’s trip to D.C. was the most eventful and fruitful that AE911Truth has ever made. Not only did the information reach more Washington decision-makers than ever before, but there was an unprecedented level of receptiveness. The group attributes this largely to the UAF study and to the presence of Commissioner Gioia — as well as to the message finally getting through after two years of relentlessly pushing the Bobby McIlvaine Act.

“It was an incredibly successful D.C. outreach,” Gage said. “We simply could not have reached so many members of Congress without the help of our amazing supporters. We really do owe it all to them.”