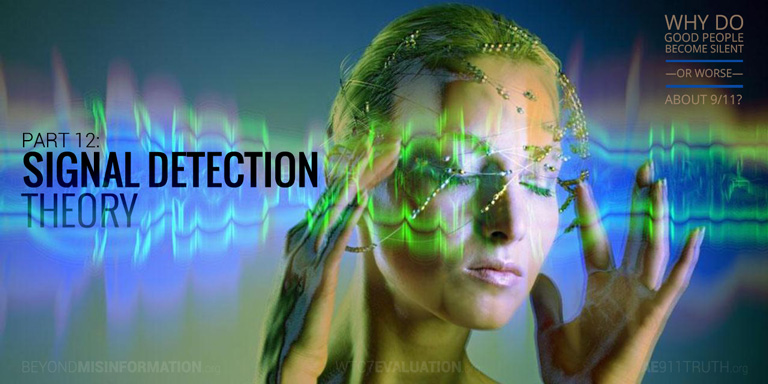 We continue Ms. Shure's analysis with "Part 12: Signal Detection Theory," which reports on whether or not people perceive information amid external and internal distractions, and how this perception may effect their receptivity to the educational efforts of 9/11 skeptics.

The study of how acutely individuals discriminate when making decisions, including psychological factors that bias those decisions, has resulted in the Signal Detection Theory.1

Nearly all human decisions are made in an environment of uncertainty. All of the stimuli, both external and internal, that create this uncertainty are called “noise.” To perceive reality accurately, we must be able to detect a “signal” amid the distracting noise. The more noise there is, the harder it is to detect the signal.

How does this theory apply to why people are silent, or worse, about the information provided to them by 9/11 skeptics?

Let's assume you're a believer in the official 9/11 story. You meet a friend at a crowded party. The music is loud. Over the din, he tells you he thinks 9/11 was a false flag operation. He pulls his smart phone from his pocket and shows you World Trade Center Building 7 falling into its own footprint. He tells you that 2.25 seconds of this collapse (eight floors’ worth) was at free-fall acceleration, and that this can only be explained if explosives cut through the steel columns. You like and respect this friend, so you are open to his signal. But can you hear it clearly enough to make a decision about reality?

The “external noise” is not only the distraction of the party-goers and the loud music, it is also the official myth of 9/11 constantly repeated by the media in myriad ways. Additionally, you receive, on any number of subjects, at least 100 emails a day, plus Facebook "likes" and texts (will they ever end?!) — and, on top of all that, you're bombarded with the news that there has just been another mass shooting by a crazed young kid.

The "internal noise” includes our psychological capacity for receiving more negative information about the world situation, as well as our energy level, our belief systems, our responsiveness to social norms, our degree of education in critical-thinking skills and scientific thinking, and our ability to deal with uncertainty.

The greater the external and internal noise, the less likely it is that we will accurately detect the signal from our friend. But even if we perceive the signal about WTC 7, we may engage in doublethink (addressed in Part 4) to maintain a semblance of order and sanity, to “fit in,” and to avoid truly having to face and change our key beliefs — beliefs such as, “Officials in our government may lie and do bad things, but they would never orchestrate such extraordinary deception with such devastating consequences.”

The vignette above describes, for many of us, our modern, information-overloaded American lifestyle.

Nevertheless, in the aforementioned 2006 Scripps Howard poll (in Part 11), thirty-six percent of respondents overall said it is “very likely” or “somewhat likely” that certain federal officials either participated in the attacks on the World Trade Center and the Pentagon or took no action to stop them.2

What does the 9/11 skeptics’ success in educating the public to this extent mean? Most likely, it indicates that the evidence showing that we have been lied to about 9/11 has been a very strong signal indeed — strong enough for fully one-third of Americans to detect it, despite the relentless propaganda "noise machine" repeatedly grinding out the official story.

As we acknowledge this educational success, we should also be aware that there is another group of individuals whose lives are filled with such overwhelming challenges that their capacity to receive anything but inspiring and hopeful information is severely limited. Their internal noise is very loud, demands their full attention, and drowns out the 9/11 Truth signal.

For instance, a friend responded to my email about my 9/11 Truth work by writing about the weather and other sundry news. Frustrated, I nudged her with another email: “But what do you think about the 9/11 evidence I mentioned in my last email?”

She replied, “The day before 9/11 happened I had such a clairvoyant happening.... I was so upset and confused that I thought I was having a stroke... never felt so emotionally upset in my life.... I have these happenings, so have to watch myself to not get too involved or my body may not survive. I get rapid heartbeat, too, that they have been unable to diagnose, but we manage with various meds....”

Of course, respect for her condition ended all of my attempts to educate her about 9/11.

Another example: Two friends told me that they had been speaking to a good friend of theirs who is on medications for bipolar disorder. Their friend had just lost his business, and was facing serious family problems:

“He indicated that he believed the official story about 9/11, so we told him about WTC 7, about the symmetrical free fall and how this cannot happen without controlled demolition. He gave us a blank stare for a few seconds and then said, ‘You know, it’s just not convenient for me to think about this right now.’ This was so honest, and needless to say, we dropped this topic immediately.”

Sometimes these overwhelming challenges are not this visible, but if we are attuned, our sensitivity will enable us to detect that, for some unknown reason, there is internal noise that precludes a person from being able to hear our signal about 9/11 Truth.

Our respect for these people demands that we honor their needs by not pressing our issue, but instead offer them heartfelt empathy.

Whether people are overwhelmed or not, surely the 9/11 skeptic’s signal is more easily detected by those who have prior knowledge of governmental lies and State Crimes Against Democracy — the subject that will be described in Part 13.

Note: Electronic sources in the endnotes have all been archived. If they can no longer be found by a search on the Internet, readers desiring a copy may contact Frances Shure for a copy [ This email address is being protected from spambots. You need JavaScript enabled to view it. ].