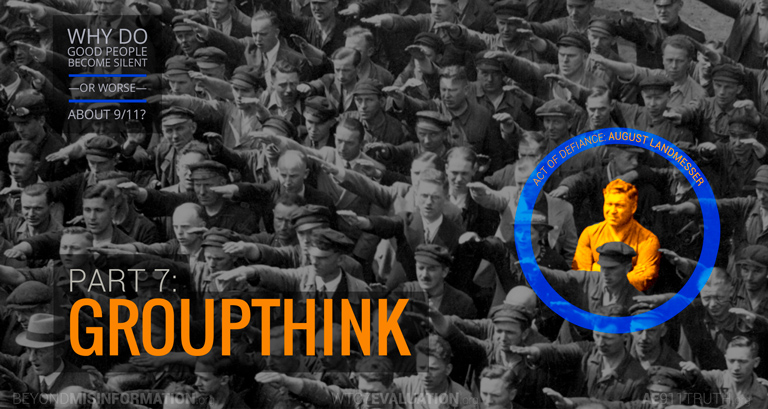 In Part 7, we continue Ms. Shure's analysis with an especially maladaptive form of conformity called "groupthink." 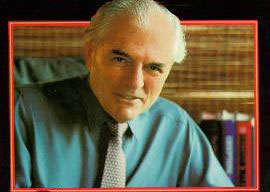 Conforming to folkways and mores is natural, and it can help a society function cohesively and smoothly. There is, however, a threshold at which conforming becomes maladaptive and produces poor decisions. Crossing this threshold leads us into the phenomenon of "groupthink," first studied by social psychologist Irving L. Janis.

Groupthink is a maladaptive manifestation of conformity in which the desire for unity by the group members results in an incorrect or deviant decision-making outcome. Groupthink is the proclivity of members of an "in-group" to conform to the prevailing view within this particular group, as well as to apply peer pressure that strongly discourages alternative views from being expressed and evaluated. These dysfunctional dynamics produce an inflated sense of certainty in the decisions of the group, and they often result in irrational and dehumanizing actions by the in-group toward an "out-group."1 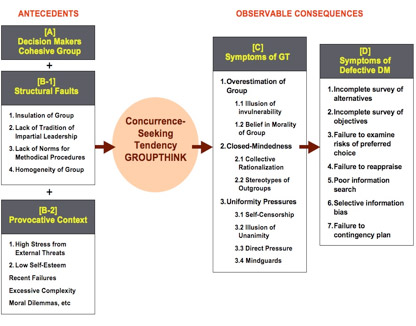 The dynamic of groupthink is a controversial area of psychological research. Throughout this series, nevertheless, we have seen several examples of groupthink. Consider the cult studied by Festinger et al. in Part 5. It is highly likely that the peer pressure within this group forbade any serious questioning of their sacred myth of apocalypse and rescue by aliens. We clearly saw the poor decisions made as a result — adhering unquestioningly to Marion Keech's automatic writing when the aliens did not show up and developing a secondary belief when cognitive dissonance arose. We also observed the members' inflated sense of certainty (actually, a defense against cognitive dissonance) as they began proselytizing.

Part 3 introduced the Philip Zimbardo and Jane Elliott studies, in which we saw poor decisions made when the subjects became abusive toward the out-group.

Finally, in Part 6, Solomon Asch's experiments on conformity demonstrated poor decisions by 38.6% of the subjects as they acquiesced to the wrong answers of the majority.

Solomon Asch believed that independent thought and disagreement among group members and settling these differences through discussion are the cornerstones of a healthy group dynamic, resulting in better decisions.2 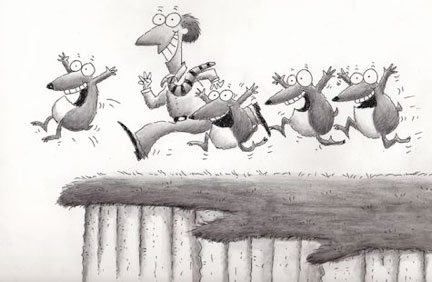 Taking this as a standard of healthy functioning, let's imagine we had a society with a Congress whose members are open-minded enough to discuss with their concerned constituents the evidence indicating that the Bush administration was lying about the events of 9/11 — evidence such as NORAD's changing stories to the 9/11 Commission about the air defense failure. And imagine a National Institute of Standards and Technology (NIST) that would enter into intense and ongoing discussion with Dr. Niels Harrit, Dr. Steven Jones, and David Chandler about their research — research that contradicts NIST's analyses of the destruction of the three World Trade Center (WTC) buildings. If such open discussion is a sign of healthy decision making and a healthy society, then it is clear that our current U.S. society is profoundly dysfunctional.

Whether we are inside or outside a 9/11 Truth community, it is instructive to all of us to be aware of the signs of groupthink, such as attempts to censor others' alternative opinions or thoughts, self-censorship, and the demonizing or stereotyping of an out-group. The more aware we are, the more we can guard against succumbing to this human frailty.

While a weak ego structure makes us more vulnerable to groupthink and to the level of maladaptive conformity described in the above studies, a strong degree of genuine autonomy and individuation helps to protect us from these tendencies.3

A sincere commitment to truth and to cultivating a strong internal observer of our own reactions can help override our human inclinations toward doublethink, maladaptive resolution of cognitive dissonance, and maladaptive conformity. Both meditation and psychotherapy can help cultivate our inner observer.

Another important key to any effort to obtain truth is science, as science has built-in protections such as the testing of hypotheses with experiments, and the expectation that one's method and data be shared so that these are subject to the scrutiny of other scientists. This scientific standard of sharing methodology and data has still not been met by NIST for its analysis of the destruction of WTC 7. Ironically, in response to FOIA requests for these data, the director of NIST has actually claimed, with a straight face, that to release such data might "jeopardize public safety."4

Science has its limitations for understanding reality, but without science, we would still be living in the world of superstition and the former church dogma that the sun revolves around a flat Earth. A key to winnowing superstition, dogma, and groupthink delusions from reality is scientific experimentation — shared and replicated by other scientists.

The scientific process has even been able to shed light on the workings of our own brains. Fascinating studies demonstrate that many of our human proclivities toward resisting new and challenging information are actually hardwired in our nervous systems. This research gives us another vehicle for understanding the reactions we all have, to one degree or another, when presented with evidence that challenges our current worldview.

3Alice Miller, Drama of the Gifted Child: The Search for the True Self (New York: Basic Books, 1997).