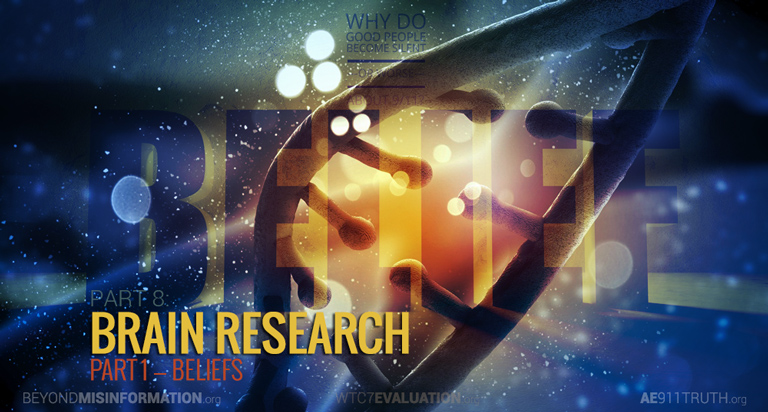 We continue Ms. Shure's analysis in "Part 8: Brain Research — Structure and Beliefs," which examines how beliefs—and our tendency to hold onto beliefs—are encoded in our DNA and our central nervous system.

One of these studies reveals the discovery of a "liberal gene" that has been linked to a personality type that is driven to seek out new experiences.2 Could this partially account for the fact that 2.5% of people from the Diffusion of Innovation studies, explored in Part 2, are more venturesome with new ideas?

Perhaps. We must, however, be careful not to draw conclusions prematurely from these studies. A newcomer to 9/11 Truth might assume that this movement is a liberal one, but this is not at all what we find by observation or from polls. For example, physicist and former Republican Steven Jones, architect and "Reagan Republican" Richard Gage, AIA, and economist Paul Craig Roberts (Assistant Secretary of the Treasury under Reagan) speak out courageously about 9/11 evidence that contradicts the official sacred myth.

An August 2004 Zogby poll revealed that nearly half of New York City residents and 41% of New York state citizens believed that some of our leaders knew in advance that the attacks were planned on or around September 11, 2001, and that they consciously failed to act. Within these percentages, nearly 30% were registered Republicans and 38% described themselves as "very conservative."3 The 9/11 Truth Movement, therefore, spans the political spectrum.

In his article "Why Bad Beliefs Don't Die," psychologist Gregory W. Lester argues that survival is the primary function of the brain, and this takes priority over all of the brain's other functions. Beliefs are maps of reality that help us negotiate our world in the absence of sensory data. In fact, beliefs are designed to operate independently of sensory data. "The whole survival value of beliefs," Lester says, "is based on their ability to persist in the face of contradictory evidence."4

For example, when you park your car in the garage and go inside your house, you maintain the belief that your car is safe in the garage even though you cannot still see the car. You do not need to go and check on it every five minutes. That is a clear survival advantage, as you can spend your time doing other things, such as eating your dinner.

The above example is quite simple, but according to Lester, the dynamic of the brain applies in the same way to paradigm shifts of beliefs. Thus, it was normal for people to adopt a mindset or map accepting the official version of what happened on 9/11 when our authorities told us that 19 Muslims attacked us because they "hate our freedoms," and when the media did not report (or bother to investigate) any contradictory evidence. Our brains have a tendency to accept "facts" conveyed by authorities. These "facts" in turn become our beliefs about reality. 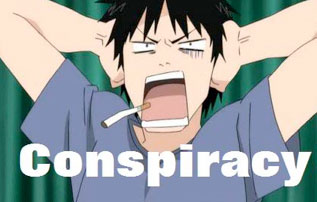 Some of us become defensive and hostile when skeptics challenge our beliefs with contradictory facts.

In the case of 9/11, the official story becomes our sacred myth that explains why there is an unending Global War on Terror and why we must give up our liberties to be safe. If we then receive information that contradicts this worldview, the brain's reaction is fear, feeling that survival is at stake. It is predictable that many of us will become defensive and hostile when skeptics challenge our beliefs with contradictory facts — even simple ones. As Lester has stated:

Beliefs do not occur individually or in a vacuum. They are related to one another in a tightly interlocking system that creates the brain's fundamental view of the nature of the world. It is this system that the brain relies on in order to experience consistency, control, cohesion, and safety in the world. It must maintain this system intact in order to feel that survival is being successfully accomplished. . . . Trying to change any belief, no matter how small or silly it may seem, can produce ripple effects through the entire system and ultimately threaten the brain's experience of survival.5

We can apply this statement to efforts to educate people about any subject that contradicts a worldview, but it applies especially to 9/11 due to the dire implications this contradictory evidence suggests. To open the mind to even one bit of seemingly inconsequential information — such as San Francisco Mayor Willie Brown having received a warning eight hours in advance not to fly to New York on September 11, 20016 — can ripple through the entire system of belief about what happened on that fateful day, threatening one's sense of control and cohesion.

How, then, can Truth advocates become more effective in helping others receive contrary information about what really happened on 9/11? Lester offers several helpful suggestions for how to challenge worldviews, including the following:

Skeptics must learn to always discuss not just the specific topic addressed by the data, but also the implications that changing the related beliefs will have for the fundamental worldview and belief system of the affected individuals. Unfortunately, addressing belief systems is a much more complicated and daunting task than simply presenting contradictory evidence. . . . The task is every bit as much philosophical and psychological as it is scientific and data-based. . . . It is entirely normal for people to be defensive in such situations. . . . It's a fight for survival. The only effective way to deal with this type of defensiveness is to de-escalate the fighting rather than inflame it. . . . Skeptics will only win the war for rational beliefs by continuing, even in the face of defensive responses from others, to use behavior that is unfailingly dignified and tactful and that communicates respect and wisdom. For the data to speak loudly, skeptics must always refrain from screaming.7

Therefore, while presenting accurate data is crucial, so is becoming adept at understanding and relating to people who have had their worldviews shaken. When addressing those who believe the official account of 9/11, the task of skeptics of this account becomes as much psychological as it is evidence-based.

In this essay, we have been exploring why some hear the contradictory information about 9/11, adjust to it, and then get active, and why others resist, sometimes vehemently. For those of us who do adjust and get active, Lester has some encouraging words:

It should be comforting to all skeptics to remember that the truly amazing part of all of this is not that so few beliefs change or that people can be so irrational, but that anyone's beliefs ever change at all. Skeptics' ability to alter their own beliefs in response to data is a true gift; a unique, powerful, and precious ability. It is genuinely a "higher brain function" in that it goes against some of the most natural and fundamental biological urges. Skeptics must appreciate the power and, truly, the dangerousness that this ability bestows upon them. They have in their possession a skill that can be frightening, life-changing, and capable of inducing pain. In turning this ability on others it should be used carefully and wisely. Challenging beliefs must always be done with care and compassion.8

Lester wisely advises skeptics to keep their eyes on their goal, and to see the long view of their mission. Compassion will likely increase as we gain more understanding of both ourselves and others, as we shall see in some of the subsequent sections of this essay.

2Amie Ninh, "Liberal vs. Conservative: Does the Difference Lie in the Brain?" Time magazine (April 8, 2011), http://healthland.time.com/2011/04/08/liberal-vs-conservative-does-the-difference-lie-in-the-brain/; this study was reported in the April 7 issue of Current Biology.