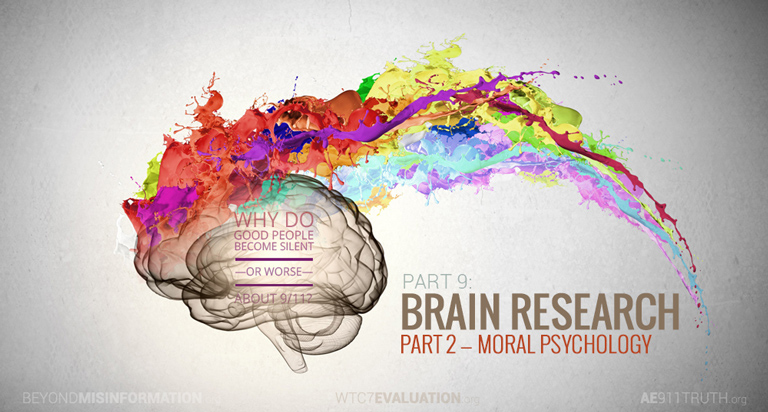 How do we acquire our values and our morals? Through reasoning, through emotion, or both? Do conservatives and liberals differ in their values? Does morality vary across cultures? Does our neurology affect our morality?

These are the types of questions that moral psychologists and neurologists are trying to answer, and recently, research in moral psychology has increased voluminously. It is a hot topic.

A few scholars in the humanities and sciences drafted a list of points on morality research upon which they could all agree. Among their points of consensus was that human morality is both innate and culturally derived. The innate building blocks of human morality are the products of evolution, with natural selection playing a critical role.1

A question that 9/11 activists often ask is, “Why don’t more people become active in our movement, or at least support us, when they clearly understand that 9/11 was a staged event?” Why do they instead become silent? Many conclude from the evidence — and from the implications of that evidence — that elements within our government had to be involved in this mass murder. They know that, in the aftermath of 9/11, hundreds of thousands of our fellow human beings have been murdered, nations have been ruined, and civil liberties have been gutted; and they are aware that, to this day, these atrocities continue.

This is a moral issue. I challenge moral psychologists to grapple with this issue, instead of joining the conspicuous silence!

George Lakoff has looked at the research in moral psychology. In his book, The Political Mind, he summarizes some of the findings that give us some insight into the profound silence of those who have at least accepted the 9/11 evidence and its implications, but who choose to keep quiet.

Lakoff theorizes that our brains are wired to direct us toward well-being. Well-being is tied to right behavior, which is guided by our moral convictions, many of which are built into the human nervous system. For example, research into mirror neurons shows that we are hardwired for empathy and cooperation. A mirror neuron is a type of brain cell that responds in the same way when we observe a specific action by another as it does when we are performing that very same action ourselves. This discovery by neuroscientists helps to explain our human capacity for empathy.

The mirror-neuron mechanism translates into the moral value common to many religions: “Do unto others as you would have them do unto you.” In Judaism, for example, “mitzvah” means a commandment to do good, and in everyday speech, mitzvah has come to mean a simple act of human kindness. But why is mitzvah a commandment? From the view of brain research, says Lakoff, this commandment and others similar to it manifest from our neural wiring: We feel good when we are kind to others. From this mirror-neuron point of view, when we see others happy, we become happy.

This innate structure can make it difficult for 9/11 skeptics to present the evidence showing that we have not been told the truth about 9/11, because virtually no one is going to feel happy upon hearing this information. If we are psychologically healthy, we do not want to cause distress in others. Nevertheless, a higher moral calling drives activists in the 9/11 Truth Movement forward, so that they courageously transcend their inner taboo barriers and intrepidly present their evidence. There is too much at risk, they believe, to not do so.

Lakoff theorizes that moral convictions are hardwired in our brains. If he is correct, we can easily see how these innate convictions help explain why good people become silent — or worse — about 9/11.

Hardwired convictions that are especially relevant to the subject at hand include the following: We will be better off if 1) as children, we obey our parents than if we disobey; 2) we are with our community rather than opposed to it; and 3) we do not challenge those who have more power than we have.2

Therefore, according to the brain’s drive toward well-being, morality requires staying within the boundaries of our community — adhering to the current consensus reality and the mores of the culture. To challenge these boundaries is seen by the brain as deviant, and being deviant is synonymous with being immoral.3 This is so even if the challenge to the community is obviously from a higher moral calling, as in the case of the White Rose student resistance that protested Nazi Germany’s warmongering and concentration camps. In this tragic case, the authorities saw these students as immoral deviants threatening the power structure. They were jailed, and after a show trial, the brave, young leaders were summarily executed. These students had famously insisted, “We will not be silent!” — a motto that lives on in spirit in today’s activists of all stripes, but especially those championing difficult, taboo subjects like 9/11.

The questions then become, “If we are hardwired to conform to authority, how does change ever occur? Why are there revolutions against tyranny and corruption? Why does consensus reality ever change?”

It appears that humans are very tolerant of their authority figures, but when parents or governing institutions go too far in abusing or deceiving, other biologically wired moral convictions kick in, including:

Research into the fascinating subject areas of the brain and moral psychology will surely continue, giving us greater clarity into our human resistance to information that contradicts our sacred mythologies, and giving us more insight into why those who know the evidence about 9/11 do not find their voice — in their silence leaving only the sound of chirping crickets.

Shifting to other lenses through which to understand why some people can become aggressively zealous about their chosen worldview, our exploration leads us next to the theories of Terror Management Theory and Systems Justification Theory.

1A statement of consensus reached among participants at the Edge.org conference, The New Science of Morality (June 20–22, 2010), http://www.edge.org/3rd_culture/morality10/morality_consensus.html.