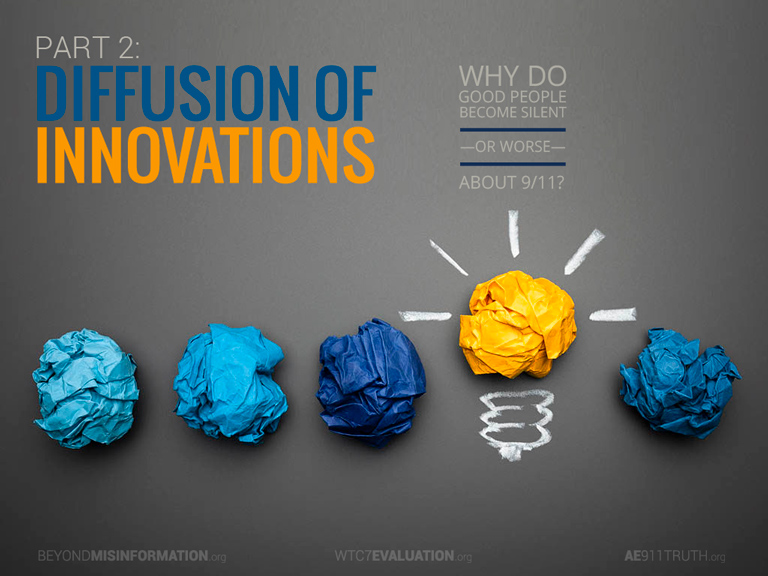 In this installment, we continue Ms. Shure's analysis with "Part 2: Diffusion of Innovations," an anthropological study of how new ideas become accepted in societies and, based on that, a look at possible ways the truth about what really happened on 9/11 can become accepted.

Anthropologists and rural sociologists have observed that within diverse cultures there consistently can be found groups that vary in their openness to new ideas and technology — groups that fall within a neat bell curve. In each culture, a few adventurous members (only 2.5%) readily adopt innovations. These venturesome folks are called “innovators.” 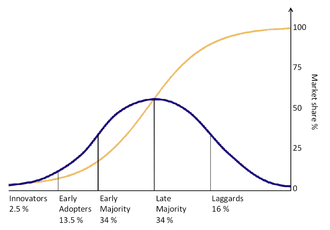 The opinion leaders (13.5%) come next. Termed “early adopters,” they are influential and respected members of society. They listen to the innovators, and then, upon reflection, may change their mind-set and adopt the innovation.

The “early majority” (34%) switch after listening to the influential early adopters.

The “late majority” (also 34%) adopt the new way only because it is practical to do so.

The “laggards” (the last 16%) may never change their minds.

These percentages hold for situations as disparate as the sale of a new technology from Silicon Valley and a new, paradigm-shifting idea for improving the safety of drinking water in a traditional village in Peru. It makes no difference.

This description of how change occurs in societies is called “Diffusion of Innovations.”1 Western businesses are applying this knowledge to determine the best strategy for marketing new technological products.2 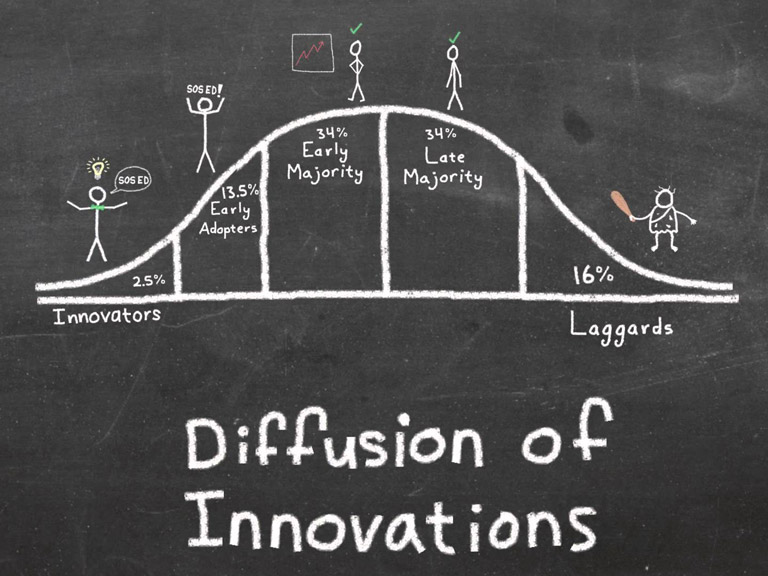 The successful spread of an innovative technology or a new idea reliably hinges on one point: whether or not opinion leaders — the early adopters — vouch for it.3

Professionals familiar with the practical application of this theory may be able to offer advice to the 9/11 Truth Movement.

Questions to be raised may include:

Many influential people in our society — those who would be seen as early adopters — remain strangely silent about the stunning evidence that clearly shows we have not been told the truth about the attacks of September 11, 2001. Notable exceptions are those prominent citizens listed at Patriots Question 9/11.5

Perhaps the most obvious barrier to opening up public discussion about what happened on 9/11 is the corporate-owned media, which are possibly still being infiltrated by a program similar to the CIA’s Operation Mockingbird6 — another paradigm-shifting, sacred-myth-destroying reality about which most Americans have yet to learn.

In our Western culture, the mainstream media are clearly authoritative opinion makers. What we see on television, hear on the radio, or read in newspapers and magazines, and the “spin” about this news, becomes our “reality.” Could this ready acceptance of media pundits’ reporting and opining be a cultural flaw? [Note to readers: Part 21 will discuss the history of the U.S. “press” as well as address in further detail the powerful role of the media in determining why good people become silent, or worse, about 9/11.]

Let’s face it. If, from the beginning, the media had reported on even a fraction of the plethora of details that contradict the official account of 9/11, or had at least expressed suspicion and followed up with honest investigative journalism, then the sacred myth of 9/11 would not have anchored itself in the minds of Americans as well as citizens of other countries. In addition, besides abrogating their journalistic duties, some in the media might very well be considered criminally culpable for aiding and abetting the cover-up of the crimes of 9/11 — mass murder and treason, primarily — and for being accessories after the fact.7

Clearly related to our proclivity to trust the influential “early adopters” is our proclivity to trust and follow authority, which we will explore next. Researcher Stanley Milgram’s startling studies of the early 1960s found that humans tend to readily obey orders from a respected authority, even when doing so violates our deepest moral beliefs. Following Milgram’s studies, third-grade teacher Jane Elliott and Stanford social psychologist Philip Zimbardo conducted studies that have expanded our understanding of how deeply we are influenced by authority figures.

4 For the meaning of the term “sacred myth,” see David Ray Griffin, Ph.D., 9/11: The Myth and the Reality, DVD at http://www.amazon.com/9-11-The-Myth-Reality/dp/B000O0YV7O and transcript of lecture at http://davidraygriffin.com/articles/911-the-myth-and-the-reality.

6 Carl Bernstein, “The CIA and the Media: How America’s Most Powerful News Media Worked Hand in Glove with the Central Intelligence Agency and Why the Church Committee Covered It Up,” http://carlbernstein.com/magazine_cia_and_media.php.

William Casey, CIA Director (1981–1987), candidly said, “We’ll know our disinformation program is a success when everything the American public believes is false.”

In a personal e-mail communication to me, Barbara Honegger confirmed that she was the source of this quote, having been in attendance as the then-White House Policy Analyst at the February 1981 meeting in the White House Roosevelt Room with President Reagan and his new cabinet secretaries and agency heads. New CIA Director William Casey spoke these words in response to a question the President put to all of the cabinet secretaries and agency heads: “What are your main goals for your department or agency?” Having worked with radio show host Mae Brussell upon returning to California from the White House, Honegger was also the source for Brussell's second-hand report about Casey’s words. Honegger also said she recalls Casey saying “. . . program is a success . . .,” rather than “. . . program is complete.” For further detail on Honegger's account of this quote, see http://www.infiniteunknown.net/2015/01/15/did-cia-director-william-casey-really-say-well-know-our-disinformation-program-is-complete-when-everything-the-american-public-believes-is-false.

7 Kristina Borjesson, ed., Into the Buzzsaw: Leading Journalists Expose the Myth of a Free Press (Prometheus Books, 2004). In this anthology, see Dan Rather’s “The Patriot and the Censor’s Necklace: An Interview with BBC Culture Correspondent Madeleine Holt,” on the pressures to avoid asking tough questions; and see Charlotte Dennett’s “The War on Terror and the Great Game for Oil: How the Media Missed the Context.” The entire anthology documents the control, suppression, manipulation, and distortion of information by the news media, which many believe has reached a crisis level.

For more about the crisis of credibility of our mainstream media, see Peter Phillips and Mickey Huff’s “Truth Emergency and Media Reform,” http://www.dailycensored.com/truth-emergency-and-media-reform.