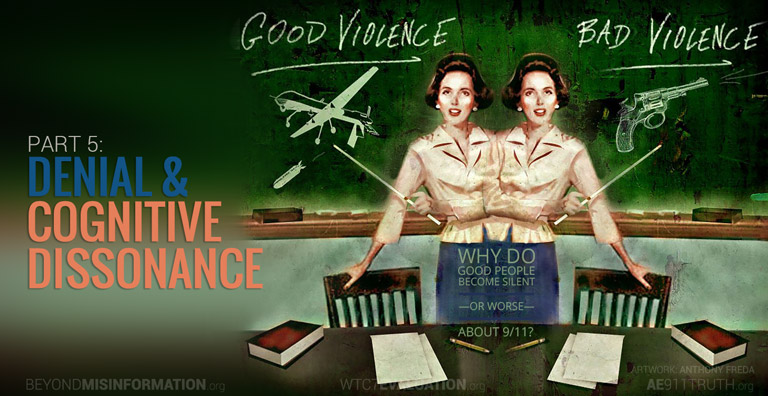 We continue Ms. Shure’s analysis in Part 5 with the defensive mechanisms of denial and cognitive dissonance.

“I admit that I seriously resist anyone messing with my worldview,” a friend remarked to me as she hurried out of the room.

I didn't get an opportunity to acknowledge her honesty at the time. When I mentioned it to her weeks later, she had no recollection of making any such statement.

This friend isn't alone in forgetting her candid response. Some people who resist looking at the 9/11 evidence through any lens other than officialdom's are unable to recall their own spontaneous honest admissions — even minutes later. This forgetfulness, I believe, attests to the depth of their resistance — and the strength of their defense mechanisms — when it comes to the sensitive subject of 9/11.

I recall how another acquaintance fended off the truth by declaring haughtily, “I can think of so many other explanations for the 9/11 events you mention.” His deflection of the actual evidence I had shared with him was, I think, a defensive attempt to minimize the facts I had presented. Despite his attempt to appear intelligent, he came across as studiously lacking in curiosity and devoid of the spirit of true inquiry.

Then there was the close friend who told me, “Fran, you can’t expect someone to listen to information that turns their world upside down.” Five minutes later I asked her to repeat what she had said, but she couldn't recall her words and got lost in confabulation.1

A final example of defensiveness — if not downright intransigence — is this revealing statement reported by Richard Gage when he introduced the “Seeking Understanding” section of the film 9/11: Explosive Evidence — Experts Speak Out: “I wouldn’t believe that even if it were true!”

All these illustrations go to prove that when we're faced with facts that are too uncomfortable to accept, we reject them outright or we downplay their importance. This defense mechanism is known in psychologists' parlance as "denial."

Humans resort to denial to avoid the anxiety that accompanies cognitive dissonance — that uncomfortable, sometimes disturbing feeling of losing our emotional equilibrium when we are faced with new information that challenges our worldview or when we hold beliefs that contradict known facts. The discomfort motivates us to change our behavior, change our cognition, and/or justify our behavior by acquiring a secondary cognition. This dynamic is common to us all.2 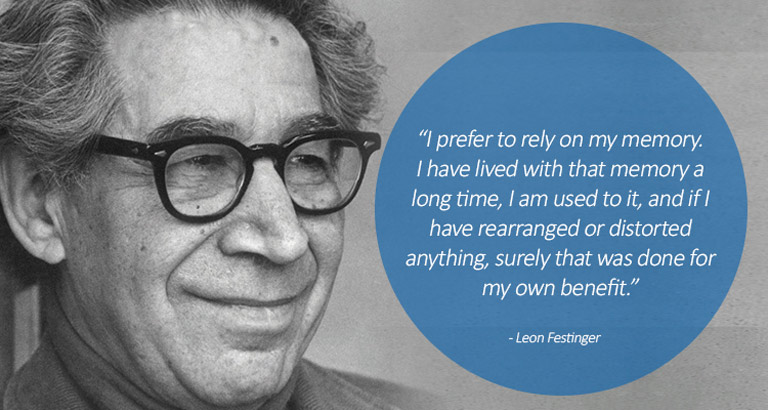 The term “cognitive dissonance” was coined by social psychologist Leon Festinger and his colleagues.3 Festinger infiltrated a small UFO cult,4 led by a Chicago housewife Dorothy Martin, who had experimented with automatic writing, also known as channeled writing. To protect her privacy, Festinger's study gave Martin the alias of “Marion Keech.” The members of the cult were informed, through Keech’s automatic writing, that a flood would end the world before dawn on December 21, 1954. However, according to Keech's channeled writing, this small group of believers would be rescued from the apocalypse at a specific time by aliens in a flying saucer from a planet named “Clarion.” 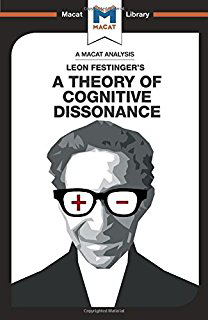 Social psychologists Festinger et al. accurately predicted how the cult members would behave when the aliens did not show up. When, at the appointed time, there was no sign of any alien, the cognitive dissonance (tension, fear) created by their challenged belief (a sacred myth5 for this small “in” group) was resolved by another automatic-writing message from Keech. It said that God had spared Earth from destruction due to the light spread by this little band of true believers. Thus, a secondary cognition was created to mitigate the cognitive dissonance caused by the disconfirmed belief. As Festinger and his colleagues predicted, the group initiated intensive proselytizing, rather than responding more logically by reconsidering the validity of the original belief (by changing their cognition) and then acting accordingly (changing their behavior).

The followers of Keech may have been severely psychologically wounded individuals who needed to believe they would be saved. Although most of us would not have been swayed by a deluded Keech-type figure, we might well be swayed by another charismatic leader whose manipulative power is subtler or who presents us with a less obvious delusion.

When 9/11 evidence contradicts the official account (a sacred myth of our culture), we observe that some people try to resolve the tension of cognitive dissonance by devising secondary beliefs, as did the Marion Keech followers.

Take, for example, the ardent George W. Bush supporter who assured me that since she could no longer deny the reality of controlled demolition of the three World Trade Center buildings, she had come up with a foolproof explanation for 9/11. “I know how this happened," she announced proudly. "During reconstruction of the [North] tower after the 1993 bombing, explosives were planted in both Twin Towers by members of Bill Clinton’s cabal.”

But hold on. From the other side of the political aisle, a woman offered her analysis with equal confidence: “Obama surely did not know about this 9/11 evidence before he was elected.6 Maybe he knows now, but he can't say anything to us. If the country knew the truth about 9/11, there would be chaos. The stock market would plummet. He'd probably like to tell us, but he can't.”

Devising secondary beliefs in an attempt to reconcile cognitive dissonance isn't at all uncommon. Neither is putting naïve trust in the political party with which we identify and a president for whom we have voted.

Thus, it behooves us, whether we are activists or not, to recognize the importance of becoming genuinely autonomous, psychologically secure humans. This way we are less apt to be vulnerable to denial — the unconscious act of rejecting hard-to-accept facts. We must also cultivate a discerning mind, so that we are able to discriminate between facts and speculation. With genuine autonomy, a discerning mind, and a commitment to discovering truth, we can think and speak knowledgably when we encounter evidence that supports neither an “official story” nor a charismatic leader's persuasive words. Indeed, autonomy, discernment, and truth-seeking enable us to open — and change — our minds after having been emotionally and intellectually anchored to a previously held official account or worldview.

Holding a radically different opinion from one's otherwise like-minded peers can often take far greater courage than it does to confront the beliefs of people who you and your peers perceive as a shared enemy. This is especially so when challenging the sacred myths held by one's peer group. That's because rejection, alienation, and ultimately banishment by those we love and respect is such an intimidating prospect. As we will see in the Asch conformity experiments described next, fear of disapproval or rejection is a key motivating factor of those who yield their own correct perceptions to the wrong answers of their peers.

1 Confabulation means to fill in gaps in memory by fabrication.

4 Any point of view that resides outside conventional thinking, including the UFO issue, can foster ridicule; this is not my intention here.

5 A sacred myth is a belief in any culture, whether completely true, partially true, or not at all true, that tells us who we are and why we do what we do. For further explanation, see David Ray Griffin, Ph.D., “9/11: The Myth and the Reality,” http://www.amazon.com/9-11-The-Myth-Reality/dp/B000O0YV7O and http://davidraygriffin.com/articles/911-the-myth-and-the-reality.

6 The late Col. Robert Bowman, who directed the Star Wars program under Presidents Ford and Carter (when it was secret) and who subsequently exposed this program as an offensive threat, not a defensive shield, told several of us 9/11 Truth activists in Denver that he had met with Barack Obama’s campaign director during the candidate’s 2008 campaign for president. They spoke for more than an hour about the evidence pointing to the official account of 9/11 being untrue.