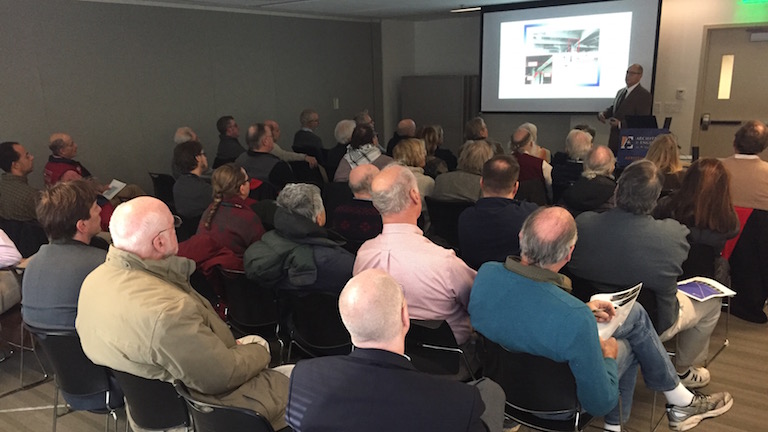 In-person 50-minute presentation with a slideshow, followed by a 10-minute Q&A.

Call (510) 292-4710 or email This email address is being protected from spambots. You need JavaScript enabled to view it. to arrange a presentation at your firm, AIA chapter, or state/regional convention.

Never before has a steel-framed high-rise building collapsed from fire. Why, then, did World Trade Center Building 7, a 47-story office building in Lower Manhattan, collapse late in the afternoon on 9/11?

It was not struck by an airplane. The damage it suffered from the collapse of the North Tower was found to be inconsequential. It had fires that were similar to those that have occurred previously in high-rise buildings. Yet it fell symmetrically into its own footprint in the manner of a typical controlled demolition.

In 2008, the National Institute of Standards and Technology (NIST) concluded that Building 7’s collapse was caused by normal office fires that burned “at temperatures hundreds of degrees below those typically considered in design practice for establishing structural fire resistance ratings.”

Is NIST’s explanation for this unprecedented structural failure valid? Together, we will study the collapse and evaluate which of the two hypotheses — fire-induced failure or controlled demolition — is more consistent with the evidence. Participants will be encouraged to decide for themselves if a new investigation of Building 7’s collapse is warranted.