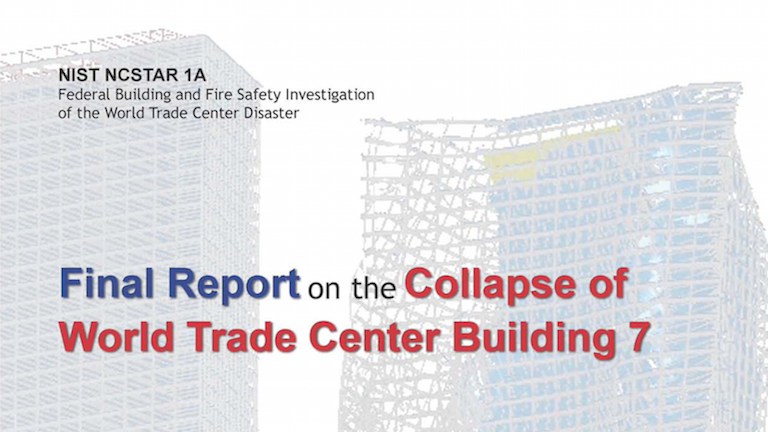 The NIST Analyses: A Close Look at WTC 7

The following comments and questions describe why I consider the Final Reports NCSTAR 1A, 1-9 and 1-9A to be incomplete, inconsistent and erroneous. Sincere thanks are due to Chris Sarns, Gregg Roberts, David Chandler and Dwain Deets for their helpful comments. I hope many others will spend the time to evaluate the NCSTAR reports carefully, follow the references herein, and draw their own conclusion. Public disclosure of one's convictions is always a risk, but silent acceptance is not an option. Permission is granted to reprint or quote excerpts freely and solely without charge.

Many architects, engineers and others have never seen the rapid descent of the 47-story World Trade Center Building Seven (WTC 7) into its footprint in less than seven seconds on the afternoon of September 11, 2001. This unprecedented event—the first steel-frame building in history to collapse suddenly and completely following an uncontrolled office fire—was captured on film from various angles. Engineers at the National Institute of Standards and Technology (NIST) performed extensive thermal and structural analyses of the building in an attempt to explain the complete collapse in terms of impact damage, fire damage, column buckling and progressive collapse. This extraordinary effort by NIST provides a close-up view inside WTC 7 during the final hours, minutes and seconds before its precipitous fall. But the discovery of extreme temperatures as well as residues of molten iron and highly reactive pyrotechnic material in the World Trade Center debris invalidates the NIST conclusions, and further independent investigation is required.

The purpose of this article is to closely examine the contents of the final National Construction Safety Team Act Report (NCSTAR) numbers 1A, 1-9 and 1-9A in an effort to understand the NIST hypotheses, methods of analysis and conclusions. Careful examination is necessary to verify how NIST has fulfilled its duty to the public as required by the National Construction Safety Team (NCST) Act of 2002. One of the duties charged to NIST under this law is to establish the most likely technical cause of the building failure; NIST has succeeded in casting serious doubt on the credibility of its conclusions by focusing solely on the analytical aspects and by ignoring relevant physical and testimonial evidence. This article does not constitute proof that explosives were present in the building. Simply demonstrating that NIST has not fulfilled its mandatory duty to the public is sufficient grounds to call for a new investigation of the incident, and any meaningful investigation must account for all of the relevant evidence. More than a year has elapsed since the final reports were issued in November 2008, and the goal of this article is to establish agreement—supported by facts—that a new investigation is necessary to explain the complete destruction of WTC 7.

Read the article in PDF format.