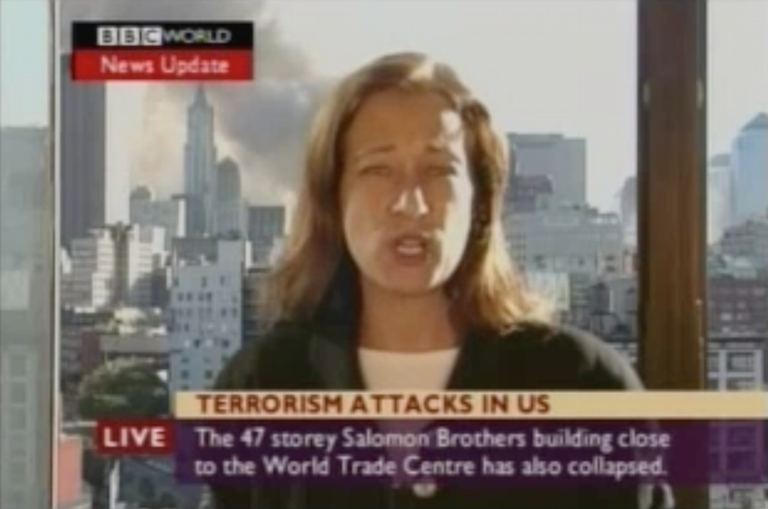 How Did They Know? Examining the Foreknowledge of Building 7's Destruction

WTC Building 7, also known as the Salomon Brothers Building or WTC 7, was a 47–story skyscraper that was part of the World Trade Center complex. Built in 1984, Building 7 would have been the tallest high–rise in thirty–three of our United States. Building 7 housed several intelligence and law enforcement agencies, and the NYC Office of Emergency Management’s Emergency Operations Center, more commonly known as “Giuliani’s Bunker,” along with several major financial institutions.

Building 7, which was 100 yards from the Twin Towers, was not hit by an airplane on September 11, 2001, and suffered only minimal damage from debris falling from the North Tower. Several fires began burning on a few floors, and the entire building completely collapsed – almost into its own footprint – at 5:20 p.m. Numerous eyewitnesses, including members of the Fire Department of New York (FDNY) and other first responders, and multiple news sources, made statements that indicate that there was foreknowledge that WTC 7 was going to come down, despite the fact that no skyscraper in history had ever completely collapsed due to fire.

To worry that a damaged building might collapse in some fashion is one thing. But to be certain that it will collapse is another. A detailed study of the FDNY accounts by 9/11 researcher Graeme MacQueen shows that more than half of those who received warnings of WTC 7’s collapse (where a degree of certainty can be determined from the reports) were certain or were told with certainty that Building 7 was coming down. (The figures calculate to 31 out of 58. See MacQueen’s report “Waiting for Seven…” at page 4.) 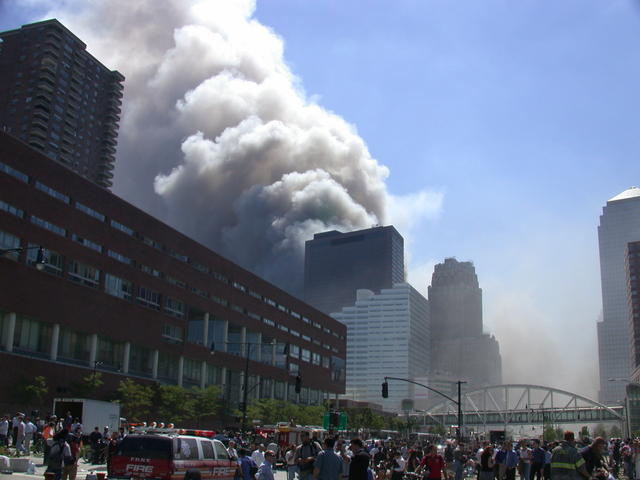 The FDNY spent the afternoon of 9/11 waiting for WTC 7's collapse.

If someone were observing the fires in WTC 7 and able to determine, in the last few moments of the building’s existence, that a peculiar set of circumstances was beginning to threaten the building, that would be one thing. But to receive warnings of the building’s collapse well before this set of circumstances arose raises suspicion. Yet, a detailed study of the FDNY reports shows that of the thirty-three cases where the time of warning can be determined, in ten cases warnings were received two or more hours in advance, and in six cases warnings were apparently received four or more hours in advance. (See MacQueen’s “Waiting for Seven…” at page 4.) In other words, the warnings came long before the unique set of circumstances had allegedly come together to cause the building’s collapse.

If the collapse warnings were derived from vague worries and concerns, as claimed by the National Institute of Standards and Technology (NIST), the warnings would not have been precise. A complete collapse, such as happened to WTC 1, WTC 2, and WTC 7 on 9/11, was unknown – unless the building was being brought down by controlled demolition. That is why FDNY member James McGlynn could say on 9/11, in reference to one of the Towers, “Any time I’ve heard of a collapse, it was never an entire building like this turned out to be.” (See MacQueen’s “Waiting for Seven‚” at page 21.) Nevertheless, somehow, many people knew in advance that WTC 7 would suffer an unprecedented collapse. Which begs the question, “How did they know?” Consider the following exchange from the FDNY oral histories: 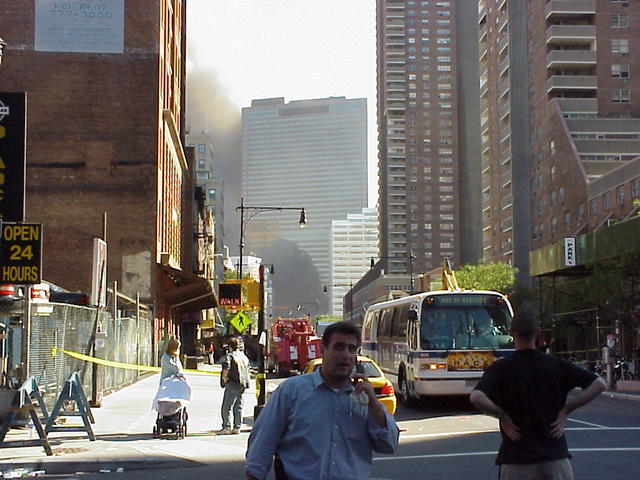 WTC 7 is seen from the north, where a safety zone was established in anticipation of the collapse.

Q. “Were you there when building 7 came down in the afternoon?”
A: “Yes”
Q. “You were still there?”
A. “Yes, so basically they measured out how far the building was going to come, so we knew exactly where we could stand.”
Q. “So they just put you in a safe area, safe enough for when that building came down?“
A. “Five blocks. Five blocks away. We still could see. Exactly right on point, the cloud stopped right there.”(See MacQueen’s “Waiting for Seven,” at page 8.)

It is quite remarkable that a debris cloud estimate could be so precise for a collapse that was supposedly caused by unforeseen and unplanned events. Had Building 7 “tipped over,” which would have been more realistic, given the structural damage that was supposed to be the reason for its collapse, the building could actually have ended up crushing several other tall buildings, creating a destruction zone much farther away from the building. 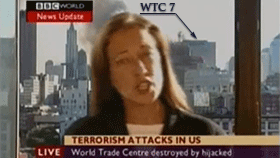 BBC correspondent Jane Standley reported the destruction of WTC 7 before it collapsed – even though the building was still standing behind her.

In this BBC video, correspondent Jane Standley reports that Building 7 has collapsed; meanwhile, a fully intact Building 7 can actually be seen — still standing — behind her. Who fed this information to Standley? Apparently, someone who had inside information about, and/or control over, the event itself, released that information to the media prematurely.

In another news clip, while Building 7 is seen standing fully erect and showing no signs of impending trauma, CNN’s Aaron Brown gives the following report: “We are getting information now that one of the other buildings, Building 7, in the World Trade Center complex, is on fire and has either collapsed or is collapsing…” Who is he “getting information” from? Again, it appears to be from someone who had inside information about, and/or control over, the event itself, and who released that information to the media prematurely. Only such an individual could have expected Building 7 to come down. 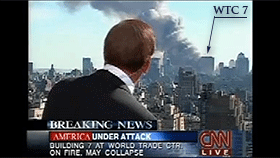 CNN’s Aaron Brown searches for WTC 7 in the New York skyline after reporting that it had collapsed an hour early.

In sum, both CNN and BBC did not merely report that WTC 7 was damaged or that it might collapse. Instead, they prematurely announced the actual collapse of Building 7. No satisfactory explanation has been given about these premature announcements, which were obviously based on data fed to the announcers, apparently by an unknown person or persons who had inside information about, and/or control over, the event itself, and who bungled matters by releasing that information to the media prematurely. 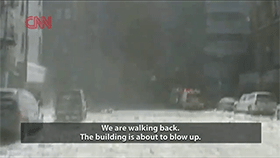 How did construction workers and police on the scene of WTC 7 that afternoon know that “The building is about to blow up”?

These reports were later corroborated by first responder Indira Singh, who, in a radio interview about Building 7, revealed that the FDNY had stated that “We’re going to have to bring it down.“ 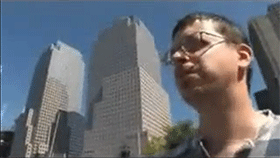 The testimony of Kevin McPadden, an emergency medical technician and 9/11 first responder, is even more shocking. In a taped interview, McPadden indicated that there was an actual countdown preceding Building 7’s collapse:

“The Red Cross rep was like, he goes over and he says [to us], ‘You gotta stay behind this line because they’re thinking about bringing the building down.’…He goes over and he asks one of the…firefighters what was going on…He came back over with his hand over the radio and [you could hear] what sounded like a countdown. And, at the last few seconds, he took his hand off [the radio] and you heard ‘three-two-one,’ and he was just saying, ‘Just run for your life! Just run for your life!’ And then it was like another two, three seconds, you heard explosions. Like, BA-BOOOOOM! And it’s like a distinct sound…BA-BOOOOOM! And you felt a rumble in the ground, like, almost like you wanted to grab onto something. That, to me, I knew that was an explosion. There was no doubt in my mind…”

NIST has tried to evade the issue of foreknowledge of WTC 7’s collapse in its report on the building’s destruction by implying:

It is true that damage to WTC 7 was directly witnessed by some firefighters and, apparently, led a few (about seven) of them to worry that the building might collapse. However, the great majority (approximately fifty) who were worried about collapse did not base this worry on the physical damage but on what they were told. (See MacQueen’s “Waiting for Seven,” at page 5.) Moreover, while an engineer may have communicated his opinion, early in the day, that the building might collapse, neither this communication nor communications from the FDNY is sufficient to explain all of the collective evidence indicating foreknowledge of Building 7’s collapse.

Individually, each of the factors discussed above indicates the possibility of foreknowledge of Building 7’s collapse: the certainty of Building 7’s impending collapse as expressed and memorialized in the FDNY oral histories, the early announcements made by the FDNY, the precise nature of the early announcements, CNN’s and the BBC’s premature reporting of Building 7’s collapse, and the actual countdown to Building 7’s demise. Collectively, these factors provide evidence beyond a reasonable doubt that this foreknowledge is most readily explained by the fact that Building 7 was brought down in an explosive controlled demolition carefully planned months in advance.