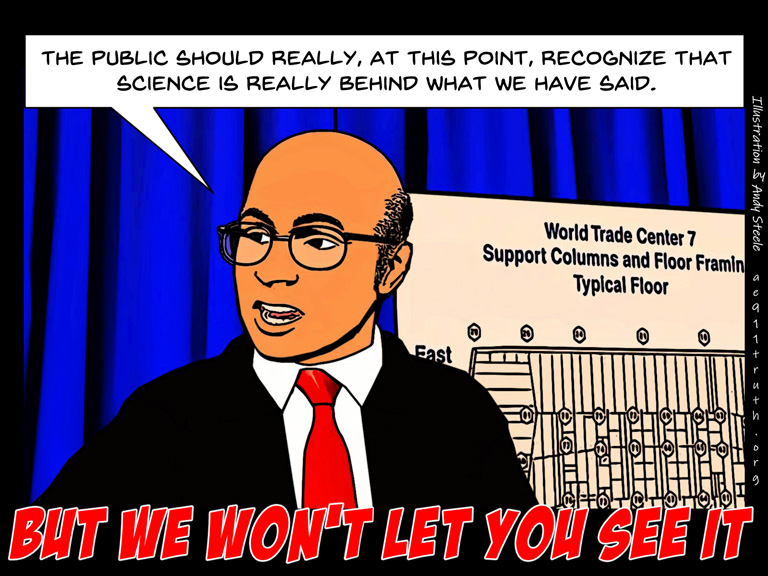 After 10 years of refusing to release key data from its analysis of the destruction of World Trade Center Building 7, the National Institute of Standards and Technology (NIST) has published a new FAQ on its website defending its ludicrous position that the release of this data “might jeopardize public safety.”

Borrowing from earlier denials of FOIA requests and court filings made by NIST and the U.S. Department of Commerce, the FAQ reads:

NIST issued the FAQ in response to more than 170 activists who, prompted by AE911Truth, contacted NIST Director Walter Copan asking him to annul the 2009 “Finding Regarding Public Safety Information” — and then, once NIST declined to do so, activists again wrote to Copan at the urging of AE911Truth asking him: “How exactly could terrorists use this data to devise ways to destroy buildings?” Yet the FAQ fails to provide a plausible scenario of how this could happen.

Instead, the FAQ points to an April 7, 2011, decision by the U.S. District Court for the District of Columbia upholding NIST’s “finding” — as if the court decision makes NIST’s position scientifically and ethically right. Federal courts are known to be overly deferential when it comes to agencies’ decisions to classify information. The legal standard in this case was that NIST’s explanation merely needed to be “logical” and “plausible.” In reality, it is neither of those, but the court was never going to find against NIST.

The upshot is that 11 years after NIST published its report on Building 7 — with its lead investigator, Dr. Shyam Sunder, admonishing the public to “recognize that science is really behind what we have said” — the agency has not released a single document or file that substantiates the initiating failure in its elaborate, far-fetched, and now-debunked scenario of the building’s destruction.

After a supporter of AE911Truth approached Director Copan at an event in the fall of 2018 and NIST then followed up to ask which information he was seeking, Richard Gage wrote to Copan on behalf of the supporter requesting any documents not currently exempt from disclosure that substantiate the reported walk-off of girder A2001 at Column 79. (This is the alleged failure that took NIST five years of head-scratching to come up with and that we are supposed to believe set off a Rube Goldberg-style chain reaction that turned the building into a neat pile of rubble in a matter of seconds.) But Copan did not respond to Gage.

With the publication of this latest FAQ, it is now out in the open for all to see that NIST’s refusal to release key data related to its Building 7 investigation has nothing to do with protecting public safety and everything to do with protecting its analysis from independent scrutiny. Surely, if NIST believed its analysis to be correct and above board, it would have made all of its data available long ago — just as researchers at the University of Alaska Fairbanks (UAF) have done regarding their four-year study on Building 7.

While NIST has resisted growing calls for transparency and honesty, it can be sure the pressure will continue to mount with the imminent release of the UAF final report.